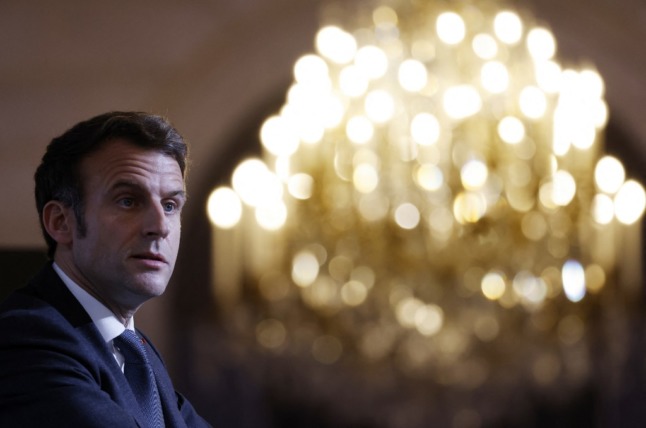 This week’s presidential schedule, released on Monday, sparked speculation that Macron might announce his candidacy on Thursday or Friday when no formal events have been planned, but spokesman Gabriel Attal ruled it out.

“There are a lot of events at the moment that require his full attention… and do not give him much scope to express himself as a campaigner,” Attal told Franceinfo, replying “no” when asked if it was time for Macron to formalise his bid.

Attal said Macron was holding intense daily talks with world leaders on the crisis between Russia and Ukraine, as well as working with the government on removing Covid-19 restrictions while cases remained high.

“The French wouldn’t understand if these days the president were to express himself on his election campaign,” he said.

Candidates can now begin the formal process of parrainage – obtaining the required 500 endorsements from local officials that are necessary to secure a place on the ballot paper. The deadline to have obtained these is March 4th.

Macron’s rivals have accused him of deliberately delaying the announcement so as to take advantage of his office to make media appearances and defend his record without being seen as candidate.

But Attal denied this.

“I don’t think it’s an advantage for us, quite the opposite. Maybe it’s a handicap not to be able to be in the campaign right now while the opposition is,” he added.

OPINION: Macron might not admit it, but he’s on the campaign trail

France also holds the rotating presidency of the European Union, with Macron keen to use the time to press his agenda for boosting the military and diplomatic clout of the 27-member bloc.

Aides to Macron, 44, who is widely tipped to win a second term, have also argued against an announcement in the short term.

“There’s a window of opportunity for him to declare his candidacy between February 10th and 20th,” one presidential aide told AFP on condition of anonymity.

“The health crisis needs to be behind us and we need to be neither in an international crisis nor on the threshold of a major EU event,” the aide said.

A new poll out on Monday by the Ifop-Fidicial survey group suggested that Macron would win the first round of the presidential election on April with 24 percent of the vote.

Far-right leader Marine Le Pen and conservative Valérie Pécresse from the centre-right Les Républicains party are seen as competing for the other spot in the second-round run-off scheduled for April 24th.

In the second-round run-off, Macron was projected to beat Le Pen by a margin of 55-45 percent, or Pecresse by 54-46 percent.