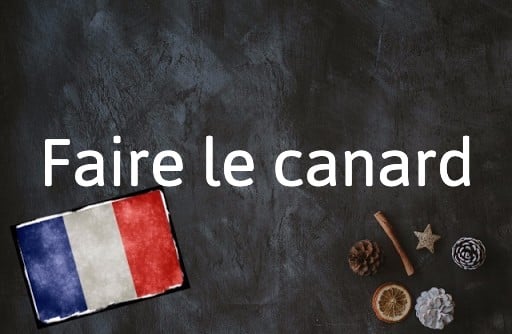 Why do I need to know faire le canard?

Because who said romance is dead?

Some of our younger readers may understand it to mean behaving like a ‘simp’ or a ‘shweff’.

You can also jouer le canard and être canard.

The word canard, means ‘duck’. To understand the expression, imagine a new-born duckling incessantly following its mother around the farm yard – that is the inter-species Freudian imagery that this phrase evokes to portray someone pursuing a romantic partner.

This slang phrase is particularly common in and around Marseille, but is widely understood by anyone under the age of 35.

You should not confuse faire le canard with faire un canard. The latter phrase is typically used to describe what a musician who plays a wrong note on a musical instrument.

Vas-y canard – Go on then, lover-boy

The following expressions are all considered to be informal and more appropriate for spoken conversations between friends rather than sincere or professional communication:

Faire le David Beckham (this one is less common, but does appear on the prestigious dictionary of urban slang, weshipedia).

Why do I need to know t’inquiète?

Because you might be wondering why people keep telling you to worry all the time.

It’s a good example of the difference between spoken and written French.

It is the ‘tu’ conjugation of the verb ‘S’inquieter’ which means to worry.

The command “don’t worry,” which is reflexive in French, should actually be written as “ne t’inquiète pas” (do not worry yourself).

But in colloquial speech this is often shortened it to t’inquiète pas or simply t’inquiète.

It’s one of many examples where the ne of the ne . . pas negative form disappears in spoken French.

This is in the ‘tu’ form, meaning it is informal, it’s not rude but you might not want to tell your boss to t’inquiete.

If you want a ‘no problem/don’t worry about it’ type response, especially if someone has apologised for something, you could say Ce n’est pas grave (it’s not serious)

While you can also use Pas de soucis to say ‘no worries’, although that is slightly controversial and more often used by younger people.