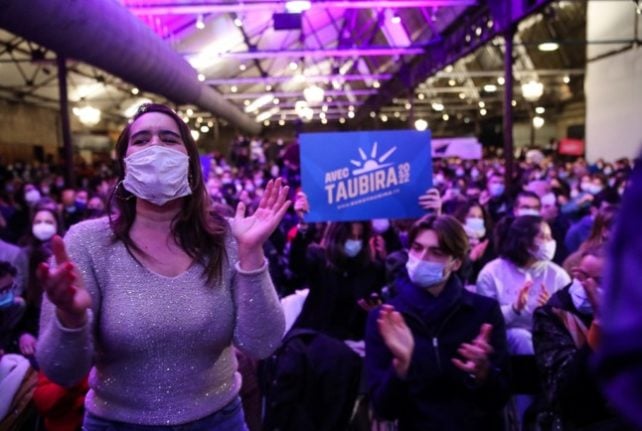 Campaigning for the Popular Primary of the French left. Photo: Romain Perrocheau/AFP

The curious system used to grade French presidential candidates in the Popular Primary of the Left was invented by mathematicians. They were inspired by scoring techniques in wine-tasting and ice-skating.

The outcome: this will be no vintage year for the French Left. There will be no double-axel leap to the top of the polls.

The result of the Primaire Populaire, announced last night, sounded like a pastiche of an end of term school report.

Christiane Taubira, the former justice minister, came top of class with a “bien plus” (better than good but not very good).

The mayor of Paris, Anne Hidalgo, the Socialist candidate in April’s presidential election came a humiliating fifth with “passable plus” (slightly more than adequate).

The last of the seven candidates selected by the organisers was the green campaigner Anna Agueb-Porterie who was judged “insuffisant” (inadequate). Never heard of her? Don’t worry. Nor have most people in France.

The popular primary was not really a primary, more like a complicated opinion poll. Was it “popular”? Yes, in a way it was.

Almost 500,000 people signed up to take part and 392,738 (80.1 percent) of them voted. That is not bad for an independent exercise, invented a few months ago by left-wing academics and activists.

The intention was to encourage the scattered Left to unite behind a single candidate before the first round of the presidential election on April 10th. By that measure, it was a disaster.

The three best-known candidates – the hard-left Jean-Luc Mélenchon, the Green Yannick Jadot and the Socialist Anne Hidalgo – refused to recognise the exercise. They have dismissed the result as meaningless and they will continue their own campaigns.

As a result, the number of left-wing candidates chasing roughly 27 percent of the first-round vote will increase, not diminish. Ms Taubira, a poetic orator without a coherent programme (so far), will enter the race in the hope that her victory in the Popular Primary will boost her current 3 percent rating in national opinion polls.

In the four days of online voting which ended yesterday, she came first because 60 percent of the self-selected electorate judged her to be “bien”.

The voters did not give the candidates a numerical mark or place them in order of preference. They awarded each of the candidates one of five labels, from “good” to “inadequate”. After crunching their votes, a computer programme gave overall grades to the seven candidates.

Will this be enough to give Ms Taubira a boost in the polls? I doubt it.

I once spent a day with her when she was justice minister under President François Hollande. She is an admirable and impressive woman: a great public speaker; a theorist of the moral superiority of the Left and the moral duty of left-wingers to unite.

As justice minister, her record was more than competent. She pushed through the “marriage pour tous”, gay marriage law despite a campaign of racist insults from the Right and Far Right. Her French West-Indian ancestry (she was born in French Guiana) seemed to anger the Catholic haute bourgeoisie as much as her legislation. On one occasion, the children of anti-gay marriage campaigners threw bananas at her.

My problem with Ms Taubira is her age – 70 on Wednesday – and her lack of any coherent programme of government. To make an appeal for the “unity”, however poetic, will not dissolve overnight the personal ambitions, ideological divisions and vested party interests of the French Left.

Here is the great irony of the Primaire Populaire. It was devised partly to reduce the power of opinion polls which are often the real king and queen makers of French elections. With ten weeks to the first round, it will now be the opinion polls which decide whether Ms Taubira is a viable candidate and whether any strongish left-wing candidate can emerge from a pack of seven.

I think that if one left-winger does pull ahead of the pack it is much more likely to be Jean-Luc Mélenchon of the hard left La France Insoumise (France Unbowed). He is already ahead of the others on 9-10 percent, even 12 percent in one poll. He may benefit – as he did in 2017 – from the phenomenon of the “useful vote”, the wish of despondent left-wing voters to see at least one representative of the Left competing for the two places in Round Two.

The other mainstream Left candidates, Hidalgo for the Socialists and Jadot for the Greens, will not drop out for either Taubira or Mélenchon. They may know they have no realistic chance of reaching the run-off, let alone winning the presidency, but they have to pursue their campaigns to protect the interests of their party “brands”.

Neither the Socialists nor the Greens are able to inspire large groups of voters at national level. They both remain strong in big-city France and will hope – for party survival and party finances amongst other things – to win or hold parliamentary seats in the national assembly elections in June.

So the Popular Primary was a waste of time?

Not necessarily. As an exercise in grass-roots democracy, it answered a genuine demand in France for direct, popular influence on the political process (remember the Gilets Jaunes).

In the longer run – 2027 and beyond – the Primaire Populaire,  or something like it, may provide a vehicle for the creation of a realistic, unified movement of the French Left/greens.