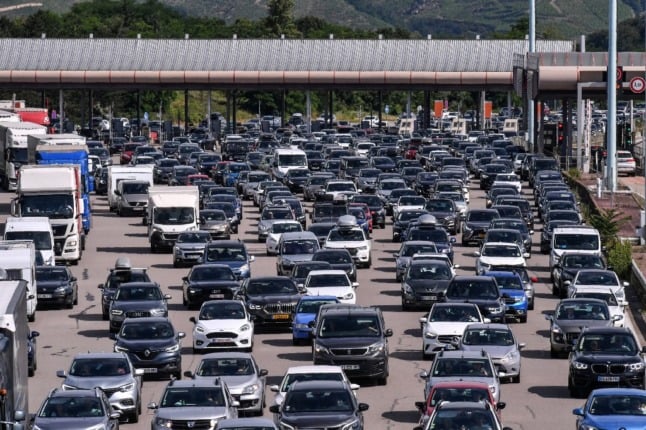 Motorists drive through the A7 toll booth in France. The cost of using French motorways is set to increase from February 1st 2022. (Photo by PHILIPPE DESMAZES / AFP)

French motorways are generally managed by private companies who hold lease agreements with the government.

Toll-fees, the proceeds of which are partly used for maintenance costs, increase every year in-line with inflation.

From February 1st, autoroutes across the country will introduce higher toll-fees, but the degree to which drivers will experience increased costs depends what kind of vehicle they use.

The next determining factor for how significant the price rise will be depends on which company is operating the road you use.

The management of roads is broken down as follows:

Cofiroute operates the following roads: the A10 (Paris to Poitiers), A11(Paris-Le Mans and Angers-Nantes), A28 (Alençon to Tours), A71 (Orléans to Clermont Ferrand), A81 (Le Mans-Laval), A85 (Angers to Vierzon), and the A86 (Rueil-Malmaison to Vélizy-Villacoublay).

Class 1 vehicles using these roads will see a toll price increase of 1.896 percent.

READ MORE How hard is it to swap your driving licence for a French one?

All classes of vehicles using these roads will see toll-prices rise by 2.191 percent. The actual amount you are charged depends on how far drive on the road.

SANEF stands for the Société des Autoroutes du Nord et de l’Est de la France (The motorway company of the North and East of France). It comprises of the following motorways extending through the greater Paris Île-de-France region, Normandy, Picardie, Nord-Pas-de-Calais, Champagne and Alsace: A1, A2, A4, A16, A26 and A29.

Class 1 vehicles will see tolls increase on these motorways by 1.911 percent.

SAPN is part of the SANEF group and operates the following roads in Ile-de-France and Normandy: the A14, A13 and the A29.

Class 1 vehicles on these roads will be charged an extra 2.119 percent.

The exception to this rule is at the Gare de Montesson and Gare de Chambourcy booths on the A14, where the following tarifs apply regardless of distance travelled.

APRR is the second largest motorway operator in France, running a network of roads that connect Paris with Champagne-Ardenne, la Franche-Comté, la Bourgogne, la Lorraine, l’Alsace and the Rhône-Alpes region among others.

Class 1 vehicles operating on these roads will see a price increase of between 2.050 to 2.051 percent.

Class 1 vehicles using these roads will be subject to a up to a 2.061 percent increase in toll fees.

It is increasing fees for all vehicle types by 2.051 percent.

STRF operates the tunnel at Fréjus in the Provence-Alpes-Côte d’Azur département; CEVM operates the viaduct of Millau in Occitane; ALIS operates the A28 from Rouen to Alençon; ARCOUR runs the A19 from Artenay to Courteney; ADELAC runs the A41 between Annecy (France) and Geneva (Switzerland); A’LIENOR runs the A65 between Langon and Pau in southwest France; Alicorne runs the A88 road between Caen and Le Mans; Atlandes runs the A63 which runs from Salles to Saint-Geours-de-Maremne; and ALBEA runs the A150 to the northwest of Rouen.

These operators will all introduce hikes to toll prices.

The heftiest fees will be class 4 vehicle drivers. Those crossing the viaduct of Millau for example will have to pay €40.30 and those driving across the A28 may have to pay up to €86.70.

A full list of prices is available in the annexes of this official notice.

The group has said that journeys of less than 50km along its roads will not be subject to the aforementioned price increases, with tarifs frozen – for now.

While France is set to introduce a frictionless motorway toll system by 2024, most drivers currently pay in cash or by card at motorway toll booths.

Vinci Autoroutes has introduced an e-badge that drivers can use to debit the cost of journey’s directly to their accounts rather than paying for journeys directly at toll booths. You can read more about the product here.

DRIVING
COMPARE: Which countries in Europe have the strictest drink-drive limits?

READER INSIGHTS
Tell us: Do you have questions about travel to/from France this summer?
Url copied to clipboard!