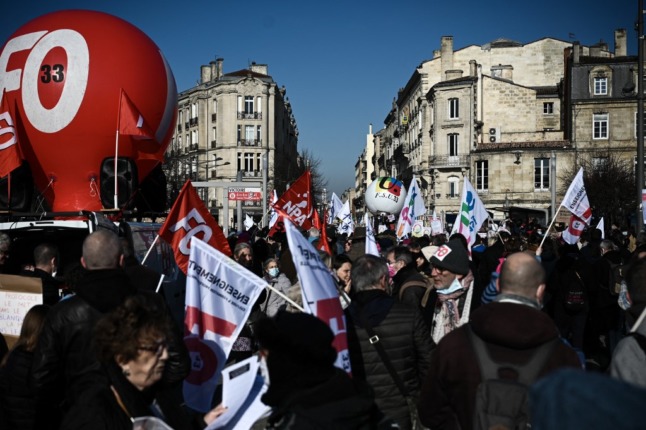 Teachers take part in a mass strike in France. Another day of action, this time across all sectors, will take place on Thursday. (Photo by Philippe LOPEZ / AFP)

Teachers are among those set to protest on Thursday as part of a mobilisation interprofessionnelle (cross-sector demonstration) for a salary increases.

170 demonstrations and marches have been scheduled across France according to the CGT, one of the country’s biggest unions which has organised the demonstrations along with FO, FSU and Solidaires unions.

“No one can ignore the social and economic context, the price rises of essential products from food to energy and finally, the cost of living,” said the union in a statement.

France experienced an inflation rate of 2.8 percent over the course of 2021 and workers say their budgets have been squeezed.

“It is urgent and essential to act in unity through striking and protests for an immediate increase of all salaries in the private and public sector, payments for young people in training or looking for work and to improve the pensions of retired people.”

The previous two Thursdays have seen strikes from teachers, but unions predict that this week only 20 percent of teachers in French primary schools and kindergartens would be on strike. This is a significant drop-off from two weeks ago when 3 out of 4 such teachers walked out in protest of the government’s handling of the pandemic in schools.

The CGT has made an interactive map which shows where the protests will take place and at what time. Its members will march alongside other major trade unions such as the FO, FSU and Solidaires.

In Paris, a march has been scheduled to begin at 11:30am at the place de la Bastille and will proceed slowly towards the Economy Ministry in the 12th arrondissement.

This will likely hold up traffic in central Paris.

Prime Minister Jean Castex has announced a number of measures to help offset the cost of inflation, including a tax break for drivers, a freeze in energy prices and a special energy grant for poorer French households.

But unions say that this is not enough and left-wing candidates in the 2022 presidential elections including Communist Fabien Roussel,  Green Yannick Jadot and far-left Jean-Luc Mélenchon have said that they will be joining the marches.