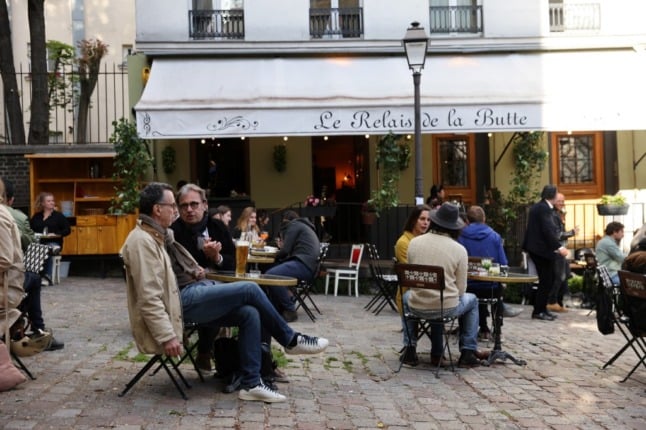 Having a beer in a café now requires proof of vaccination. Photo: Thomas Coex/AFP

If you are not fully vaccinated (which includes a booster shot for most adults, including those who are only visiting France) you will need either a certificate of Covid recovery or a certificate of medical exemption to enter the above venues.

Both the recovery certificates and medical exemptions need to conform to French formats – you can find them HERE and HERE.

The vaccine pass is required for everyone aged 16 and above, while children aged 12-15 can continue to use the health pass, which allows for a negative Covid test no more than 24 hours old.

Booster shots – Also on Monday, the Covid vaccine booster shot programme opens up to under 18s – here’s how teens and their parents can book appointments.

Rail strike – a rail strike on Monday will affect travel in the south west of the country as workers walk out in a dispute over pay and pensions.

Anti-conversion therapy law – MPs adopt a law banning the use of so-called ‘conversion therapy’ for gay people. Although such practices were previously illegal, prosecutions relied on charges of assault or false imprisonment, rather a specifically targeted law.

Strike – there are calls for workers at electricity supplier EDF to strike in protest at the government measures to contain energy prices.

Film awards – publication of nominations for the 2022 César film awards, the French equivalent of the Oscars.

Left primary – voting begins on the Primaire populaire de la gauche – this is an attempt by the French left to unite under a single candidate in the 2022 presidential elections, rather than spilt the vote between multiple candidates from leftist and green parties. However, several high-profile candidates have said they will not take part.

Schools strike – teaching unions have called for another one-day strike in protest over the government’s handling of Covid in schools. This will be the third consecutive Thursday of strikes, although last week saw just 2.5 percent of teachers walk out, according to the Interior Ministry. Unions say they are focusing on January 27th for a major day of action and protests.

READ ALSO Why are French teachers striking and what does it have to do with Ibiza?

Winter sales – The sales end in Meurthe-et-Moselle, Moselle, Meuse and Vosges. These départements, all in border areas, began their sales period earlier than the rest of France. In the rest of the country, sales run until Tuesday, February 8th.

Double payments – Sunday was the original end date for a scheme that gave double payments to any medical personal for overtime hours. However, health minister Olivier Véran has announced that this will be extended until February 28th in order to recognise the “exceptional mobilisation” of health workers during the current wave of Covid cases.