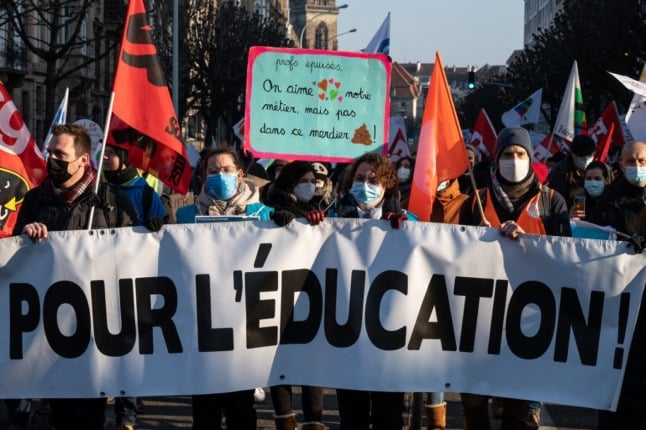 Teachers take to the streets for the first strike in protest at Covid measures in French schools. Photo: Patrick Herzog / AFP

France’s teachers are set to strike for a second time on Thursday, as their dispute with the government over Covid health measures continues.

Why are teachers in France going on strike?

They are protesting against ever-changing Covid-19 health measures in schools, which they say have been inconsistent since the start of the new term and unsafe.

The unions want the government to provide facemasks for staff, including the more protective FFP2 masks, and CO2 monitors to check if classrooms are sufficiently ventilated.

Some unions are calling for a return to the old situation of a single positive Covid test leading to the closure of classes, and close contact testing among families, as well as a policy of systematic weekly saliva tests.

“The Minister boasts of keeping schools open to dress up his political choice to make schools a daycare centre, to allow parents to go to work, in defiance of the health of staff, children and their families,” the union said.

Last week, the teachers had the support of parents’ group Fédération des conseils de parents d’élèves (FCPE), which called for a ‘day of protest’ in which parents kept their children off school. That support has been maintained for this week’s walkout.

They did. Even before last week’s strike took place, Prime Minister Jean Castex announced a simplification of health measures after initial plans led to long queues outside pharmacies and labs, after children required a lab-level PCR or antigen test after a case was detected in their class, before taking two more home tests on the second and fourth day.

After last week’s strike, the government announced that schools will receive 5 million FFP2 masks and that it would recruit thousands of substitute teachers to help deal with the pandemic.

What level of support are teachers likely to have?

It looks pretty strong, multiple teaching unions are involved and the FCPE parents association is backing this second walkout.

The education ministry said almost 40 percent of primary school teachers walked out last week, but the union Snuipp put the figure at 75 percent with half of all primary schools closed for the day.

So, there’ll be marches and disruption to deal with on top of everything else?

Not everywhere. The unions’ plans for a big march in Paris were dealt a blow when the police decided it wouldn’t be allowed.

The unions FSU, CGT Educ’action, FO and SUD Education, as well as the FCPE, and the high school student movements FIDL, MNL and La Voix lycéenne had called for “a continuation of the mobilisation” after January 13th, committing “to a new day of action on Thursday, including by strike”.

The prefecture insisted that the paperwork required to hold a march on January 20th, had come in too late for it to allow the march to go ahead.

The unions weren’t impressed with that decision. “Not content with remaining deaf to the anger and demands of National Education staff, the government, through its representative, denies them the right to express it by demonstrating in Paris” the CGT said in a press release.

It went on to say that the union considers this decision “unacceptable” and “demands that the constitutional right to demonstrate be respected”.

The FSU, meanwhile, said: “After a successful demonstration on January 13th, the police prefecture banned the expression of staff demands following the announcements made by the Prime Minister (…) The FSU strongly protests and demands that the ban on demonstrations be lifted.” also asked this union in another press release.

Marches, however, will take place in other towns and cities.

And how, exactly, does the Spanish holiday island of Ibiza fit into all this?

Education Minister Jean-Michel Blanquer announced these new measures to keep schools open in a newspaper interview just days before the start of the new school term.

Two weeks later, it turned out that he gave the interview while on holiday in Ibiza, and it later emerged that he actually got married to his partner – a French journalist – on the island.

There is no suggestion that he broke health rules – holidays are allowed – but still his actions did not impress teachers much. Or unions, or political opponents who all united in condemnation. Some MPs on the left called for the Minister’s resignation.

“The symbolism is terrible,” Sophie Vénétitay, the general secretary of the Snes-FSU union, said on franceinfo. “Everyone has the right to take a vacation, but we were on the eve of a very special return to school.”

SNUipp-FSU spokesperson Guislaine David added: “There is a gap between what Ibiza represents and what colleagues were experiencing on a daily basis on the eve of the start of the school year. (…) It will inevitably widen the gap that already existed between the minister and teachers.”

Presidential candidate Yannick Jadot told France 2’s Four Truths programme: “He has the right to vacation. He also has the right to work to ensure that this return to school is not an absolute mess.”

“It’s the feeling of the return of ‘bling bling’ at a time when everyone is asked to tighten their belts,” Olivier Faure, of Party Socialist said on franceinfo, referring to the years of the Sarkozy reign, when the president was widely felt to be out of touch with the concerns of ordinary people.

Is anyone backing him?

We’re not in UK prime minister Boris Johnson’s ‘Partygate’ territory quite yet. Blanquer is under pressure over Ibizagate – yes, it’s got the dreaded ‘-gate’ suffix – but, publicly, the government is four-square behind him.

“You have to be easily repatriable to Paris, permanently reachable, I have no reason to think that was not the case,” government spokesman Gabriel Attal said on CNews, outlining the rules for government ministers taking holidays.

He argued that the health protocol had been presented late to take into account the recommendations of the High Council for Public Health, which were issued in the afternoon of December 31st.

“The Education Minister has been extremely mobilised and committed for four-and-a-half years. [This is] a pre-presidential campaign controversy,” Elisabeth Moreno, Minister Delegate in charge of Equality between women and men said dismissively on franceinfo.

And behind the scenes?

That’s, arguably, a slightly different story. Le Monde has reported that Blanquer had been advised against heading to Ibiza by representatives of the Prime Minister’s office as well as his own.

And, just two days into the new school term, President Emmanuel Macron admitted in an interview Le Parisien – a comment that is widely regarded as a scarcely veiled criticism: “We need more anticipation and more time for the authorities to communicate with the schools.”

It seems Blanquer will be treading on educational eggshells for a while.

A fresh wave of strikes at the RATP – the company responsible for operating public transport in Paris – will result in widespread disruption on Monday.

In a notice to passengers published on Sunday evening, the RATP said that some bus lines would be closed completely. Only two out of three buses will run on the lines that remain open during the daytime. The night bus service will run as normal.

On average, three out of five trams will run on Monday.

Normal traffic is expected on tramlines T5, T6 and T7.

On T1, only one out of two trams will run, with a ten minute interval between each shuttle. The line will only run between Gare de Noisy and Gare de Gennevilliers. Operation times are limited to 06:00-11:00 and 15h:00-20:00.

The T8 line is by far the most disrupted with only one in every four trams running. The line will only operate between Saint-Denis – Porte de Paris et Epinay–Orgemont. Trams will run between 06:00-10:00 and 16:00-20:00.

Further strike action is expected on Wednesday, although RATP are yet to disclose the scale of that later disruption.

What is behind the strikes?

Bus and tram workers are striking over proposed plans to open up RATP services to subsidiary companies, with changes to working conditions.

As of January 1st, 2025, all bus will be transferred to the subsidiaries or competing companies who won bids issued by the regional transport authority, Île-de-France Mobilités.

RATP plans to put the new working conditions into effect – those that would have been set to apply in 2025 – as early as July. These changes would impact at least 18,000 drivers.

Specifically, drivers will fall under the “territorial social framework” (CST), the minimum legal framework for working hours, which will require 35 hours of work per week (and 37 hours per week for select drivers). Currently, the RATP’s rules regarding working hours are more advantageous, with the average driver working 33 hours a week (excluding overtime and travel time).

Union management has been fighting against these proposed changes for over a year, having already held a strike March 25th, which impacted over 30 percent of bus lines in the Paris region.

Now, they calling for mobilisation to “defend their working conditions” again.