The British girl was on a beginner ‘blue’ slope called “Les Serpentines” in a skiing class with several other children when she was hit by a skier who had not managed to control his speed, according to French media reports.

The eastern region of Bonneville’s public prosecutor’s office where Flaine is located said, “The child was in a line behind the group and was about to make a right turn when she was very violently hit by the skier arriving at high speed who tried in vain to avoid her,” reported media agency France Bleu.

She died while being transported by helicopter and did not survive her injuries.

The girl was skiing with her English family who live in Geneva and have a second home in the area, in Les Carroz.

The skier, a man from Haut-Savoie in his forties, was reportedly extremely shocked and was taken into custody by the police, who have since opened an investigation for manslaughter, according to French journal Le Dauphiné.

As the snow returns to French mountains, many have been wondering what the situation is for French ski resorts, some of which had to close due to unseasonably high temperatures and a lack of adequate snow cover over the New Year.

The closures primarily affected lower altitude ski resorts, namely those located in the Pyrenees and Jura mountains. However, several resorts in the Alps closed temporarily too.

Here is what the landscape for French ski resorts looked like as of January 20th:

Last week, snow began to fall again across much of the southern French Alps, so much so that Alpes-de-Haute-Provence was placed on a “yellow” alert for avalanches.

READ MORE: What can I do if I’ve booked a French skiing holiday and there’s no snow?

According to Science et Vie, lower altitude ski areas, such as the Vosges and Jura, collected between 10 and 25 cm of new snow at altitudes above 1,400 metres in recent days. The southern Alps and Pyrenees mountains received over 20 cm of snowfall at altitudes above 2,000 metres too.

This past week’s winter storms were accompanied by sudden drops in temperature, dropping as low as almost “-20C at high altitude” last week.

As of Friday, significant parts of the country were on ‘yellow’ warning for snow and icy conditions, low temperatures, and avalanches in some mountainous regions. 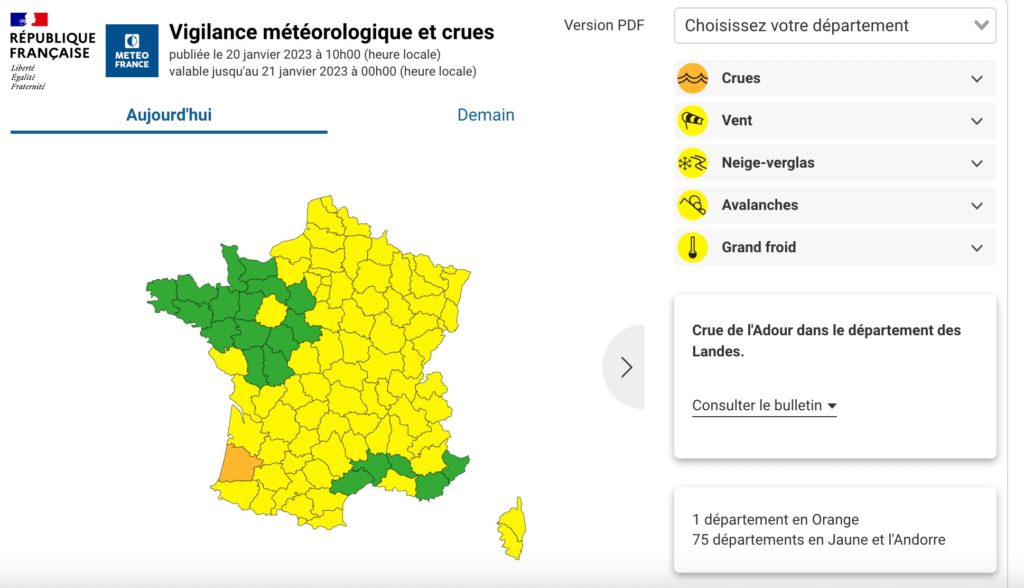 A screenshot from Meteo France on January 20th (Credit: The Local)

On Thursday, Meteo France recorded temperatures below -19C at Val d’Isère, a ski resort in the French Alps.

After winter weather brought a drop in temperatures to much of the Alps on Monday, some resorts took to social media to celebrate the fresh snowfall.

In Haute-Savoie, which saw almost half of its ski areas closed due to insufficient snowfall in early January, several resorts have begun announcing reopening plans. Some have preferred to reopen gradually, in an effort to give the ski area time to accumulate snow.

One such resort is the Semnoz ski area, which announced it would be reopening on January 18th. You can find more information on their website HERE. While some resorts have begun reopening, some have kept a certain runs and ski lifts closed.

As for Les Arcs, a ski resort located in Savoie, 98 of the 122 slopes were open on Friday. A few ski lifts were also still closed, but the majority were running again (49 of the 53).

Other large alpine resorts, such as Val Thorens, had reopened as of Tuesday, with just one slope remaining closed as of Friday.

In the French Pyrenees, at least a third of the ski resorts had to close in early January, and many have also announced plans to reopen in recent days. You can find a comprehensive map showing which resorts are open, partially open, and closed in the Pyrenees mountains on the Franceinfo website HERE.

One such resort was Ax 3 Domaines, located in Ariège, which closed after only being operational for the first three weeks of the season. The resort said it would be gradually reopening from January 17th.

Two other resorts in the Haute-Garonne announced they would be reopening this week: Luchon-Superbagnères and Mourtis. The former began reopening to the public on January 18th.

Similar to the Alps, several resorts have announced plans for partial reopening. One example is the Monts d’Olmes resort, which said it would begin by first opening its eight beginner slopes.

As for the other Pyrenees ski resorts that were partially open, like those of the N’Py group, such as Peyragudes, Piau, Grand Tourmalet, Luz, Cauterets, they were preparing to fully reopen during the weekend of January 21st and 22nd.

Where should I prioritise to ensure slopes are open and have enough snow cover?

According to French daily Le Figaro, which published its guide for where to ski in 2023, certain resorts stood out for typically having sufficient snowfall for skiing. They based these results on average snowfall since 2021 and altitude, and recommended Val-Thorens and Tignes in the Alps, as well as Cauterets in the Pyrenees.