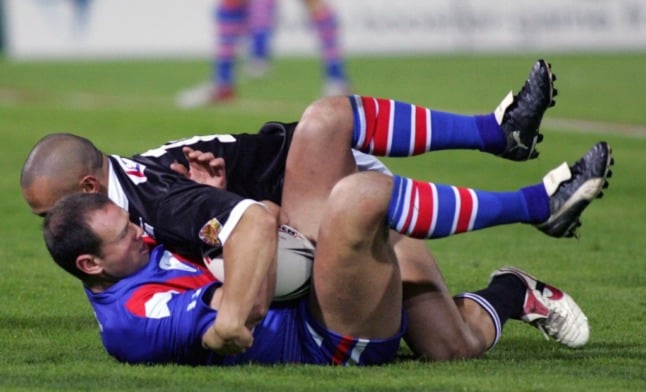 France is to be the sole host of the Rugby League World Cup for the third time stepping in for the 2025 edition after the United States and Canada pulled out due to financial reasons.

The 2025 championship will be a genuine festival of the sport with the men, women, wheelchairs and youth versions taking place over five weeks, the French Rugby League federation said in a statement.

The matches will take place in 40 towns across the country.

“France-2025 will be a tournament for the people,” the federation said.

“The average price of a ticket will be less than 30 euros and therefore will permit all levels of society to be part of this party.”

However, two franchises Catalan Dragons and Toulouse Olympique compete in the Super League with the Perpignan-based Dragons reaching the Grand Final last term.

The Dragons have established themselves as a top half side with the added allure of attracting some of the highest attendances.

The 2021 World Cup being hosted by England had to be postponed to this year due to the Covid-19 pandemic and will run from October 15 to November 19.

Laurent Nunez, 58, took over from Didier Lallement who during his three-year stint was often criticised for heavy-handed police action, most recently at a Liverpool-Real Madrid game on May 28.

Faced with the build-up of frustrated crowds around the Stade de France, police used tear gas and pepper spray to move them back, also harming many children as well as disabled fans in wheelchairs.

Officials say Lallemant’s departure was not linked to the football fiasco, but Interior Minister Gerald Darmanin left no doubt that he expects Nunez to help fix Paris’s tarnished image as the capital prepares to host the summer Olympics in 2024.

“You will be the police chief in charge of the Olympic Games, and the entire police service must be focused on that task,” he said at Thursday’s handover ceremony.

Paris will also host the Rugby World Cup next year.

Among sources of friction between Lallemant and city hall, as well as President Emmanuel Macron, was his criticism of plans to hold part of the Olympic opening ceremony on the river Seine, which he and other police officials believed to be an unnecessary security risk.

Lallemant, who was unapologetic about his law-and-order approach, was also in open conflict with leftist parties over numerous incidents of police violence, including against Yellow Vest protesters.

“Didier Lallemant is leaving, good riddance,” tweeted Mathilde Panot, deputy for the leftwing LFI party. “We won’t forget the Yellow Vests who lost their eyes, or had their hands torn off, and the other injured demonstrators.”

Lallemant, 65, said in a farewell letter to staff that he was “proud of duty done”, but he also admitted “carrying the wound of the Stade the France failure”.