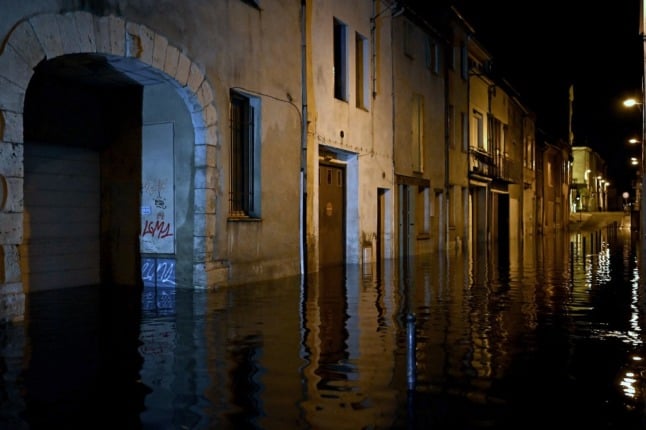 Heavy rainfall has seen much of southwest France experiencing flooding over the last couple of days.

In Haute-Garonne and Ariège, the equivalent of one month of rainfall fell in 48 hours.

The effects appear to have been worst felt in the Haute-Garrone département, where the Garonne river burst its banks.

By Tuesday morning it remained 4m 31cm above its normal level in Toulouse – something the city hasn’t experienced in two decades according to France Bleu.

Local media report that on Monday evening, a woman in her 70s was found drowned in a ditch close to her house in Merville, to the west of Toulouse.

A number of communes around the surrounding city saw school closures and school buses cancelled on Tuesday.

By 9am, only half of regional trains were running on the line between Toulouse and Latour-de-Carol. At least one metro station in Toulouse itself was closed due to flooding. A number of roads around Toulouse and the town of Lourdes were completely flooded and inaccessible.

On Monday night, hundreds of people were evacuated from student accommodation on the Toulousian Île du Ramier and many were forced to sleep in a gymnasium.

A football match between Toulouse and Nancy that evening was postponed.

Fortunately, parts of the Garonne river are slowly returning to normal levels. Marc Zarrouati, an official working for the Prefect of Haute-Garonne told French media that “the worst is behind us”.

The southwestern départements of Gironde, Landes, Pyrénées Atlantiques, Hautes Pyrénées, Gers, Haute-Garonne, Lot-et-Garonne and Tarn-et-Garonne still remain on orange alert for floods. And météo France has urged people to be “very vigilant” around waterways near Toulouse, and areas directly south of Bordeaux. The orange lines on this map represent waterways where the public are urged to be “very vigilant”. Source: Météo France.

Outside of Haute-Garonne, a number of other parts of southern France saw widespread disruption due to flooding.

The port of Saint-Cyprien, in the Pyrénées Orientales département, remained entirely submerged in water by Tuesday morning.

In the Landes département, firefighters, members of the municipal council and volunteers of the Red Cross had to help residents evacuate on Monday.

Some parts of the Garonne river bassin, as well as the Adour bassin and Lannemezan river may not see an end to surging water rises until Wednesday.

People living in Charente-Maritime, Charente, Dordogne, Ariège, Aude and Hérault are warned to remain “attentive” to further possible flooding. Residents of Ariège, Andorre and the Pyrénées Orientales are also urged to remain attentive to a potential avalanche risk.