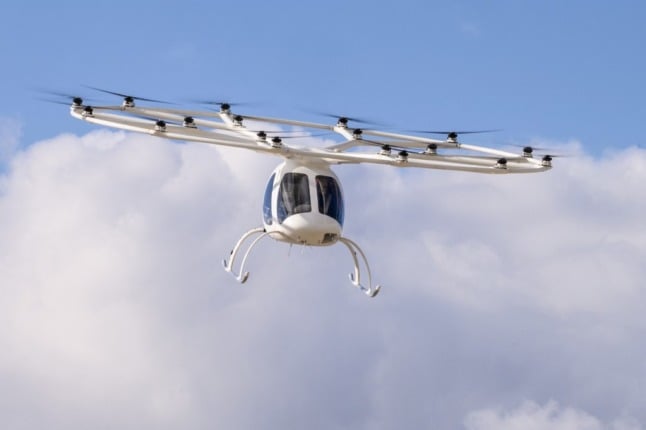 A VoloCopter prototype flies through the sky. The Parisian suburb of Pontoise will begin a trial of flying taxis in 2022. (Photo by Anthony WALLACE / AFP)

Line 4 of the Paris Metro will stretch 1.8km further south with two new stations, terminating in Bagneux in the southern suburbs. The Barbara (between Montrouge and Bagneux) and Bagneux stations will open on January 13th. As a result of this extension, 37,000 extra people are expected to use the Metro each day. Trains running on this line will be progressively automated from the summer.

Navigo users to be reimbursed for late trains

SNCF and RATP have said they will begin reimbursing Navigo pass holders for repeatedly late RER A and RER B trains. If less than 80 percent of rail services are on time over a period of several months, users will receive compensation for anywhere between half a month of subscription fees to one and a half months of conscription fees. Those who frequently use the RER B are most likely to benefit from compensation. Reimbursement will not be automatic as in 2021 – rail users will have to apply via a specially created website.

Many Metro stations have already begun phasing out the old 10-pack metro tickets carnets. In March, almost all stations will have scrapped this purchase option altogether in an effort to push people towards purchasing rechargeable Navigo Easy cards or use the IDF Mobilities app instead. Cardboard tickets won’t disappear completely – it will still be possible to buy single tickets.

RATP, Aéroports de Paris and a company called Volocopter are striving to launch a flying taxi service, although we’re a long way off hailing a flying cab just yet. Prototypes are set to be trialled during the Spring in Pontoise, to the northwest of Paris. The vehicles are a sort of hybrid between drone and helicopter and will be capable of carrying up to four passengers at once. If the trials are successful, the company says that the aim is to have the service fully operational by 2024 – journeys would cost in the region of €100.

The cost of most journeys on public transport in Ile-de-France will be limited to €5, or €4 per journey for people buying a carnet.

The move will be subsidised by regional authorities to the tune of some €60 million per year. It was a campaign promise of Valérie Pécresse, president of the Ile-de-France Regional Council and now presidential candidate.

Line 12 of the Paris Metro will be extended northward, with two new stations – Aimé-Césaire and Mairie-d’Aubervilliers – opening in May. Residents of the northern suburbs have been waiting for this for nearly 20 years, but various problems, most recently including the Covid pandemic, delayed the project significantly.

City authorities in Paris have promised to protect 60km of cycle lanes known as coronapistes, which were initially meant to be temporary solutions to reduce the saturation of public transport during the pandemic. In the Summer, this network will be expanded eastwards towards Place de la Bastille. The city has promised to construct a 650km network of cycle lanes by 2025.

After 5 years of construction, the T-13 tramway will finally open up in Yvelines, connecting Saint-Cyr-l’École in the south to Saint-Germain-en-Laye in the north. The line will link through RER C and RER A without users having to travel through Paris. Some 21,000 daily passengers are expected to use the service every day.

At least four months of repair and maintenance work will begin on August 23rd in the RER C station, Saint-Michel-Notre-Dame, meaning that this stop will be temporarily out of service. The total cost of the work is estimated at €32 million. The Saint-Michel stop of the RER B and Line 4 will however remain operational.

From September 1st, parking will no longer be free for motorised two-wheeled vehicles on Paris. Drivers will have to pay €2-3 per hour to park their motorbikes/motorcycles, for a maximum of six hours at a time. City authorities have promised to put in place a monthly pass for non-resident bikers, which will allow them to park at cheaper rates at designated parking spots.

End of the year

City authorities are discussing the creation of a limited traffic zone in the centre of Paris, promising to put one in place in the second half of 2022. The aim is to reduce traffic in the four central arrondissements but it is unclear who will have the right to continue driving there. It looks likely that residents, taxis and business owners will be able to continue using these roads but that visitors and private chauffeurs will not.

The next ‘mass mobilisation’ in the ongoing battle against pension reform is scheduled for Tuesday, February 7th, and will be followed by another one on Saturday, February 11th.

Tuesday’s mobilisation is supported by all eight French trades union federations, which means that support is likely to be high and disruption severe on certain services.

It will come as French lawmakers debate the bill in the Assemblé Nationale.

Workers in essential services such as transport must declare their intention to strike 48 hours in advance, allowing transport operators to produce strike timetables, which are usually released 24 hours in advance.

We will update this story as new information is released.

READ MORE: ANALYSIS: Who is winning the battle over French pension reform?

During the day of action on January 31st, 36.5 percent of railway workers went on strike, compared to 46 percent on January 19th.

In addition to Tuesday’s strike action, two of the above unions, CGT and Sud Rail, have also called on workers to strike on February 8th. However, as of February 2nd, the other two primary unions had not made any calls to take part in Wednesday’s action.

Intercity and TER trains operated by the SNCF will likely see services disrupted on Tuesday with many cancellations. International trains including the Eurostar could also be affected.

Traffic was severely disrupted on the most recent day of strike action, January 31st, on certain RER lines, with some lines like the RER C running an average of 1 train out of 10. As for the Paris Metro system, several lines only ran during peak hours and many stations across the city were closed. Many buses continued running, though with delays to usual operating times.

Other cities including Marseille and Lyon will likely see a repeat of severely disrupted bus, tram and Metro services.

In Lyon, on January 31st, public transport services were strongly impacted by strike action, and one metro line did not run at all throughout the day.

While it is not yet clear what level of disruption to expect in air travel, the leading civil aviation union, USACcgt, has called on “all DGAC (French civil aviation authority) and ENAC (National school of civil aviation) staff to go on strike en masse and take part in demonstrations” on February 7th, according to reporting by Le Parisien.

During the two previous mobilisations, approximately 20 percent of flights operating out of Paris-Orly airport were cancelled, but other airports were not affected.

Port and dock workers walked on January 31st. It is not yet clear if they will join actions on February 7th, but typically strikes in this sector impact commercial ports rather than ferry ports.

Tuesday’s strike will take place during the first round of winter holidays – so students in the Zone A (Besançon, Bordeaux, Clermont-Ferrand, Dijon, Grenoble, Limoges, Lyon, Poitiers) will already be off school.

You can find out more information about France’s school zones here.

Nevertheless – one of the major unions representing teachers, Snuipp-FSU said in a statement that they hope to see an “amplification” of previous walkouts, as they called on teachers to walk out on February 7th.

In addition to industrial action by teachers, several student unions, like the “National Student Movement” (MNL), representing high school students have made an effort to mobilise French youth across the nation, with some blocking the entrance to their high schools on strike days. According to the Journal des Femmes, the MNL has called on high schoolers across the country to walk out again on the 7th.

BFMTV reported on January 31st that a walkout was scheduled for seasonal workers for approximately one hour and thirty minutes on Tuesday, February 7th. This means that in some resorts, ski lifts and stores could be closed.

READ MORE: What to expect from strike action in France during the February school holidays

The two unions that represent more than 90 percent of workers in ski resorts have also called an ‘unlimited’ strike which began on January 31st. This means further actions could come later in the month as well.

French refinery workers have threatened to strike for a 72-hour period beginning on February 6th. Union representative, Eric Sellini, told AFP that these actions could result in a “lower throughput” for petrol and a “stoppage of shipments.”

This could mean that there may be shortages of petrol and diesel at some filling stations if the blockades are successful in stopping supplies leaving the refineries.

The mobilisation on January 31st saw a significant number of refinery workers walk out – between 75 to 100 percent at some refinery and oil depots, according to the union CGT.

Workers in the energy sector (electricity and gas), primarily represented by the union FNME-CGT, have announced plans to strike from February 6th through 8th.

The day of action on January 31st had 40.3 percent of employees at EDF (France’s national energy provider) walk out, in comparison to 44.5 percent on January 19th.

Some workers in this sector have taken what they call “Robin Hood” actions to “distribute free electricity” to hospitals, schools and low-income housing areas.

On January 31st, striking workers brought about significant load reductions in some power plants across the country – approximately 3,000 MW according to La Depeche. However, these reductions in power reportedly did not lead to any power cuts on the 31st.

In Lyon, the route for the demonstration has already been decided, according to Lyon Capitale. It will begin at 12pm in front of the Manufacture des Tabacs. The procession will move toward the Place Bellecour.

Unions are hoping for a similar turnout on February 7th.

The above information relates to February 7th only. Unions have also called for more walkouts on February 11th.

Other unions have also declared ‘unlimited’ strikes, so there could be disruptions on these services on other days – these include ski lift operators and truck drivers.