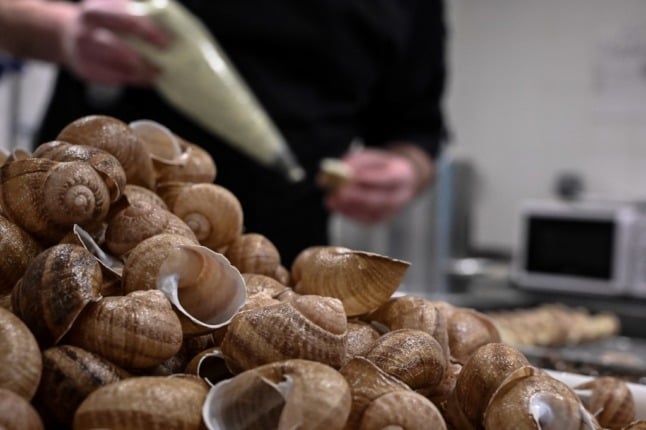 In truth most French people have never actually eaten snails, known as escargots. They are generally seen as a food of the elite – or a novelty for tourists, so how did they get to be emblematic of French cuisine?

France remains world’s number one consumer of snails, going through about 30,000 tonnes every year. It only produces between 5 and 10 percent of these, however, the rest are imported, mostly from Eastern Europe and North Africa.

According to a parliamentary report, the three main species consumed here are the garden snail (Helix aspersa), the land snail (helix lucorum) and the prized Bourgogne snail (helix pomatia).

The shelled creatures are typically removed from their shells, dried, then cooked in a broth, placed back into their shells and smeared in garlic butter before being served up.

Hunter gatherers in a land that was yet to be named France were eating snails as far back as the 8,000 years ago. By this point in pre-history, humans had learned how to make fire – which is just as well because eating snails raw can lead to serious food poisoning.

There is also evidence that the ancient Greeks and after then, the ancient Romans were eating snails not long after the death of Jesus, as seen in the writings of Pliny the Elder.

At this point in time, there was nothing specifically French about snail consumption. In fact, people in many countries in Europe, Africa and South Asia still eat snails today. These creatures are high in protein and low in fat (until you smother them in butter).

So when did eating snails become French?

The turning point in France came in 1814 thanks to the a man named Charles Maurice de Talleyrand-Périgord, who would go on to become the first ever Prime Minister of France.

At the time, Talleyrand was serving as the country’s Foreign Minister, under King Louis XVIII.

Tsar Alexander of Russia was in France on a state visit and Talleyrand was eager to impress. He asked his chef, a man named Marie-Antoine Carême, to prepare a dish that the Tsar would never have tried before.

Carême opted for snails with garlic, parsley and butter – which at the time was a local delicacy in Burgundy, the region that he hailed from.

The Tsar was allegedly so impressed by the dish that he regularly requested further servings throughout the rest of his stay and even on his return to Russia. For much of his reign, Alexandre I remained closely allied with France – although to be fair, he also frequently changed his mind and went to war with the country.

In any case, the Tsar’s visit marked a watershed moment for French snail consumption – the dish became emblematic of culinary and diplomatic success and its popularity soared well into the 20th century.

In 2017, the Bourgogne snail became a protected species. It’s cultivation, which happens mostly in the East of France, is carefully regulated.