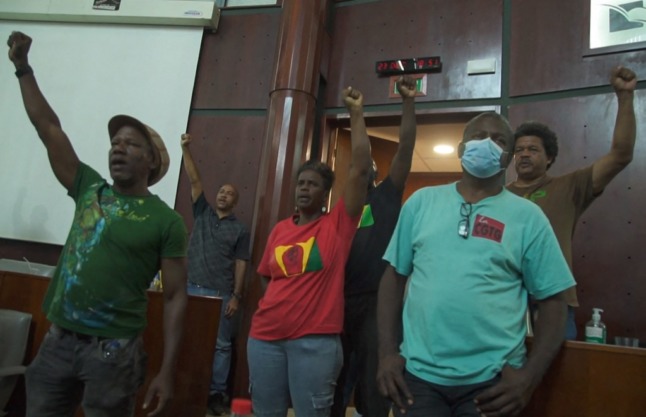 This grab taken from AFP TV footage on December 24th, 2021 shows Elie Domota (back, R), union leader and spokesman of Liyannaj Kont Pwofitasyon (or LKP), Maite Hubert M'toumo (C), leader of the UGTG, and protestors breaking into the Regional Council in Basse-Terre, on the French Caribbean island of Guadeloupe, at the end of a plenary session on December 23rd.  Benedicte JOURDIER / AFP

There have been tensions in Guadeloupe and the neighbouring island French territory of Martinique during the last weeks over rules including obligatory Covid vaccinations for healthworkers that have fed into long-standing local grievances.

Protesters first entered the debating chamber of the regional council while it was meeting on Thursday with several staying the night and deciding to continue their action into Friday. Councillors were able to leave peacefully.

They want to negotiate with Paris over the crisis, but officials have so far indicated that there can be no talks as long as such actions are carried out. The protesters notably want all sanctions halted against healthworkers who have refused the Covid jab.

With Christmas looming the protesters began to leave the chamber at 1:00 pm (1700 GMT) but would meet again Monday to prepare a new action next week, Elie Domota, a union leader and chief of the LKP association told AFP.

Raphael Cece, of the newspaper Rebelle, added: “We are not against the vaccine, but we are fighting against this injustice, the sanctions, the mandatory vaccines for healthworkers.”

France’s Overseas Territories Minister Sebastien Lecornu lashed out at their action, tweeting: “No demand justifies hindering the smooth running of an assembly of elected officials in the middle of a plenary session.”

Covid vaccination rates in France’s Caribbean territories are far lower than those in mainland France, and there are concerns that the new wave created by the fast-spreading Omicron variant could spark serious problems.

READ ALSO: France fears over 100,000 daily Covid cases by the end of the year

The crisis brought the island to a standstill last month when protesters set up barricades around major roads.

Healthworkers who did not want to be vaccinated will be suspended from December 31st but can be helped to transition into other work.

France’s Caribbean territories, remnants of the colonial era, are seen as luxury holiday destinations by people in mainland France. But residents there believe they have long suffered from neglect by Paris, which has resulted in living standards well below the French average.