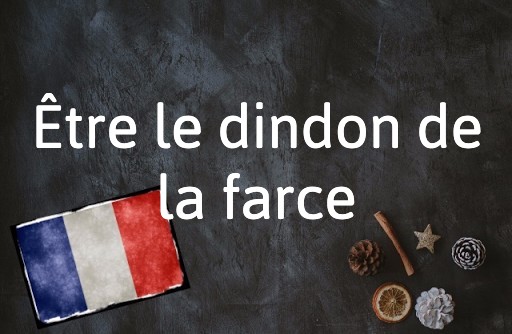 Why do I need to know être le dindon de la farce?

Because if you hear someone use this expression around the table, they are not talking about turkey.

If you are the dindon de la farce, it means you are the butt of the joke, or that you have been duped.

The origins of the expression are a little hazy but there seems to be some consensus that it came from an 18th century funfair attracted called Le Ballet des Dindons.

The act consisted on placing live turkeys on a sheet of metal, caged-in, with nowhere to escape. The metal sheet would be progressively heated from beneath, causing the birds to hop and shuffle manically in pain. This fowl-torture was considered a hilarious piece of entertainment to people at the time.

So to be the dindon de la farce is to be the poor tortured animal surrounded by people laughing at you.

Intriguingly, Victor Hugo once wrote: “The turkey is a ridiculous animal”.

And Michèle Bernier, a French actress, once said: “When god created the turkey, he was drunk”.

These birds do not get a lot of love in France. At Christmas they are often eaten but they’re not a nailed-on Christmas favourite as in some countries and duck, goose and guinea fowl are also popular as festive roasts.

Traité de dindon – To be taken as a joke