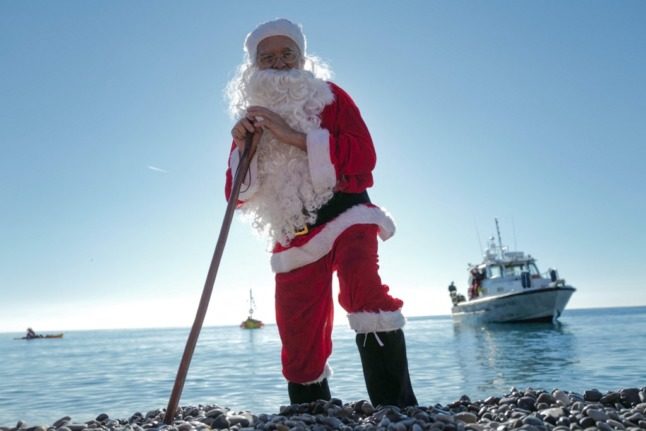 A man dressed as Santa Claus poses on the beach during the traditional Christmas swim in the French city of Nice. Here's what you need to know for the week ahead. (Photo by Valery HACHE / AFP)

Hospital workers in France will see overtime pay doubled – although it is unclear how long this rule will remain in place.

“We owe them a lot,” said Prime Minister Jean Castex. “We owe them our recognition for their commitment during the holidays.”

The European Medicines Agency (EMA) is expected to announce whether or not the Novavax Covid vaccine is approved for use in Europe. On Friday, the Novavax vaccine became the first protein-based vaccine to be approved by the World Health Organisation.

Even if the EMA gives its approval, it could be some time before this vaccine is rolled out across France. The French government has repeatedly insisted that France has sufficient stocks of existing vaccines like Moderna and Pfizer.

The airport of Clermont-Ferrand Auvergne has announced that is cancelling all flights to and from Paris from December 20th until the Spring. Airport officials blamed the pandemic for the decision.

Médecins Sans Frontières (Doctors without borders) is a French NGO that has been providing medical assistance to people in disaster zones, typically in the context of armed conflict, for half a century. It currently operates in more than 70 countries around the world and employs some 41,000 people.

The organisation has launched a communications campaign to mark its 50 year anniversary in the hope of raising more funds. 99 percent of its financing comes from private donors.

La Vie Parisienne was a comedy opera first staged in 1866. It poked fun at high society and was inspired by wild nights out in the French capital. “From the bravos and cries of laughter, this parody of Parisian life could not have gone better,” wrote a critic from the Le Figaro newspaper at the time.

A modern adaptation of this production will be staged at Paris’ Théâtre des Champs-Elysées until January 9th. You can buy tickets HERE.

The Haute Autorité de la Santé (la HAS) will issue guidelines at the beginning of the week as to whether or not children aged between 5-11 should get vaccinated against Covid-19. Currently, at-risk children of this age (those who are immunodeficient or have other co-morbidities such as obesity) are already eligible for vaccination.

If they are in favour, vaccinations of all 5-11 year-olds can begin from Wednesday, December 22nd, announced health minister Olivier Véran.

Season two of Emily in Paris is released

It is the series you love to hate. And it’s back. The first season of Emily in Paris was blasted by critics as an exceptionally vapid take on life in France, full of saccharine cliché. Yet viewing figures were through the roof. You will be able to stream season 2 on Netflix.

The perfect moment to get tested before Christmas

The French government has recommended getting tested for Covid before meeting up with friends and family for Christmas celebrations. Read the latest guidelines HERE.

If you plan on taking the train to visit friends or family, you will need to wear a mask and carry a health pass. Also bear in mind that public transport services will likely be extraordinarily busy and there will be heavy traffic on the roads.

Merry Christmas! Unfortunately the Christmas Day falls on the weekend this year and in France, December 24th is not considered a bank holiday – which means no extra day off.

The government has recommended that people avoid large gatherings over the festive period.

“The less of us there are [at gatherings], the less we are taking risks,” said Castex on Friday.

Bear in mind that further Covid restrictions could be announced during the week. We will be sure to keep you updated.