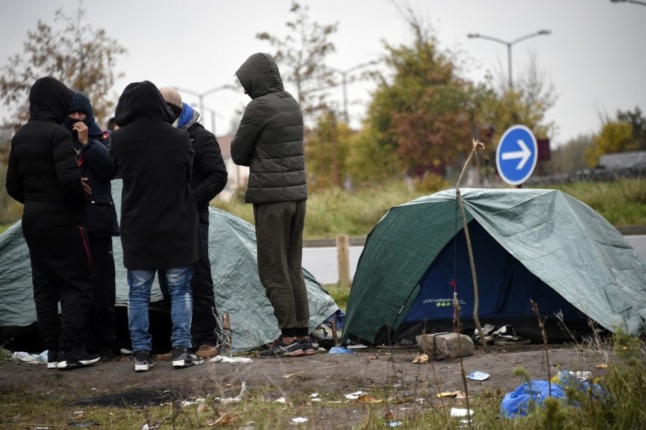 The video, recorded in the northern city of Calais which for several years has been a hub for migrants seeking to reach Britain, shows troops deployed in the Sentinelle domestic security operation drifting and performing skidding circles in their vehicle in a field.

There are dozens of tents of migrants in the background and the ‘doughnuts’ manoeuvres appear to be performed by the troops in a four wheel drive in a bid to impress the onlooking migrants.

“An unacceptable scene. An investigation has been launched immediately,” the French armed forces said in a tweet.

Armed forces spokesman Hervé Grandjean added: “This behaviour is totally at odds with the values of our armed forces.”

The showing-off had ended in apparent humiliation for the troops in the vehicle, which ended up stuck in the mud as it sought to turn another sharp corner. Social media users said other troops were called out to dig it out with spades.

A full statement from the French defence ministry confirmed that the incident had taken place earlier Sunday involving troops carrying out a patrol in Calais.

“One of the soldiers, the driver, behaved completely inappropriately by using dangerous manoeuvres, which resulted in the vehicle getting stuck,” it said.

The statement said sanctions will be decided once responsibility has been apportioned.

The images are a major embarrassment for the French army at a hugely sensitive moment after 27 migrants drowned last month when their boat sank in the Channel last month while trying to reach Britain.

The tragedy, the biggest such loss of life since northern France became a hub for migrants seeking to cross the Channel, added to growing post-Brexit tensions between Britain and France over how to handle the situation.

London accuses Paris of not doing enough to stop the migrants crossing while France alleges that the migrants want to cross because of more relaxed unregulated labour practices in Britain, especially in London.

NGOs have also long accused France of not doing enough to ensure the wellbeing of migrants on the northern coast, many of whom live in squalid conditions.

Troops have been deployed across France in operation Sentinelle since 2015 to ensure the safety of the public after deadly attacks claimed by radical Islamists.