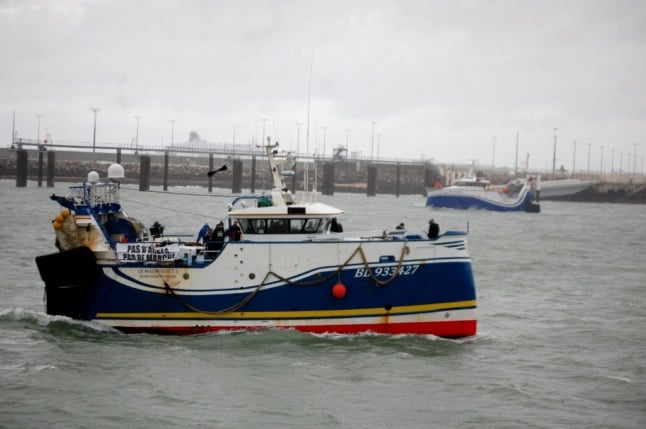 Fishing boats block the entrance to the port of Calais in November. Today is the deadline for the British government to issue post-Brexit fishing license to French fishermen. (Photo by Bernard BARRON / AFP)

The UK government on Thursday said it was not working to a Friday deadline given to it last month by the European Union to resolve a row with France over post-Brexit fishing rights.

“We’ve never set a deadline. I recognise they (the EU) themselves have set one but it’s not one we’re working to,” Prime Minister Boris Johnson’s spokesman told reporters.

France is angry that Britain and the Channel Islands of Jersey and Guernsey have not issued some French boats licences  o fish in their waters after Brexit.

French President Emmanuel Macron on Thursday accused UK Prime Minister Boris Johnson’s government of failing to keep its word on Brexit, but said he was willing to re-engage in good faith.

“The problem with the British government is that it does not do what it says,” Macron told a news conference, adding however that there “had been progress” in the last weeks and that France wanted full cooperation with London.

Under a deal agreed by London and Brussels late last year, European fishing vessels can continue to ply UK waters if they apply for new licences and can prove they operated there in the past.

At a previous meeting between the pair on November 24, Sinkevicius gave Britain a December 10 deadline to resolve the issue of licences sought by French fishermen, who complain that post-Brexit requirements are too onerous.

Johnson’s spokesman said that Eustice and Sinkevicius had spoken on Wednesday evening about progress so far on the licensing issues.

But he said he was “not aware of certainly any communication we’ve had from the French government, certainly not to the Prime Minister”.

“There’s a technical process still ongoing based on evidence rather than set deadlines,” the spokesman added, insisting talks so far “have been constructive”.

France is demanding more fishing licences from London and the Channel Island of Jersey as part of the agreement which was signed on Christmas Eve last year.

European fishermen can continue to work in British waters as long as they can prove that they used to fish there.

In May, as tensions over access to the self-governing British crown dependencies in the Channel boiled over, French trawlers briefly encircled Jersey’s main port.

In November, French fishermen on Friday blocked freight traffic from entering the Channel Tunnel to England, in a day of action to protest at the post-Brexit fishing rights granted by Britain.

Guernsey’s authorities had so far renewed licences on an interim, month-to-month, basis as it considered the applications.

The licences announced on Wednesday will enable 40 vessels to continue to fish in Guernsey waters from February 2022.

But the French and British are arguing over the nature and extent of the evidence required.