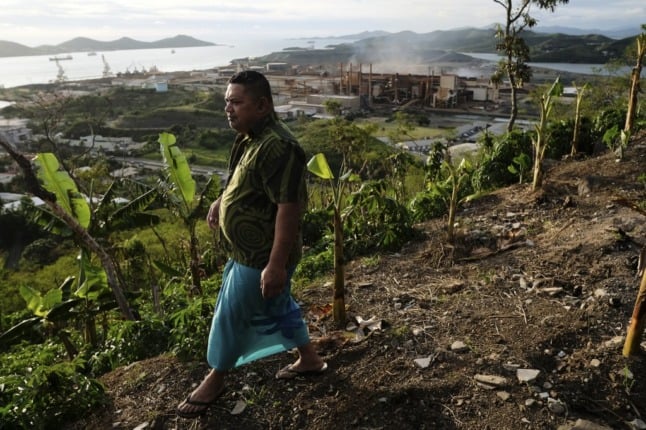 A man walks through his vegetable garden in New Caledonia. The islands are set to vote in a referendum to determine whether they will become independent from France. (Photo by Theo Rouby / AFP)

The New Caledonia archipelago is located in the Southwest Pacific Ocean some 18,000km away from mainland France.

On Sunday, it will have a referendum on independence for the third time since 2018.

The islands are currently considered a collectivité outre-mer sui generis, a French overseas territory with a significant degree of autonomy.

Other French-speaking territories across the world have various degrees of independence from the central French government in Paris. These constitutional differences can be grouped into categories that we break down below:

In the Caribbean, these include: the islands of Guadeloupe and Martinique in the eastern Caribbean, which are home to about 400,000 people each; and the Antilles islands – a former French sugar colony, which was powered through African slave labour.

Other DROM territories include: French Guiana, a small country on the northeastern coast of South America; the tropical island of La Réunion, which is found in the Indian ocean; and Mayotte.

Other French territories, known as overseas collectivities, are more autonomous and can pass their own laws, although some areas like defence are run from Paris.

French Polynesia (which includes Tahiti), Wallis and Futuna, Saint Pierre and Miquelon, Saint Martin and Saint Barthelemy are among the COM territories. Each of these places has varying degrees of autonomy from Paris. Many are heavily reliant on French subsidies.

The collectivité outre-mer sui generis status of New Caledonia gives residents of the island the possibility to have both Caledonian and French citizenship. It also has its own armed forces.

The only French overseas territory still referred to under the TOM label are the uninhabited islands that make up the French Southern and Antarctic Lands. The only visitors are researchers working in scientific stations.

Uninhabited Clipperton Island, a coral atoll 1,000 kilometres off Mexico in the Pacific, is the centre of a huge Exclusive Economic Zone administered by France’s overseas territories ministry. It holds the status of an overseas state private property (propriété domaniale de l’État) owned by France.

Collectively, all of the inhabited territories above are colloquially referred to as DROM-COM. They are home to 2.7 million people, around four percent of the French population.

In the past, they were known as DOM-TOM – and some people still refer to them, incorrectly, in this way.