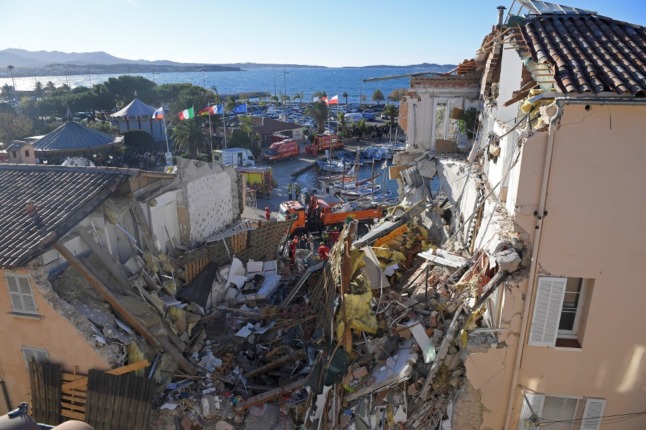 French firefighters search through the rubble of a collapsed building in Sanary-sur-Mer. Time is running out to find survivors. (Photo by NICOLAS TUCAT / AFP)

At least one person has died after a gas explosion destroyed a residential building overnight.

But French rescue workers Tuesday did manage to extract a mother and baby alive from the rubble of the building in the Mediterranean coastal city of Sanary-sur-Mer.

They are scrambling to rescue more missing people thought to have been injured by the blast, which was heard as far as eight kilometres (five miles) away.

“Among the five people sought in the debris, three have been located, a woman and a baby were brought out conscious, and an unconscious man is currently being removed,” fire officials said.

“It took more than two hours to get the baby out. He’s been taken into care by emergency personnel and is doing fine,” Colonel Eric Grohin of the regional fire department later told journalists.

The explosion injured three other people who were brought to hospital. Searches were meanwhile continuing for the two other missing in the rubble.

“Emergency teams on site detected a strong smell of gas,” the government’s regional authority said in a statement.

Two adjacent buildings were also heavily damaged in the blast that took place in the port at Sanary, a city of around 15,000 people southeast of Marseille.