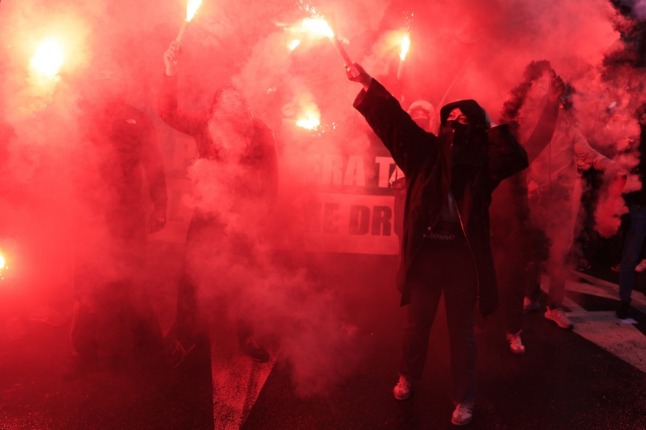 Demonstrators hold flares during a rally to protest against French far-right 2022 presidential candidate Eric Zemmour in Paris, on December 5, 2021 on the day of his first official campaign rally.

French police in Paris were on high alert in Paris Sunday.

Whilst there was no mass trouble there was enough incidents to worry French authorities and the public about what might lie ahead over the next few months during what promises to be a highly divisive election campaign.

Firstly a man appeared to lunge at Zemmour as he walked through the crowd to get to the stage. His motives were not clear but it left the anti-Islam, anti-immigration candidate with a wrist injury.

Then in scenes many commenters said were reminiscent of a Donald Trump rally, supporters of Zemmour assaulted several anti-racism protestors when they stood on chairs to reveal T-shirts spelling out ‘Non au Racisme‘.

Punches were thrown along with chairs whilst one supporter of Zemmour was seen hitting on of the female protesters. The protesters from SOS Racisme were chased out of the venue with at least two of them seen bleeding from wounds.

A crew from the popular but critical Quotidien nightly TV news show were also booed and removed by security, with hostility to the media a feature of the speeches at the event. Journalists from investigative site Mediapart reported that they were assaulted by Zemmour’s followers.

In all 62 people were detained, including the man who grabbed the far-right candidate.

Reactions to the violence and the possibility of further trouble has been mixed.

In comments published in Le Monde, Antoine Diers, a spokesperson for Zemmour’s new party – La Reconquête – played down Sunday’s violence. “If there was an excessive use of force, I regret it, but I find that with all the provocations that we experience, we are truly very calm,” he said.

Others on the right of French politics have been lukewarm, at best, in their condemnation of the violence.

Valérie Pécresse, who is running for the presidency as the candidate of The Republicans told France Inter: “Provocations in meetings exist and they are never very nice. I have had them, like everyone else. We should ban violence in rallies as much as possible – in both senses because the extreme left is sometimes ultra-violent at rallies.”

Christophe Castaner, the former Interior Minister and head of Macron’s LREM party in the National Assembly, was one of the chief critics of Sunday’s incident.

“We can see clearly that the far-right, whether it has the face of Eric Zemmour or anyone else, does not change,” he told Europe 1. “The far right is carried by violent attacks against its opponents and by the violence of attacks against France.”

France hasn’t seen major acts of violence during a presidential campaign since Jean-Marie Le Pen ran as the National Front candidate in the 1990s.

While, SOS Racisme have yet to declare that they will continue to protest at Zemmour rallies, it is likely that demonstrations will continue. On Sunday, thousands marched against the candidate in Paris and elsewhere in the country.

Erwan Lecoeur, a specialist on the French far-right, says its likely that the Zemmour campaign will continue to provoke trouble.

“The Eric Zemmour campaign has been stirring up hatred for months, with violent [verbal] attacks of entire population groups like Muslims, immigrants, migrants and women. It is surrounded by people who are prone to violence and who practice violence. So yes, we can expect that violence will be an element throughout this presidential campaign,” he said.

“Chaos and confusion is in his interest. It allows him to cast himself as a victim of ‘the system’ which is determined to shut his campaign down, to divide his opponents and to create an unhealthy climate that allows Zemmour to impose his idea of a ‘nascent civil war’, in which he presents himself as a defender of the Christian West, and the only one able to rouse the French fighting spirit.”

“There is a very dangerous phenomenon that has spread across democratic societies for years and seems to be erupting in France. When we look at other countries, we cannot say that the worst is impossible. In India, Hindu-nationalist-fascists are in power and there have been outbursts of violence with many deaths. In the United States and Brazil, violence has been a major driver that has overwhelmed politics.”

Sunday’s violence is yet the latest example of controversy to have shone a global spotlight on Zemmour’s campaign – this is probably just what the candidate wanted.

“He plays the devil card to capture media attention. We can see that it has propelled him into the public eye.”

Current polls place Zemmour third after Emmanuel Macron and between Marine Le Pen. He would have to gain at least seven percentage points in public support to stand a chance of making the second round of the 2022 presidential election.

It is yet to be seen whether Zemmour will even collect enough signatures of support (parrainages) from elected officials to be able to legally run for the presidency.