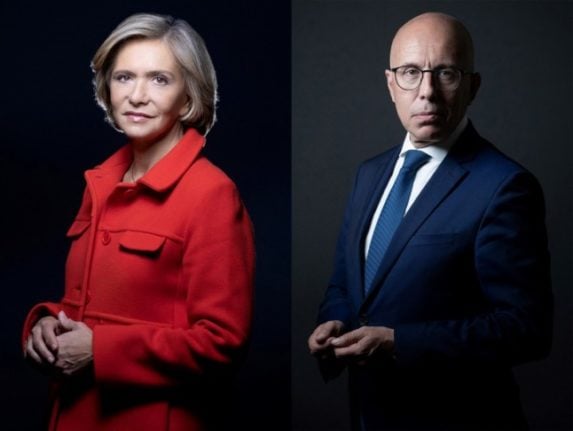 Valerie Pecresse (L) and Eric Ciotti (R) will battle to win the endorsement of The Republicans to stand as the party's candidate in France's 2022 presidential election. (Photo by Joël SAGET / AFP)

France’s main conservative party whittled down its five presidential candidates to two on Thursday after the first round of a primary vote, with hard-right southern MP Eric Ciotti and head of the Paris region Valerie Pecresse progressing to a run-off.

The results spell disappointment for former EU negotiator Michel Barnier and ex-health minister Xavier Bertrand, who were seen by many as favourites at the start of the primary process, and are now out of the race.

Pecresse, seen as a moderate, is bidding to be France’s first woman president, while Ciotti is known for his hardline views on Islam and immigration which are often close to those of the far-right.

Analysts say the Republicans primary outcome is crucial for the shape of next April’s election, which President Emmanuel Macron is currently favourite to win.

Roughly 140,000 members of the Republicans party, which traces its roots back to French war hero Charles de Gaulle, were called to cast their ballots electronically. The results of the final round are to be announced on Saturday.

Party boss Christian Jacob told reporters that Pecresse and Ciotti had both received slightly over 28,000 votes each, with Ciotti gaining 25.59 percent and Pecresse 25 percent of ballots cast.

The party counts Jacques Chirac and Nicolas Sarkozy as former presidents, but has been out of power at the national level since 2012.

Their candidate for the last presidential election in 2017, ex-prime minister Francois Fillon, started out as the favourite but saw his campaign derailed by sleaze allegations that included fraudulently employing his wife as a parliamentary assistant.