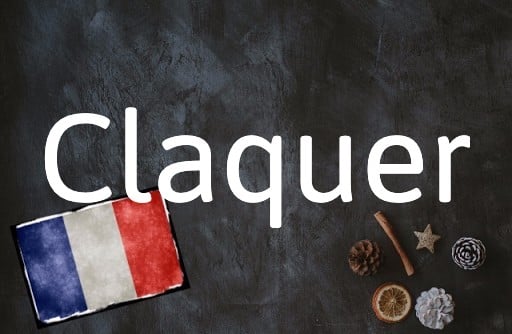 Why do I need to know the word claquer?

Because it is extremely common and has a wide range of uses.

Claquer (pronounced ‘clack-eh’) is a French verb whose most common use means to slap.

But it has a number of secondary uses – to click, slam, bang, rattle and clack. Basically, it is used to signify an action so forceful that you can hear it making one of those sounds. Say it aloud: the word itself is onomatopoeic.

It can also be used in a more metaphorical sense to reflect not a physical blow but a disappointment – like the English metaphorical ‘slap in the face’ or to describe something like a drink that has ‘a kick’ or ‘a hit’.

The word has been used in France for more than a millennium and has similar equivalents in the Middle-Dutch language of the 12th Century (Klacken). It is thought that the word originally stemmed from a the Proto-Indo-European language of the bronze ages some six thousand years ago – when glag meant ‘to make a noise, clatter or chirp’.

Claquer can even be used to emphasise the power of an alcoholic beverage, as one of The Local’s editors recently discovered.

First vin chaud of the season 😊🌲 (and it was a vin chaud 'qui claque' aka with the hit of extra rum 😜) pic.twitter.com/kuNDcxW648

Claquer can be turned into the noun, claquement. A claquement de doigts is a finger snap.