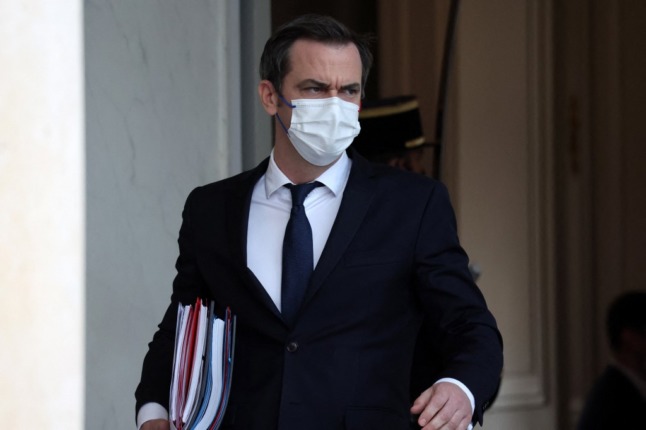 *To get the latest on the possible new Covid measures in France you can read our updated story HERE.

There is a worrying uptick in Covid-19 cases in France with the current daily average of new infections standing at more than 18,000 – up 84 percent from last week.  Admissions into intensive care are up 35 percent and deaths are up 54 percent.

READ ALSO What is driving the explosion of Covid cases in France?

After a meeting of the Defence Council on Wednesday, government spokesman Gabriel Attal announced that consultations with local authorities about extra measures are now ongoing and a press conference was scheduled for Thursday at midday.

This follows the publication of advice on extra measures from the Scientific Council.

Here’s what we can expect;

But that still leaves ten percent of the eligible population who are yet to have a single dose – a figure that rises to 13 percent among the over 80s, who are at greater risk anyway because of their age.

READ ALSO Who gets a Covid vaccine booster shot in France?

The government already uses the health pass to push people into getting vaccinated and is also pushing a booster dose campaign.

From December 15th, the health passes of over 65s who are eligible for a booster but have not had one will be deactivated. Close to a third of over 65s have already received their third shot.

Booster doses will be made available to the over 50s from December and it is possible that the government will expand eligibility to other age groups soon.

Another decision on the table is whether to expand the vaccination programme to under 12s. Children aged 6-10 have seen a huge increase in case rates in recent weeks, which is thought to be a factor in the general rise in case numbers.

This is unlikely to be announced this week, as the government will require advice from the medical regulator Haut autorité de Santé, but is likely to be under consideration.

The health pass will remain in place and checks on health passes will be stepped up, Attal has announced.

In addition to the deactivation of passes for those who are eligible for a booster but don’t get it, some medics are already calling for the testing option for unvaccinated people to be scrapped.

For now, the national government has been reluctant to enforce mask wearing in venues where the health pass is used – but that may change.

The Scientific Council has also called for the government to reintroduce compulsory mask wearing in certain places.

These rules were relaxed in the autumn, when the government announced that children would not need to wear masks in primary schools in départements with low covid infection rates, although the mask rule was reintroduced on November 15th in schools.

In many areas local authorities have imposed extra mask rules, including for outdoor public spaces and in health pass venues.

READ ALSO Where in France is reintroducing mask rules?

In 26 of France’s 101 départements, local authorities have made masks obligatory even outside according to Sud-Ouest.

In many places, masks will also be obligatory at Christmas markets, while they are also required in ski resorts over the winter.

The government has not ruled out a return to guidelines that encouraged businesses to bring in remote working – a measure that the Scientific Council supports.

The Labour Minister, Élisabeth Borne, has repeatedly called on businesses to respect social distancing measures where possible. The current health protocol says only that businesses should should engage in dialogue with employees to determine the best home working policies.

READ ALSO Télétravail: What are the rules as French workers return to the office?

The number of businesses that have at least one day of home working per week has been steadily declining – with 10 percent in September compared to 19 percent in August.

The government has been pretty unequivocal on this one, with government spokesman Gabriel Attal saying: “There is absolutely no lockdown planned for today, soon, or far into the future,” although he did add: “But nothing is ruled out in principle”.

The Scientific Council calls only for “limitations on gatherings” in its advice, without going into more detail.

Choosing to impose such measures shortly before Christmas would likely be an unpopular political move. But a degrading public health situation would also open the government to criticism.

Covid tests for “convenience” – ie in order to use the health pass – are no longer free for unvaccinated people – a move that was designed to encourage people to get vaccinated.

The Scientific Council says this is no bad thing, but has also said that people experiencing symptoms should get tested as quickly as possible. Tests for those with symptoms or contact cases remain free, and the Council has called on the government to launch a national communications campaign to reinforce this message.

The Scientific Council has also called on testing to be reinforced in schools. Given that children under the age of 12 are not eligible to get vaccinated, there is a fear that the virus is spreading rampantly though primary school classrooms.