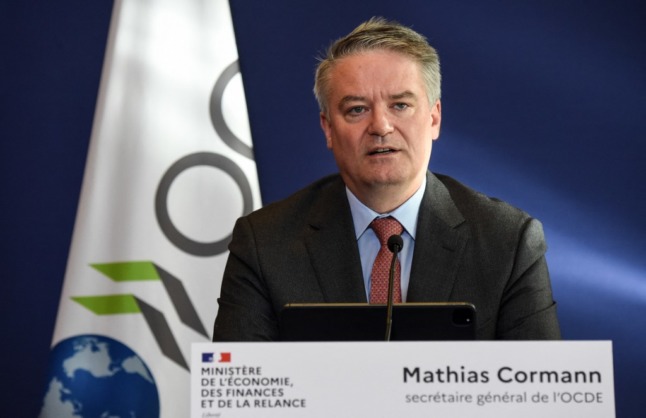 OECD head Mathias Cormann addresses a press conference about a new OECD economic study about France. It found that the government responded well to the pandemic. (Photo by Eric PIERMONT / AFP)

The latest Organisation for Economic Co-operation and Development (OECD) survey of France has revealed some encouraging conclusions.

“France’s response to the COVID-19 crisis has been swift and effective, enabling it to emerge from the health crisis with jobs and household incomes well protected and its economic capacity largely preserved,” said OECD Secretary-General, Mathias Cormann, at the unveiling of the survey.

“A rigorous implementation of the government’s Recovery and Investment Plans will help to turn the rebound into lasting sustained growth, building a greener, more digital and more resilient economy.”

The report warned however that while it was important not to withdraw financial support for households and businesses, it would be worth targeting this spending more efficiently. Money should go to ‘viable’ businesses and sectors to encourage investment, it said.

Among all the OECD member nations, which are composed of high-income countries described by one economist as a ‘rich men’s club’, France has the highest public spending as a share of GDP.

The organisation said that French businesses had been slow in adopting digital technologies and that this was harming productivity.

It also noted that France needed to invest more in professional training to address labour market shortages and in incentives to encourage transition to a greener economy.