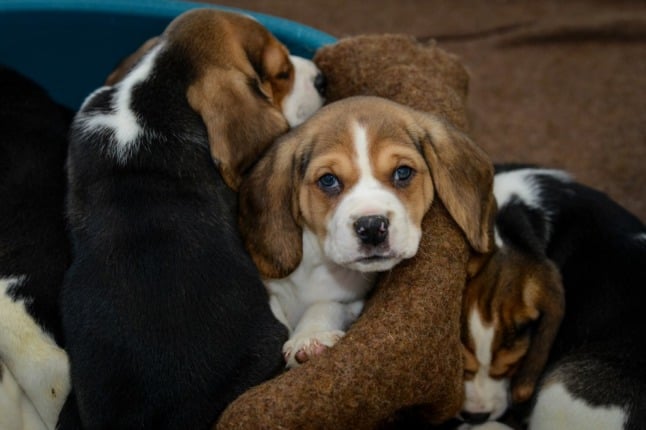 Sales of dogs and cats will be restricted in pet shops. Photo: David Edne

As well as the measures targeting circuses, the new law will raise the maximum penality for mistreating animals to up to five years in prison and a fine of €75,000, and will tighten restrictions on the sale of pets.

Loďc Dombreval, the LREM co-sponsor of the law, conceded that other controversial issues had not been included within the scope of the legislation, which won cross-party support in both houses of parliament.

“There will inevitably come a day when… we will debate sensitive issues such as hunting, such as bull-fighting, or some animal-rearing practices,” said the lawmaker, who is also a veterinarian.

Barbara Pompili, the French Ecology Minister, has said of the wide-reaching legislation: “To act in support of animal well-being is the mark of a conscious society and of its responsibility towards a fragile natural world. It is a sign of mature civilisation.”

Here’s what you need to know:

The law makes sure that first-time buyers of cats or dogs would have to sign a ‘certificate of commitment and understanding’ before making their purchase. After the signed document is delivered to the authorities, future owners have seven days to change their mind – the idea is to prevent people from ‘impulsively’ buying pets only to abandon them later.

The new law also strengthens already existing sanctions for the abandonment of a pet which currently stand at a maximum penalty of two years’ imprisonment and a €30,000 fine.

Pet shops will not be able to sell dogs and cats from 2024 – and won’t be able to display them in shop windows. Only abandoned dogs and cats will be available for sale in pet stores, working with rescue shelters.

Online pet sales will be banned, with the exception of websites of licensed breeders and pet stores.

Sales of pets to minors will be banned, except with the parents’ consent.

The maximum penalty is now five years in prison and a €75,000 fine.

The new law also makes it a crime to deliberately kill pets or otherwise tamed animals. However, judges may decide to punish animal abusers with mandatory educational courses on animal cruelty, rather than prison sentences at their discretion.

Outside the criminal justice system, lessons on how to treat pets properly will be given in schools.

Bestiality is already illegal in France, but the new law imposes stricter penalties on the filming and broadcasting of sexual acts committed on animals. Suggesting sexual activity with an animal on dating websites and apps will be sanctioned with a one-year prison sentence.

The new law will ban the display of wild animals in travelling circuses by 2028 and will prevent the breeding of wild animals for circus display by 2023. As of yet, there are no guidelines as to what to do with these animals from 2028 onwards – it is possible that circus owners will be able to hold onto their beasts, but not show them to the public.

A commission has been set up to advise on how to better treat animals that are already being held captive. Fixed circuses (that don’t move around the country) are currently held to the same animal protection standards as zoos.

Aquariums are also targeted. Dolphin and orca shows will be banned from 2026, as will the captive reproduction of these animals – except in cases where such reproduction programmes are being used for scientific research or in sanctuaries.

The breeding of American mink and other wild species for fur will be banned altogether.

The law does not include any extra protections for livestock or other animals used in agriculture. There are no proposals for changes in the laws around hunting and bullfighting can also continue.

Often thought of as a Spanish thing, bullfighting also has a long history in south west France, although as the activity becomes increasingly controversial many local authorities have put in place bans.

READ ALSO Why hunting is becoming an election issue in France