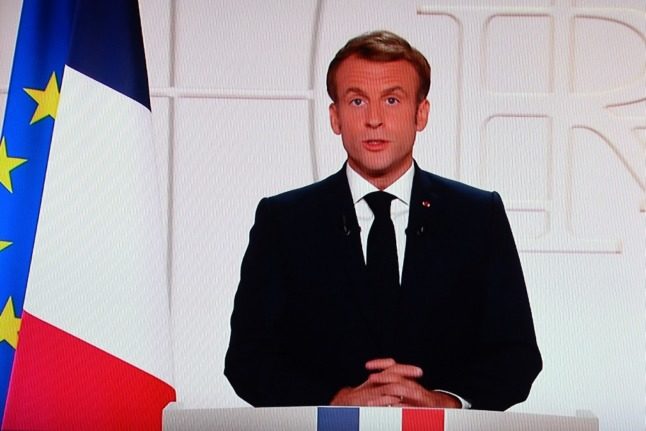 President Emmanuel Macron’s 25 minute slot on most TV channels last night was an excellent campaign speech masquerading as a presidential address to the nation.

President Macron omitted to say so – maybe he forgot? – but he evidently intends to run for another five years in the Elysée Palace.

That was never really in doubt. The President has the right to choose the best moment to announce his candidature. The first round of the election on April 10th is still five months away.

But last night’s TV address – his ninth since the Covid Pandemic began 20 months ago – was a risky exercise in the muddling of genres. Macron can get away with it once. If he makes a habit of it, he will irritate even the 40 percent or so of the electorate which currently likes or tolerates him.

Thus President Macron announced that the rules of the health pass, limiting access to fun and travel, will be expanded on December 15th to include proof of a third or booster dose of anti-Covid vaccine for the over 65s.

READ ALSO What does Macron’s announcement change for the health pass?

Good. This is a sensible extension of a policy which has annoyed some but protected millions – sometimes against their will. Macron’s announcement of the health pass on July 12th set off a stampede for first vaccinations. France, one of the most vax-resistant countries in the world, now has almost 90 percent adult coverage of vaccines against Covid-19.

The French programme of third vaccinations – needed to keep up the protection of the most vulnerable – has been meandering along since September. Only half of the 7,000,000 people eligible have bothered to get a booster jab. The virus is gaining ground again, though less in France (so far) than in most of its neighbours.

Macron’s announcement last night set off, just like in July, a stampede for third vax appointments. He also announced that over 50s would be eligible for their boosters from December.

All of that took five or six minutes of Macron’s address. President Macron then announced that planned stricter rules on unemployment pay would be triggered – pandemic or no pandemic – from  December.  The economy is booming, he told viewers (It is. It grew by 3 percent in the third quarter alone).

Unemployment is the lowest for 15 years. There are 300,000 job vacancies but there are still 3,000,000 unemployed. To address that mismatch, Macron said, unemployment pay will soon be suspended for those considered not to be actively seeking a job.

He appealed to the Left by reminding viewers of the massive and successful intervention of the state to preserve businesses and jobs during the pandemic. He promised further new spending on the state health system.

He also appealed to the Right, promising (but not yet) a radical reform of the pension system and other measures to ensure that France becomes more prosperous by working longer. (Those French who do work are very productive but France, overall, works fewer hours than any other developed country.)

Candidate Macron also promised something that President Macron cannot deliver and cannot, in any case, happen until circa 2040. He said he had decided to give the green light to the first large programme of new nuclear power stations in France since the early 1990s.

He concluded with a rather eloquent attack on the perpetual negativism and  French-bashing of self-proclaimed French patriots, like the xenophobic pundit Eric Zemmour.

“We believe in France – in a France that remains itself, strong in its history, its culture, its language, its secular tradition, strong in what unites us,” Macron said.

“We are strong in our determination to resist dilution in a world which is turning to submission, to dogma, to obscurantism and resurgent nationalism.”

In other words, French identity can be – and should be – tolerance and unity, not hatred and division. It will be protected, he said, by European action and European unity against economic threats from China and the US, not by burying our heads in a narrow and self-defeating definition of Frenchness. (Boris Johnson, please note.)

Macron evidently believes he can win next year by appealing to the large chunk of France which wants stability and calm after the Covid pandemic, not an aggressive attack on the political and social status quo.

In other words, Macron the suited, centrist revolutionary of 2017 intends to become Macron the centrist defender of the best of France against Zemmourist or Lepennist or centre-right or left-wing doom-mongering.

Can that work? Yes, maybe.

Opinion polls give him approval ratings in the high 30s or low 40’s, the best for any incumbent president for 20 years. They show him leading the race in the multi-candidate first round on 23 to 25 percent. They show him defeating all-comers in the two candidate second round – only narrowly beating a centre-right opponent but crushing either Zemmour or Marine Le Pen.

All of that could change rapidly when the campaign proper begins – which explains why Macron wants to delay his formal announcement for as long as possible.

That is fine. But he cannot have it both ways for much longer.

It is understandable to use the presidency pulpit (and he did use a pulpit on Tuesday night)  to lecture the French on Covid. To use his presidential pulpit to launch his campaign – while claiming not yet to be campaigning – will lose more votes than it gains.