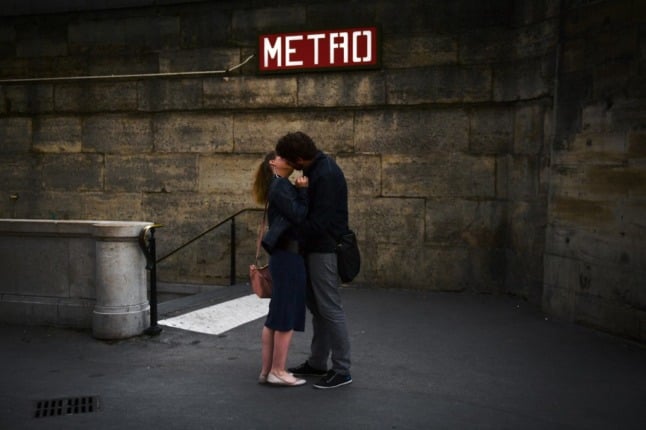 Need help with the language of love? Photo: Martin Bureau/AFP

As flirting generally takes place in an informal situation, the following phrases are mostly quite colloquial, and we’ve used them all with the familiar tu form of you.

If you’re in a situation where the formal vous is required, then we would suggest that flirting is probably not appropriate (unless you’re into role play of course, but that’s a whole other article).

Draguer – to flirt. If you fancy trying your hand at the French dating scene, draguer is the perfect word, it means flirting with or hitting on someone.

You can decide to be upfront about it and say it directly to the person you fancy. Oui je te drague – Yes, I’m hitting on you.

But you can also use it to gossip: Ce mec drague toutes les nanas au bureau ! – This guy flirts with all the girls at the office!

Find out more about that phrase here.

Chiner – to hit on. The younger generation use it all the time when it comes to chatting someone up or hitting on them. Tu le chines? – Are you hitting on him?

But be careful, this word is also commonly used when you go bargain hunting for old furniture or second-hand goods at a Brocante  (a vintage or second hand market) so don’t assume that everyone at the market is flirting with you.

Find out more about that phrase here.

Faire la cour – to woo. This is a pretty dated phrase but you may still hear it, and not only if you’re watching a historical movie.

Aborder – to approach. This can be used in several contexts to mean an approach or to broach a subject, but in a romantic sense it means making your first approach to the object of your affections.

You can use this word when it comes to talking to someone for the first time, whether it is online or in real life.

Le ou la faire craquer – to fall for someone. Craquer means to ‘give in’ so you’ll use this idiomatic phrase when you’ve managed to seduce someone or when you have been seduced.

Elle me fait trop craquer – I’ve really fallen for her.

En pincer pour – to like. Pincer means ‘to pinch’ but this idiomatic phrase is used when you are really fond of someone.

Décrocher un premier rendez-vous – To get a first date. It’s not always easy but when it happens you may want to share the news.

J’ai enfin décrocher un premier rendez-vous avec elle ! – I finally got a first date with her!

Tu crois qu’il se l’est tapée ? – Do you think he had sex with her? Si seulement je pouvais me le taper ! If only I could take him to bed!

Pécho – making out. Pécho is verlan (reversing the order of syllables in a word) of choper which means ‘to grab’ or ‘catch’. This phrase can mean different things (find out more here), and one of them is ‘making out’ or ‘hooking up’.

Smacker – to kiss (without the tongue). Although ‘to smack’ actually means slapping someone in English, in French it can be used to describe ‘un smack’, a kiss where only the lips touched (as opposed to the French kiss) and the verb ‘smacker’ derives from it. Il m’a smacké ! – He kissed me!

Séduire – to seduce. The ultimate goal is to seduce someone when you’re flirting. Séduire is now slightly old-fashioned and it’s often used in a more metaphorical sense such as consumers or voters being ‘seduced’ by a brand or a politician, but you can also use it in a romantic situation.

Elle cherche à me séduire – She’s trying to seduce me.

Here are some key phrases to ask someone out:

Prendre un verre – To have a drink.

Ça te dit d’aller prendre un verre ? – Would you fancy having a drink?

Tu veux qu’on aille boire un coup ? – Do you want to go get a drink?

Tu veux boire quoi ? – What do want to drink?

Manger un bout – grabbing something to eat. Here’s an informal way to ask somebody to have dinner with you. On va manger un bout ? – Let’s go eat something?

Here are some phrases to ask for someone’s number:

Je peux prendre ton 06 ? – In France, cell phone numbers start with 06, so it’s an informal way to ask someone his or her number.

If you feel like tackling online dating in France, check out our guide. 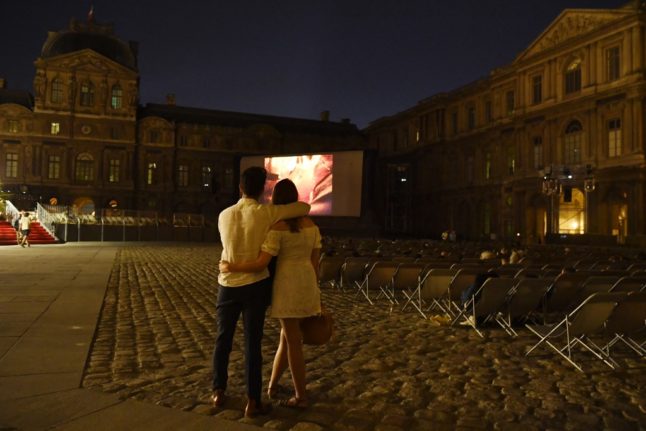 It is of course completely normal for the titles of books, films, TV series and other artworks to be translated in a non-literal way – usually the translator will try and get something that conveys the sense and message of the artwork, rather than going for a word-for-word translation.

But from concepts that get lost in translation to untranslatable puns and – of course – the French fondness for English phrases, some titles may surprise you.

Groundhog Day – Un jour sans fin (an endless day) – Groundhog day in the US and Canada is a festival celebrated on February 2nd that is said to predict spring weather.

The festival doesn’t exist in France, or in the UK come to that, but while British audiences just had to accept a film with a weird title, in France it was translated as ‘an endless day’, which more accurately describes what the film is all about.

Lock, Stock and Two Smoking Barrels – Arnaques, Crimes et Botanique (scams, crimes and botanicals) – the film’s English title is a pun on the phrase ‘lock, stock and barrel’ which means complete, with ‘smoking barrels’ as a nod to the gun storyline.

Puns are pretty hard to translate in general, but a mixture of two puns obviously had the French translators reaching for the white flag. Instead they’re gone for a three-word list that offers a pretty fair overall summary of what the film is all about.

The Shawshank Redemption – Les Évadés (The Escaped) – Frank Darabont’s slow-burn classic prison drama based on Stephen King’s short story couldn’t really translate into French, so you can’t blame them for not trying. Instead, they kept it simple.

Home Alone – Maman, j’ai raté l’avion (Mummy I missed the plane) – another example of deciding not to bother trying to translate a phrase and just giving a straightforward description of what the film is about comes from Home Alone.

Con air – Les ailes de l’enfer (the wings of hell) – the 1997 US film centres on a prison break aboard the Justice Prisoner and Alien Transportation System aircraft, nicknamed ‘con air’, with ‘con’ the English abbreviation for convict (prisoner). Not having an exact French-language equivalent, the translators went for the frankly much more poetic ‘the wings of hell’.

It gave French distributors a bit of a problem when the sequels came out, but they solved it by ignoring any links between the first film and those that followed completely. Die Hard 2: Die Harder translated to 58 Minutes Pour Vivre (58 Minutes to Live), while Die Hard with a Vengeance – which, in English, also pretty much glossed over Die Hard 2 for aesthetic reasons –  became Une journée en enfer (A Day in Hell)

A French translation of this time of day of course exists (crépuscule) but instead French translators decided to spell out the theme of the series – forbidden desire. The books appeared in France under the titles of Fascination (fascination) Tentation (temptation) Hésitation (hesitation) Révélation (revelation) L’Appel du sang (the call of blood) and Midnight Sun.

The A Team – L’agence tous risques (the risk-all agency) – similarly with The A Team, French film distributors apparently decided that audiences needed to be clearly informed of the premise – a group of agents who would take on any mission, even the most risky.

Airplane! – Y a-t-il un pilote dans l’avion? (Is there a pilot on the plane?) – they kept the name of the 1980 disaster movie spoof, surely? No, the French decided to rename that, too  … and don’t call me Shirley.

No time to die – Mourir peut attendre (death can wait) – if you didn’t know better you might assume that the cool, classy ‘death can wait’ was the original title of the latest James Bond film and ‘no time to die’ the awkward translation. In fact, it was the other way round.

Jaws – Les dents de la mer (the sea’s teeth) – the title of the Spielberg movie in English just refers to the shark, but the title in French refers to both the shark itself and the greater sense of the unknown dangers of the deep.

The weird and/or sexist

Mean Girls – Lolita malgré moi (Lolita despite myself) – French schoolgirls are mean, bitchy and cliquey too, so there are plenty of options in French for a near-literal translation of the title of high-school drama Mean Girls.

Instead the translator went for the fairly problematic option of ‘Lolita despite myself’ – by which we can assume he never read Nabakov’s classic novel (first published in France, incidentally) telling the story of the paedophile Humbert Humbert and his victim Lolita.

Little Women – Les 4 filles du docteur March (the four daughters of Dr March) – it’s a film (based on a book) entirely about the lives of women, the four March sisters and their mother. Dr March barely features (because he’s away fighting in the American Civil War) but that doesn’t stop the French version from deciding that it’s all about him.

The inexplicably sexy ones

Sometimes English language movie titles remain in English but with different titles – for example The Hangover in France is Very Bad Trip. But there is also a distinct trend to just add the word ‘sex’ or ‘sexy’ to an English language title to, well, sex it up a bit . . .

Not Another Scary Movie – Sex Academy

Out Cold – Snow, Sex and Sun

The English titles for French films

With all the effort that goes into translating English titles into French, you might get a surprise when you start viewing something with an English title, only to find that it’s as French as a snail-filled baguette.

Family Business – the Netflix series about a Paris family who get drawn into international drug smuggling is smart, funny and completely French – it just has an English title.

LOL – although there is an American remake of the teen film LOL, the French version (starring Sophie Marceau) came first.

In France people use the acronym MDR (mort de rire or died laughing) in text speak, but the filmmakers obviously reckoned that the English acronym was well enough known for the title.

The film is entirely in French, with only a very brief foray into English when the characters go on a school trip to London (and experience rain and horrible food, naturally).

The film depicts three older women who take a road trip to try and rediscover their youth and friendship – no prizes for guessing what they end up doing.

For all that French cinema distributors are happy to have the odd partially or wholly English title, strict language rules in French-speaking Canada mean that movies there often have completely different titles.

For example American Pie – released under its English name in France – became Folies de graduation (graduation madness) in Quebec, while Ghost also kept its original title in France but was released as Mon Fantôme d’amour (My ghost love) in Quebec. 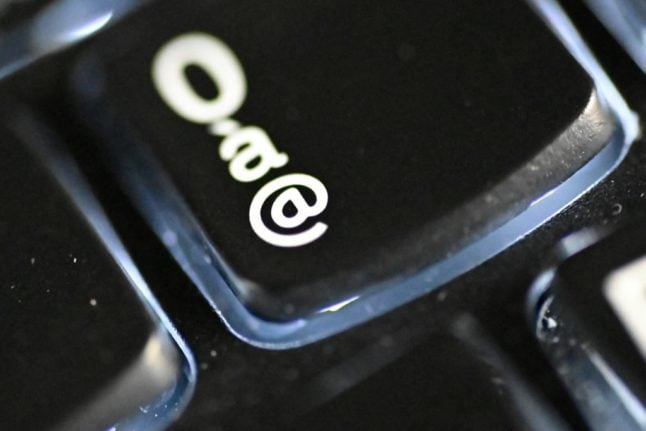 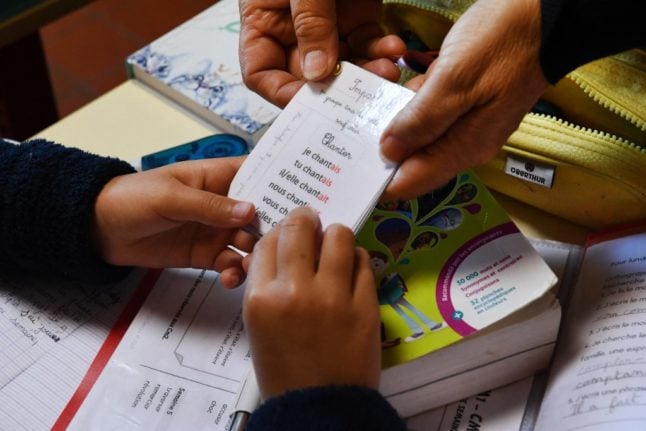