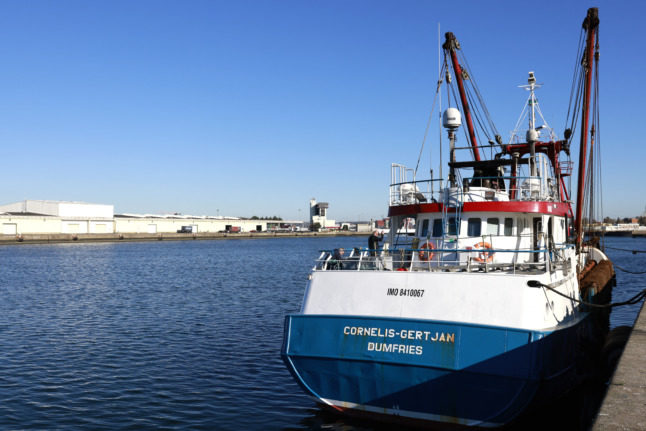 British fishermen stand on the trawler 'Cornelis-Gert Jan' in the harbour of Le Havre after it was detained by French authorities. Photo: Sameer Al-DOUMY / AFP.

Maritime police ordered the boat sequestered at the Channel port of Le Havre on Wednesday, saying a spot check revealed it had gathered more than two tons of scallops in French waters without a proper licence.

“The captain of the Cornelis Gert Jan has been summoned to appear at a court hearing in Le Havre on August 11, 2022,” the city’s deputy prosecutor, Cyrille Fournier, said in a statement.

He faces charges of “non-authorised fishing in French waters by a boat from outside the European Union,” he added, which carry a maximum fine of €75,000 as well as “administrative penalties”.

The owner of the trawler said on Thursday that it was fishing legally in French waters, alleging that the fine appeared to be “politically motivated”.

“We’ve not had this issue” previously, Andrew Brown, a director at Scotland-based Macduff Shellfish, told AFP, adding they had not yet been able to contact French authorities.

Britain and France  are at loggerheads over licensing rules for EU boats wanting to operate in waters around Britain and the particularly Channel Islands.

EXPLAINED: Why are France and the UK fighting about fish?

Paris has warned that it will ban UK boats from unloading their catches at French ports starting November 2nd, and impose time-consuming customs and sanitary checks on all products brought to France from Britain.

French fishermen accuse officials in Britain as well as its protectorate of Jersey of using Brexit as an excuse to keep many from securing licences for waters they say they have plied for years.

London has denied the claims, and promised “an appropriate and calibrated response” to the French measures, since the British fishing industry depends on French ports as a gateway to Europe, its main export market.

Britain has summoned the French ambassador to explain “threats” made over the post-Brexit fishing rights.