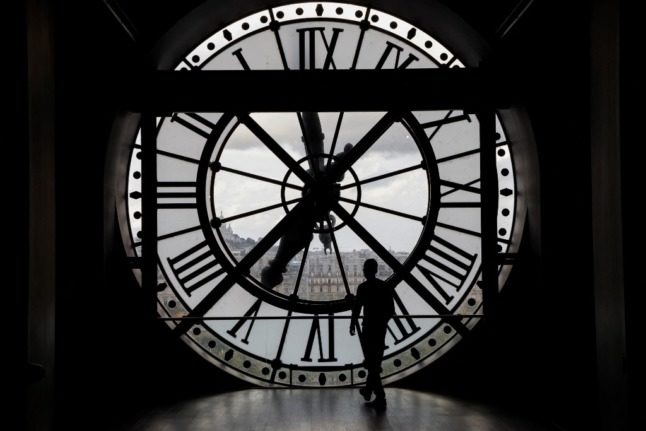 Clocks will change this weekend in France. Photo: Ludovic Marin/AFP

France moves to winter time this weekend, with 3am on Sunday, October 30th marking the moment when clocks go back by one hour, giving most people an extra lie-in on Sunday morning.

In place in the EU since 1976, the twice-yearly changing of the clocks has been controversial for some time and in 2019 lawmakers in the European Parliament voted by a large majority – 410 MEPs against 192 – in favour of stopping the changing of the hour from 2021.

However, following the vote, the Parliament specified that each EU member state would decide whether they would keep summer time or winter time.

In France, public opinion is resoundingly in favour of scrapping the hour change. A public consultation made in early 2019 collected more than 2 million responses, with a majority of French voters wanting to stick with summer time.

The 2021 deadline to scrap the change, however, was derailed by Covid which disrupted the normal parliamentary timetables in most countries.

But as normal political life resumed after the pandemic, a further problem emerged – although EU countries agree on scrapping the hour change, they cannot agree on whether to stick with summer or winter time.

Having many different EU countries in different time zones would create all sorts of practical problems for travel, business and trade, not to mention the substantial number of cross-border workers who live in one EU country and work in another.

Green MEP Karima Delli told French TV channel BFM in 2021: “The ball is in the court of the Member States.

“We agree on the time change, but what really blocks is: do we stay on summer time or winter time? This is a real problem because the Member States cannot agree.”

She underlined “indirect problems on connectivity, on transport… All this must be organised”, adding: “If I am French and I work in Germany, I am not going to change my watch in the morning and in the evening. We really need harmonisation.”

But with the pandemic followed by the Russian invasion of Ukraine and cost-of-living crisis, the hour-change has been gradually slipping further and further down the priority list of both the EU and its member states.

The text on the hour-change is not currently scheduled to be even discussed at the EU level, and it is therefore unlikely that this year’s hour change will be the last.