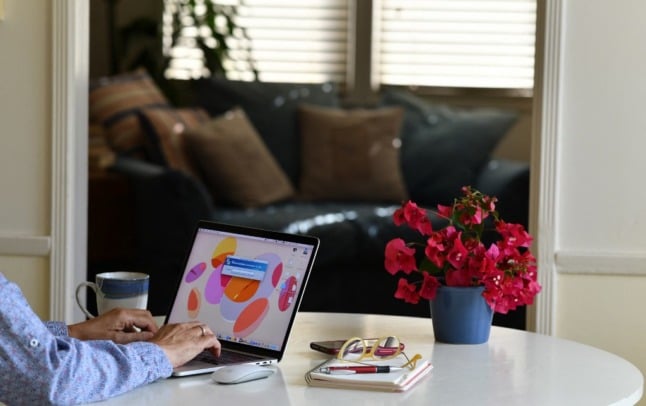 Working from home might be technically easy, but there other things to consider. Photo: Chris Delmas/AFP

These days it is perfectly possible to be physically located in France, while working remotely for a company based in the UK, the USA or other.

It’s grown since the pandemic and is increasing popular for roles including journalism, translating, online or web services, copy-editing or online tutoring, plus a host of other roles that can be done using just a laptop and a decent wifi connection.

But while modern technology means this is increasingly practical, people doing this option need also to consider how it affects their residency, work permits and tax status.

We asked Fiona Mougenot, a lawyer and partner in the immigration specialists Expat Partners, what are the things that people need to think about.

You might have heard the term Digital Nomad, and some countries including Spain are even offering Digital Nomad visas to tempt people to head to under-populated areas of the country.

France does not, as yet, have a similar visa although the country is keen to attract tech workers, but Fiona says people need to be clear on their long-term aims.

A Digital Nomad is usually someone spending a short time in a country, or moving between various countries while doing some short-term tech-based work – for example food bloggers or Instagram influencers.

Fiona says: “If you are genuinely a Digital Nomad and you’re just in France for a few months that is one thing, but if you want to live in France, then you need to consider your longer-term access to French residency, maybe citizenship one day and in the shorter term healthcare and benefits.”

So what actually counts as ‘working in France’? French visa and residency applications generally ask if you have emploi en france (employment in France).

But does that include any work done while you are physically located in France?

There is however, a big caveat to this – do you really want to say that you’re not working in France?

While it may initially seem simpler to not ‘officially’ be working in France, this can have an effect on many other things such as your access to healthcare and social benefits in France, as well as your pension rights.

If you intend to stay in France in the longer term you will eventually need to apply for long-term residency and maybe even citizenship and in most cases this will require you to prove that your main base of operations is France, not the country where your employer is based.

Fiona said: “It’s complicated, this is a real grey area as most of the rules were put in place before remote working became widespread. Everyone’s circumstances are different, but when we have clients making this decision once we have pointed out to them all of the knock-on effects people almost always decide that it’s better to be officially working in France.

“Many people have a desire to avoid the French admin, which is understandable, but if you see yourself staying in France for any kind of long or medium term future it’s inevitable and if you want to do things like registering children in school or retiring in France and having access to healthcare then you will need to engage with the system.

“And if you want to apply for a 10-year residency card or citizenship one day then you need to show that your main economic base is France, if you have been declaring that your work was done elsewhere then you may find that these years don’t ‘count’ towards the five-year mandatory residence period for citizenship, for example.”

If you don’t intend to make France your home, you may want to spend long periods here anyway – especially if you have a second home – and if you’re from a non-EU country then that requires a visa.

Most second-home owners who don’t intend to work will apply for a visitor visa – but does this rule out doing a few days of work remotely from your French property?

Visitor visas ask people to agree not to have emploi en France, but what about doing some work for your company back in the UK or the USA?

Fiona says: “Depending on the circumstances this would probably be OK, provided that your work has no connection to France or a French company. You remain a visitor in France, with all the limitations that implies such as a lack of access to the state healthcare system, while working for a company in another country.”

However there are other things to think about, including ensuring that your employer knows where you are working and agrees to it.

Fiona said: “There are other potential issues connected to this, such as whether you would be covered by insurance in case of an accident – your workplace insurance will not cover you if your employer was not aware that you were working from France.”

Living and working in France

So if you’re living in France and decide to declare your status as working, what do you need to do?

If you’re applying now for a visa you would apply for a working visa as an entrepreneur or auto-entrepreneur, depending on whether you are an employee or self-employed.

When the time comes to apply for residency, you again apply as either employed or self-employed and provide proof if necessary of your work.

Once you are officially working in France, you then gain access to the social benefits – which are generous in France – and begin paying into your French pension. This is also available to freelancers via Urssaf.

However there are still other things to think about here, such as your position with your company regarding things like insurance.

Fiona says: “Don’t be tempted to lie to your company and pretend that you’re still in the UK, if you’re based in France – they need to know as it may affect other aspects of your employment.

If you are declaring work that is done remotely for companies outside France, this still counts in terms of your social security contributions.

However if you are billing companies outside the EU for work done, you need to be aware of the tax rules.

Since Brexit, this of course includes the UK and your work may count as ‘digital supply to UK consumers’ making it liable to UK VAT – more details here.

Everyone living in France must file an annual tax declaration, even if all of their income comes from abroad – whether that is income from work done in another country or a pension paid by another country.

We have addressed the tax situation for remote workers in France HERE.

Fiona Mougenot is a lawyer specialising in immigration law with Expat Partners. 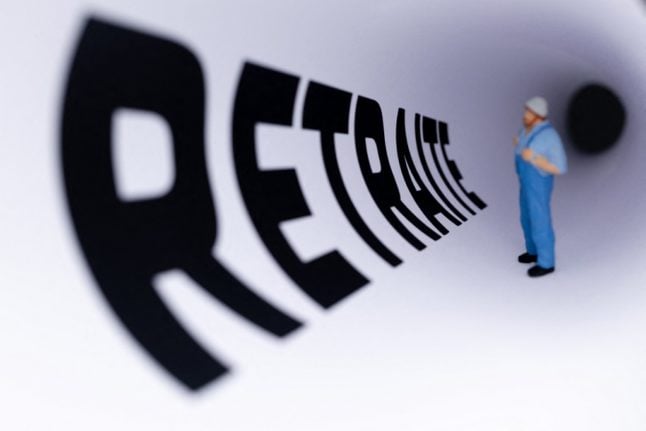 It is common for people to work in more than one country during the course of their career, and they usually end up paying pension contributions in each country. However it is not always clear how these are combined once you reach retirement age.

If you are an employee in France you will already be paying into your pension, since this is compulsory. If you take a look at your French payslip, among the deductions for social charges is the ‘retraits‘ section and this shows your pension contributions. These can be quite high – OECD data shows that the average French worker pays 11 percent of their monthly (gross) salary into their pension.

You can use the French government pension simulator to check the level of your French pension – full details HERE on how that works.

READ MORE: EXPLAINED: The website to help you calculate your French pension

In general, periods of employment outside France may be combined with years worked in France to boost or qualify for the French state pension. However, it depends on which country you have worked in, and whether that country has a social security agreement with France.

All EU, EEA countries, and Switzerland have social security coordination, so will have their pension contributions made in France calculated in the same way as for EU/EEA countries.

The first step is to look at how many EU/EEA countries you have worked in, and to check your retirement eligibility under each of those regimes.

For example, if you worked in both Denmark and in France, then you must consider the minimum age of retirement in both countries. If a person retired at the French legal age of 62, they would receive only the French portion of their pension until they reached Denmark’s legal retirement age (66 to 68), when they would start getting the Danish portion as well.

On the European Commission’s website dedicated to explaining old-age pensions across the EU, the European authorities explain how this double calculation is done. Taking the example of the hypothetical person “Rosa” who has worked 20 years in France and 10 years in Spain, the EU site explained how the two European countries would determine who pays what portion of Rosa’s pension.

Starting with France, the first calculation made determines Rosa’s current pension under the French scheme – which is based on Rosa’s 20 years contributing to the French pension system. It is determined that she is entitled to €800 per month.

READ MORE: Reader Question: How long do I have to work to qualify for a French pension?

The next calculation uses the European calculation that offers a theoretical amount – the pension Rosa would receive had she worked the entirety of her career in France.

This finds that ultimately France will pay Rosa €1,000 per month as her French pension.

As for the Spanish side, pension authorities will also look at Rosa’s “pro-rata” (or theoretical pension) if she had worked the entirety of her career in Spain. They determine that she would have received a Spanish pension of €1,200 for a full career. Then, Spanish authorities do the same European calculation where they multiply Rosa’s would be total pension (€1,200) by the number of years worked in Spain (10). They divide this number by the total number of years worked (30) to get the portion of Rosa’s total pension that should be paid by Spain.

This determines that Rosa ought to receive €400 of her pension from Spain.

You can see more examples of these calculations with specific simulations at the Europa.EU website page for State pensions abroad.

You can also watch this video, made by the European Commission, to understand how the process works for EU nationals.

The case for Brits

Brexit has made pensions more complicated for Brits, and essentially divides British workers into two groups.

Those who arrived in France before December 31st 2020 – and are therefore covered by the Withdrawal Agreement – continue to benefit from EU social security co-ordination. They should therefore have their pensions calculated as described above.

Those who moved to France after December 31st 2020 are treated as non-EU nationals for pension calculations – click HERE for a full explanation of the system for non-EU workers. 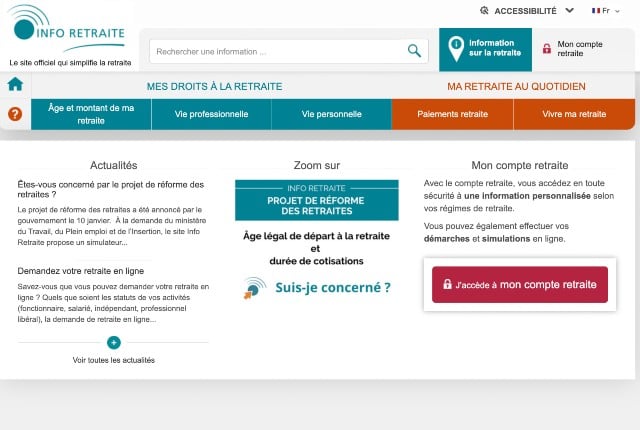 PENSION
EXPLAINED: The website to help you calculate your French pension 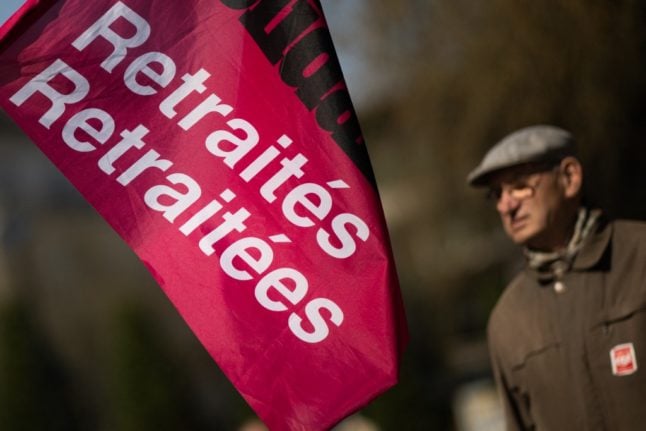