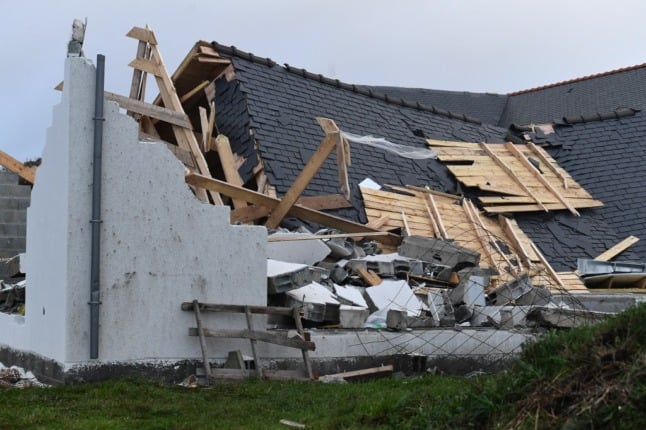 The storm hit northern France on Wednesday evening, with winds of up to 175km/h recorded overnight.

On Thursday morning 250,000 households were without electricity, mostly in Normandy and Brittany.

In Normandy – where winds of 175km/h were recorded in the coastal town of Fécamp – no trains will run until 10am on Thursday while rail workers inspect the lines for fallen trees.

The towns of Heuqueville and Octeville-sur-Mer saw roofs blown off, local fire chiefs reported, while roads were also blocked by fallen trees.

In Brittany winds of up to 140km/h were recorded in Finistère, where an uninhabited house collapsed and the roof of the Plozévet town hall was blown off. In the Paris region transport is severely disrupted on the suburban RER and Transilien lines due to fallen trees on the tracks, while parks including the Jardin du Luxembourg are also closed while storm damage is assessed.

According to information from SNCF and RATP:

RER C is not running between Pereire Levallois and Pontoise, between Massy-Palaiseau and Savigny-sur-Orge, and between Versailles Château/Saint-Quentin-en-Yvelines and Champ-de-Mars Tour Eiffel.

RER D traffic is interrupted between Goussainville and Creil.

For all these lines, traffic is expected to resume at 10am.

RER B has slight disruption along the line.

RER E traffic is severely slowed down until 9am.

Transilien Line U has disruptions along the line

Line H is disrupted between Persan-Beaumont and Creil, between Pontoise and Ermont, between Montsoult and Sarcelles, and between Saint-Leu and Valmondois, until 10am.

Line K traffic is disrupted between Crépy-en-Valois and Mitry-Claye, until 12pm.

Line L no trains are running between Saint-Nom-la-Bretèche, Forêt de Marly and Saint-Cloud, and between Cergy-le-Haut and Nanterre-Université.

Lines J, N and R are severely disrupted until 10am.

Mainline trains coming in and out of Paris could also be disrupted, SNCF has warned.

In Grand Est trains are also disrupted in the areas of Nancy, Strasbourg and Champagne-Ardennes and this is likely to continue until midday.