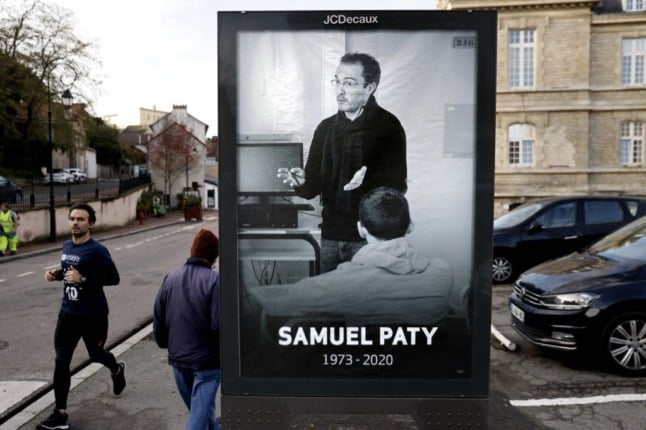 Paty, 47, was killed on October 16th 2020 as he left the collège where he taught in Conflans-Sainte-Honorine in the greater Paris département of Yvelines.

His killer, 18-year-old Chechen refugee Abdullakh Anzorov, claimed the attack was revenge for Paty showing his class cartoons of the Prophet Mohammed in a lesson on free speech.

Paty’s violent death sent shockwaves through the country and was seen as an attack on the core values drilled by teachers into generations of schoolchildren, including the separation of church and state and the right to blaspheme.

Samuel Paty Square will be inaugurated in front of the Hôtel de Cluny, opposite the Sorbonne in Paris, on Saturday morning. Paris City Hall has decided to rename the square Paul-Painlevé, in homage to the teacher and in the presence of his family. The ceremony will be closed to the public, but the square will reopen on Sunday at 9am.

At around the same time as the Paris event, a ceremony will take place in Paty’s hometown of Éragny (Val-d’Oise). A fresco created by a street artist will be unveiled at the Butte sports hall.

Some 300 people are expected to take part in a tribute at the Bois-d’Aulne collège, Conflans-Sainte-Honorine, at 2.30pm on Saturday, attended by Education Minister Jean-Michel Blanquer.

READ ALSO Why has France become so devoted to Prophet Mohammed cartoons and where will it end?

An hour later, a monument will be unveiled at Place de la Liberté in Conflans, and visitors will be able to leave messages on a ‘wall of expression’ created for the occasion.

“It is essential to pay tribute to Samuel Paty and the values he defended through his teaching, not only to perpetuate his memory and never forget, but also to remind us of our unwavering attachment to our values and to freedom of expression,” town mayor Laurent Brosse, said.

The rally “for freedom and against terror” at 3pm on Sunday at the Place de la République, in the capital, has been organised by teachers’ unions, associations and the editorial staff of the satirical magazine Charlie Hebdo – whose controversial cartoons Paty had shown his class.

The Ministry of Education also asked all schools in France to pay tribute to the teacher of history and geography on Friday. An hour of class time was devoted to discussions on the theme of freedom of expression and critical thinking, and the period ended with a minute’s silence.

Paty’s old school was due to hold a ceremony on Friday, at which a wall of freedom of expression, built by pupils in the past week was to be unveiled. A ceremony was also planned at the new Samuel Paty school in Valenton (Val-de-Marne), on Friday, where an exhibition showing the work of students on the twin tenets of fraternity and secularism was to open.