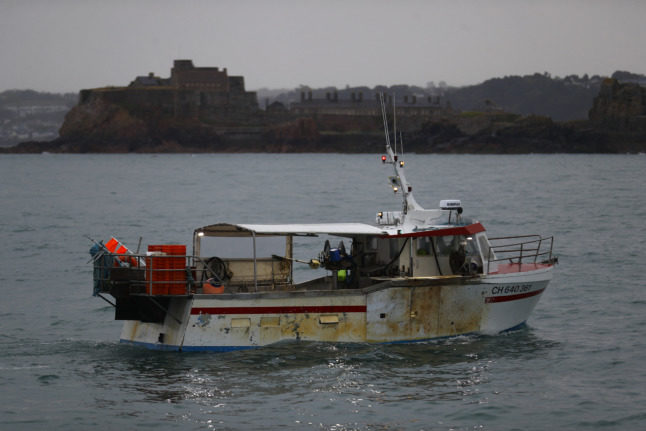 A French fishing boat protests in front of the port of Saint Helier off the British island of Jersey in May 2021. Jersey is once again at the centre of a row over fishing licences. Photo: Sameer Al-DOUMY / AFP.

France could reduce, but not entirely cut electricity supplies to the British crown dependency of Jersey this winter as part of “targeted” retaliation measures in a dispute over fishing, Europe Minister Clement Beaune told BFM-TV on Friday.

“Reducing supplies (of electricity to Jersey) is possible, but cutting the power to every Jersey resident this winter is something that will not happen and something that I do not want,” Beaune said.

Britain has refused to grant all the fishing licences sought by French boats as part of a post-Brexit access deal, leaving Paris furious and fishermen worried for their livelihoods.

Beaune had previously floated the idea of cutting power to the the British crown dependencies of the Channel Islands like Jersey which rely on nearby France for their energy.

A sequence of statements from Paris indicated that French patience on the issue had run out as bilateral disagreements on a host of issues seem to run out of control.

Beaune, seen as a close ally of President Emmanuel Macron, urged Britain to stop penalising French fishermen for its domestic problems after Brexit.

“Stop telling us you do not need us anymore, stop being obsessed with us, stop believing that we will solve your problems,” he said.

“They made a mess of Brexit. It’s their choice and their failure, not ours. It was a bad choice, we see that today.

“It is not by creating problems for our fishermen… that you will solve the problems of shortages of Christmas turkey,” he said. EU Brexit negotiator Michel Barnier had “negotiated the fact that we have an energy export deal, which means we can regulate the flows”, Beaune said, calling that option “a political possibility”.

But he added: “I hope it doesn’t come to that.”

The minister said France had asked for 450 fishing licences but had only received 275. “We’re 40 percent short, but we insist on those 450,” he said.

“Britons need us to sell their products, including from fishing, they need us for their energy, for their financial services and for their research centres,” Beaune said.

“All of this gives us pressure points. We have the means to modulate the degree of our cooperation, to reduce it, if Britain does not implement the agreement,” he said.

Jersey on Thursday called France’s threat to cut power to the British crown dependency over fishing rights “unacceptable” and said it was unlikely to be carried out.

The threat was “disproportionate” and “unacceptable” and violated Britain’s post-Brexit treaty with the European Union, Jersey’s Minister for External Relations Ian Gorst told reporters via videolink.

Gorst said such a move would deprive 108,000 islanders of power, as well as Jersey’s hospital and schools.

“I do not believe therefore it will happen,” he said.

But should France carry out the threat after all, “we do have contingencies in place”, he said.

Fishing rights for EU boats in UK waters were a key stumbling block to negotiations for a post-Brexit trade accord between London and Brussels after Britain’s exit from the bloc on January 1st, 2021.

The dispute flared in May when a flotilla of around 50 French trawlers massed in front of the Saint Helier harbour on Jersey, a self-governing territory that along with fellow crown dependency Guernsey depends on Britain for its defence.

The protest sparked a tense standoff that even drew in French and British military vessels.

Since then, French fishermen have applied for the new access licences but complain of onerous paperwork and a requirement to prove they had fished in British and Jersey waters before Brexit, not always an easy task, especially for smaller boats.

Last week, Britain said it would grant just 12 out of 47 applications for new licences for small EU boats, while Jersey issued 64 full and 31 temporary licences but refused 75 applications.

“We’ve done everything we can to enable licenses to be issued to those vessels who can prove they’ve fished in our waters and we continue to do so,” Gorst said.