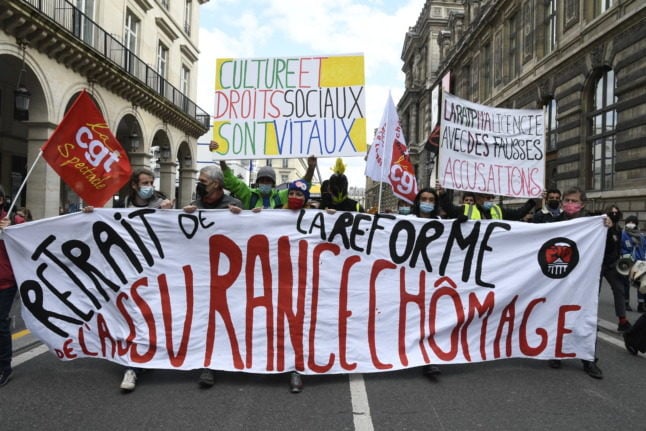 Protesters demand the 'withdrawal of the unemployment insurance reform' in Paris on March 26th. French workers will once again protest the reform on October 5th. Photo: Bertrand GUAY / AFP.

Who is going on strike?

A number of leading French trade unions including the CGT, FO, Solidaires and the FSU have called for strikes on Tuesday.

They are calling for all workers across the public and private sectors, as well as students, to down tools.

The CFDT, which has the largest membership of any trade union, has not called on its members to strike.

Why are they striking?

A reform to unemployment benefits appears to have been the trigger for this strike. October 1st marked the implementation of a new system which will likely see unemployed people receive less money from the state.

READ MORE: How unemployment benefits in France are changing in October

Besides scrapping this reform, the unions are demanding a number of measures including:

Speaking on France Inter over the weekend, Philippe Martinez, head of the CGT, suggested that with the presidential election fast approaching, he wanted “social questions to be at the heart of the campaign”.

This view was echoed by the head of the FO, Yves Veyrier, speaking on France 2.

“On October 5th, it is in our interest to send a strong signal,” he said, before making reference to the upcoming electoral process.

“We need workers to mobilise at the moment. We need to have everyone show that we do not intend to let things slide.”

Strike action is certainly one way to shape the agenda and could have an influence on manifesto pledges in the build up to the April 2022 election.

How will this affect me?

200 strike meetings have been convened across the country. You can see if your city will be affected by checking the interactive map at the bottom of this page.

In Paris, a procession will set off from Place de la République at 14h, heading in the direction of Opéra, before finishing at the corner of Rue La Fayette and Rue de la Chaussée d’Antin. Police have yet to confirm road closures but they would appear likely within the 3rd, 9th, 10th and 11th arrondissements on Tuesday afternoon. Traffic may be slower than usual in the rest of the city, depending on the scale of the procession.

Workers from the public transport companies SNCF and RATP will join the strike leading to minor disruption.

The Paris metro and RER will be largely unaffected. However, the T3 tram line will be very disrupted. Bus services in the French capital will be slower than usual.

A number of transport operators in other cities have also warned commuters to expect delays. In Nice, for example, no trams will be running on lines 1, 2 or 3, and two dozen bus routes have also been cancelled.

There will be disruption to certain bus and tram routes in several French cities.

You can find full details here for Grenoble,

If you are planning on travelling on Tuesday it is worth checking the website of the local transportation operator before leaving.