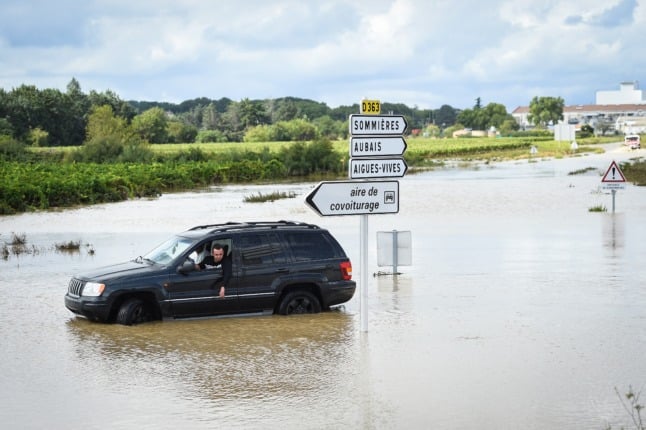 A driver looks at the water flooding a road in the Gard department on September 14th. Illustration photo: Sylvain THOMAS / AFP.

France’s weather agency, Météo France, issued a warning for six départements on Monday. The Bouches-du-Rhône département was on red alert for heavy rain and flooding from 12pm to 6pm, while Vaucluse, Var, Alpes-Maritimes, Alpes-de-Haute-Provence, and Haute-Corse on the island of Corsica were all on orange alert from Monday morning, with the disruption set to last until 9pm.

Speaking to journalists on Monday afternoon, Interior Minister Gérald Darmanin said the worst downpours, which were initially expected at around 1pm, would most likely arrive later in the afternoon.

“We’ve seen, and could still see, the equivalent of several months’ worth of rainfall in the south of France, and clearly the fact the ground is already waterlogged, because it’s already rained, can lead us to believe there will be floods,” he said.

Darmanin said the fire service were ready to intervene, along with helicopters and divers, to protect the population. But he added that there were certain safety measures everybody should adopt: “Don’t go near watercourses, or near the sea; don’t go outside, or delay going out; go upstairs if the area begins to flood, and don’t go near areas where there are electrical installations.”

Between 80 and 120mm of rain was expected to fall throughout the region on Monday, rising to between 150 and 180mm in the eastern part of Bouches-du-Rhône, and even up to 240mm in some areas.

“This turbulent weather could be accompanied by hail and strong gusts of wing,” Météo France wrote.

Educational authorities in Marseille, located in Bouches-du-Rhône on the Mediterranean coast, asked families not to send their children to school on Monday. “Schools will remain open in a reduced capacity to take in those who have no other solution,” the city’s mayor Benoît Payan tweeted.

Later in the morning, the département announced that all schools would close, and invited parents to collect their children, adding that those who could not be picked up would be able to remain in school.

The Var and Alpes-Maritimes départments followed suit by closing schools. “Parents are invited to pick up their children from schools (from pre-school to university) and nurseries across the whole département by noon,” the Var prefecture said in a statement.

Residents were being asked to stay at home, not to evacuate without instruction from the authorities, and not to use their basements.

Aix-Marseille University also announced on Monday morning that the day’s in-person classes would be cancelled due to the bad weather being forecast.

The Marseille Public University Hospital System meanwhile has asked patients to get in touch and reschedule non-urgent consultations, and the Les Terrasses du port shopping centre closed its doors for the day at 1pm.

The weather alert comes after a weekend of torrential downpours in the region. Two months’ worth of rain fell in Marseille on Sunday night and into Monday morning, according to France Bleu. Several streets were flooded, including around the city’s Vieux-Port area, and trains between Marseille and Avignon, Briançon, and Côte d’Azur, were suspended.

According to La Provence, one person died in an accident on the A7 motorway in the region on Monday morning.

Just along the coast to the west, in the Gard département, 3,000 households found themselves with no electricity on Sunday, because of damage caused by heavy rain and fallen trees.

Periods of heavy rainfall are common at this time of year in the south of France, where they are referred to as épisodes cévenols (Cévennes episodes). During these periods, “the Mediterranean Sea is very warm so the water evaporates easily and accumulates in the atmosphere, and when there is atmospheric circulation which brings this water in towards the land, and the Cévennes mountain range, this air cools down and a lot of water falls,” climatologist Françoise Vimeux explained to The Local earlier this year.

The weekend saw unusual levels rain across the country, with 22 départements on orange alert on Sunday morning. The rain caused many of the events organised for Paris’s “sleepless night” to be cancelled, while the west coast was particularly affected. A record 98.3mm of rain fell in Nantes over 24 hours, according to Météo France. Monday’s weather was forecast to be much more calm outside of the south of France.

If you find yourself in danger due to weather disturbances, call 112 to reach the emergency services.