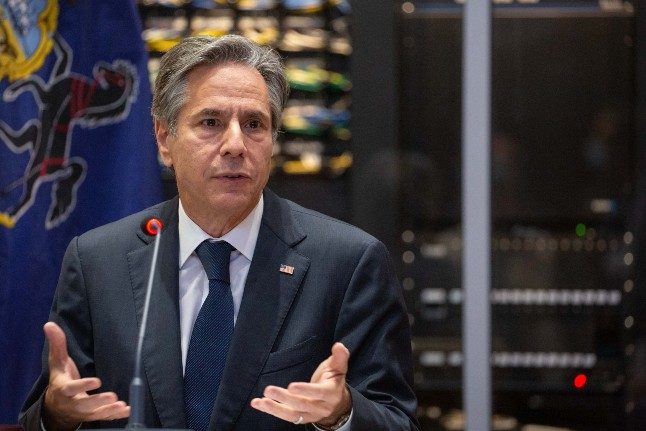 US Secretary of State Antony Blinken speaks to the media after meeting labour leaders in Pittsburgh on September 30, 2021. Photo: Rebecca Droke / POOL / AFP

Blinken will travel to Paris from Monday through Wednesday for a meeting of the OECD club of advanced market economies and also meet French officials, the State Department announced.

Blinken will then fly from Paris to Mexico City for his first trip to the US neighbor as secretary of state, which was already announced by the Mexican government.

France was infuriated last month when Australia canceled a multibillion-dollar deal for French submarines, saying it would pursue US nuclear versions as tensions rise with China.

“We agree that the September 15 announcement would have benefited from better and more open consultation among allies,” said Karen Donfried, the assistant secretary of state for European affairs

“Our meetings in Paris are part of our commitment toward a process of in-depth consultations going forward. We recognize this will take time and will take hard work and it will need to be demonstrated not only in words but also in deeds,” she told reporters.

France accused the United States of betrayal and Australia of back-stabbing and withdrew ambassadors from both countries.

France is still livid with Australia, with a long-planned round of Australia-EU free trade talks postponed.

Australia announced the submarine decision as it joined a new alliance with Britain and the United States, dubbed AUKUS, one of a series of initiatives by Biden as he views a rising China as the paramount concern of the United States in the 21st century.

Amid accusations by Paris pundits that France was collateral damage in Biden’s laser focus on China, US officials assured that Blinken would speak to France, which has Pacific territories, about the Asia strategy.

“AUKUS is not intended to replace existing arrangements or existing partnerships,” Donfried said. “On the contrary, we welcome the opportunity to discuss how to include the EU and other partners in our initiatives around the Indo-Pacific going forward,” she said.

Some Europeans were also concerned by Biden’s decision to pull troops out of Afghanistan, allowing the Taliban to take over. Biden said America’s longest war was a costly distraction from competition with China.

Blinken had already been planning to visit for the 60th anniversary of the Paris-based Organization for Economic Co-operation and Development.

He will co-chair an OECD ministerial that will look at promoting a green economy, a month before high-stakes UN climate talks in Glasgow. China, which has observer status at the OECD, frequently comes under fire from the US for its state-driven trading practices as well as its aggressive lending to developing nations.

“The administration is very interested in engaging like-minded partners and allies to talk about the behaviors of non-market economies including China,” Murray said.