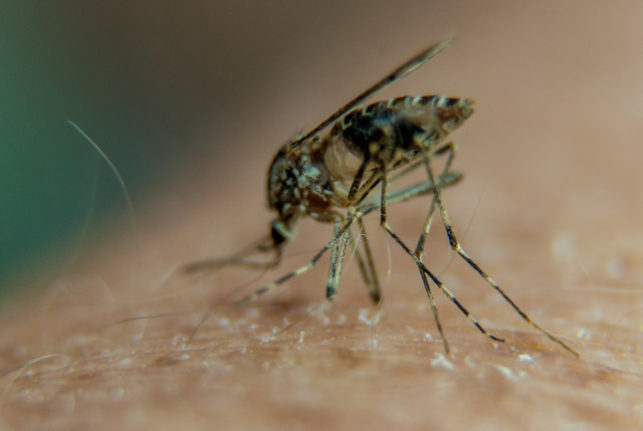 You might have noticed the signs: the faint buzzing in your ear as you’re trying to get to sleep; the itchy spots when you wake up. You might have tried to explain them away, since we don’t expect to be plagued by mosquito bites once summer in France is over, but the truth is the insects are abundant, even as we enter October.

“We’ve had to stop certain training sessions because the kids were getting bitten so much,” an amateur football coach from the Hérault département told 20 Minutes.

The below map, published on Friday, October 1st by tracking website Vigilance Moustiques, shows the areas of France where mosquitoes are particularly present. 12 mainland départements are currently on orange alert for mosquitoes, signalling “unusual levels of bites and proliferation”.

If there are more mosquitoes than usual at this time of the year, experts say it’s a direct result of weather patterns in France. Mosquitoes are attracted to humid areas since their eggs require water to hatch, and it’s safe to say there’s been no shortage of water this year. After a wet summer, many regions experienced heavy storms and record rainfall in September.

“If the water factor is pervasive, there is automatically an increase, and if there is an increase there is reproduction,” entomologist Michel Collin told TF1.

It has been a “remarkable year”, according to the Bas-Rhin’s Syndicat de lutte contre les moustiques (Mosquito Control Association).

“Since May, we’ve had plenty of rain, which has lead to flooding and water taking over the zones will mosquitoes go to lay their eggs when there is no water. Once the site is flooded, the larvae will grow,” Isabelle Bender of the Association told France Bleu.

What you can do

There are a few things you can do to prevent mosquitoes from breading near your property. The first is to eliminate stagnant water, meaning clearing water away from any patio furniture after it rains and regularly clearing things like bird baths. There are also natural methods to kill mosquito larvae, including using vegetable oil.

If you’re afraid of being bitten outside, many pharmacies sell mosquito-repellent bracelets.

But local authorities have also taken more drastic measures. Along the Mediterranean in September, mosquito eradication authorities covered 3,500 hectares of land with organic insecticide, from the Spanish border to the Bouches-du-Rhône, by plane and from the ground.

Health authorities are also closely monitoring the spread of the tiger mosquito, which can be identified by its black and white stripes and is mainly present in urban areas. According to the ANSES national health agency, tiger mosquitoes are capable of spreading viruses such as dengue, Zika and Chikungunya, although it adds that these viruses are not currently actively circulating in France. The tiger mosquito is most common in the south of France at present, and you are encouraged to report any sightings on the dedicated platform here.