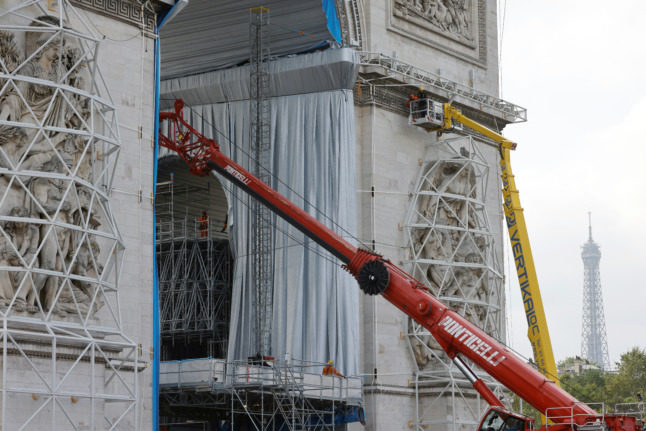 The Arc de Triomphe being prepared before the wrapping of the monument on August 31st. Photo: Ludovic MARIN / AFP.

The imposing war memorial has been wrapped in 25,000 square metres of silver-blue recyclable polypropylene.

It is the signature of Bulgarian-born artist Christo, who died last year, and his wife and collaborator Jeanne-Claude.

They had dreamt of sheathing the monument since renting a nearby apartment in the 1960s, but neither lived to see their strange vision come to life.

“We spare a thought for Christo and Jeanne-Claude,” said Macron as he inaugurated the artwork from atop the monument.

“They would have been moved since it is the culmination of a 60-year dream,” the president said.

He was flanked by Paris mayor (and rival for the presidency next year) Anne Hidalgo, as well as former New York mayor Michael Bloomberg.

Christo wrapped several major public works during his lifetime, including the oldest bridge in Paris in 1985 and the German parliament in 1995.

The completion of his vision for France’s iconic Arc has been overseen by his nephew Vladimir Javacheff in coordination with the Pompidou museum and French authorities.

“It was a crazy dream and you have accomplished it, Vladimir. We give you infinite thanks,” said Macron.

Protective barriers will be removed on Saturday, allowing the public to get up close to the transformed monument. The wrapping will then stay in place until October 3.

“Christo always said the hardest part is getting the permissions,” Javacheff told reporters with a smile. “When you realise that this is really alive, for me and for my team, when you realise this fragility, this beauty, it is quite amazing.”

Not everyone has welcomed the project. Architect Carlo Ratti, a friend of Christo, wrote last week that it was wrong to waste so much fabric at a time when the fashion industry was responsible for such high levels of carbon emissions.

Javacheff countered that the entire fabric is recyclable, along with half the metal used for scaffolding.

Culture Minister Roselyne Bachelot called it “a posthumous testament to an artistic genius” and “a wonderful gift to Parisians, to the French, and to all art-lovers.”

For Christo, who left sketches and photo montages of his plans, the vision was that the Arc would become “like a living object stimulated by the wind and reflecting the light”.

The monument was built by Napoleon to commemorate fallen soldiers during his military campaigns. It was recently restored after being defaced by anti-government “yellow vest” protesters in December 2018.

Born in 1935, Christo left his home country in 1957, living in several countries before arriving in Paris, where he met his future wife Jeanne-Claude. He died of natural causes at his home in New York in May last year.