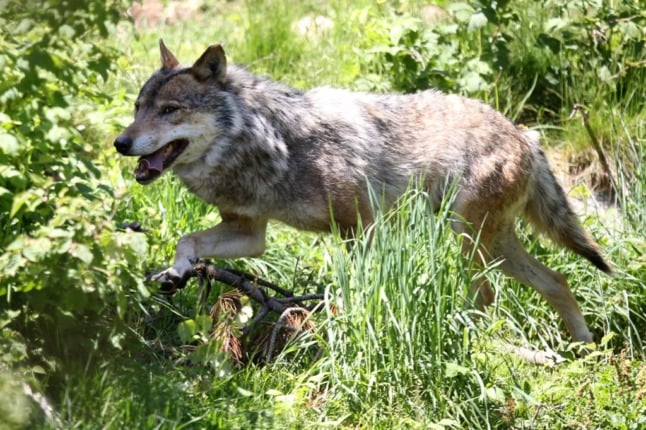 One of my first pieces of reportage when I came to France in 1997 was about wolves. They had crossed the frontier from Italy in 1992-3. They were spreading rapidly throughout the French Alps.

Twenty-four years later, Canis lupus is at my door – literally. A grey wolf was seen a couple of weeks ago near Domfront in the Orne département in lower Normandy. I live 50 kilometres north of there in the Calvados hills. That is scarcely more than a day’s hike for a lone wolf looking for a mate or a snack.

Who is afraid of the big bad wolf? Not me. Not really. I find the prospect of living in wolf-country rather exciting. We have plenty of mammal-life in my part of Calvados – wild-boar, fallow-deer, badgers, otters, foxes, hares, hedgehogs. But wolves! That promotes us to a whole new category of wild and romantic.

MAP: Where in France do wolves live?

Actually it doesn’t. In the last three decades wolves have spread into, or through, all but a dozen of the 90-odd départements of metropolitan France. They have crossed rivers, motorways and TGV lines. They have circled around Paris. They have colonised the Alps, the Jura, the Vosges and Massif Central, the Ardennes, parts of Languédoc and two départements in Brittany.

Their numbers are not huge – 624 adults in 106 packs according to the French government’s biodiversity agency. But the population is increasing by 7 to 9 percent annually – despite the deaths of at least 200 French wolves each year in official culls, illegal hunts and road and rail accidents.

Calvados is, in fact, one of the last départements to have resisted the re-wolfing of France. They will be here soon. The countryside around me is better suited to modern wolves than other places that they have inspected, passed through or colonised in the last quarter century. A shepherd wearing a T-shirt reading “No to wolves” in Prevencheres, southern France. Photo by Pascal GUYOT / AFP

We have hills. We have forests. And our farmers have in recent years gone over in a modest way from dairy cattle to sheep.

Wolves and sheep do not go together well. There were 3,700 wolf reported attacks on flocks of sheep in France last year – roughly 30 attacks for each wolf pack. Some of these incidents probably involved wild dogs rather than wolves – but not many.

The wolf is a protected species under the Berne convention and European law. It can no longer be hunted or poisoned – as it was to extinction in France in the early 20th century (and in Britain in the 18th century).

Farmers are only allowed to shoot wolves if their sheep are actually under attack. The government – which now has a wolf monitoring agency – organises small, official culls each year.

There are also large subsidies from Paris for the building of electrified wolf-defences and the breeding and training of wolf dogs, mostly the deceptively cuddly-looking Patou breed. A Patou dog guards a flock of sheep near Fanjeaux in southern France. Photo by ERIC CABANIS / AFP

Some French shepherds have reluctantly embraced this new world.  In mountain areas where sheep are protected in this way, wolf attacks have become rare. The number of wolf attacks nationally is stable, even though wolf numbers are rising.

Other farmers, especially in lowland areas, are still crying wolf. In 2013, I visite Bar-sur-Aube on the edge of the Champagne-growing country where wolves had appeared for the first time in more than a century.

Jean-Baptiste Schreiner, whose sheep had been attacked, told me: “No one expected ever to see wolves here again. In the mountains, or in the forests, maybe, but this is flatter country, farming country.”

“There are things you can do to protect sheep. But do we really want a French countryside full of savage dogs and two-metre-high electric fences?”

Put that way, I’m not so sure that I welcome the advance of the wolf after all.

Wolves spread naturally. They rarely gather in large packs – usually consisting of 4 or 5 adults, rarely more than ten. Each year, the young adults, the previous year’s pups, leave the pack to seek mates and food elsewhere.

This phenomenon, known as “dispersion”, explains the confirmed presence of wolves in so many French départements in the last decade. They are mostly passing through, looking for prey and other wolves with which to breed.

Only when they reach the kind of country that they favour do they settle down into permanent packs. This country does not have to be mountains and forests. There are now wolf packs in low-lying Brittany and Picardy (but not yet in most of the French Pyrenees).

Pierre Athanaze, president of a French wildlife defence group, Association pour la Protection des Animaux Sauvages (Aspas) says: “None of this should be surprising or scaring.

“The wolf is a lowland animal, an animal of the plains. In Italy, they live in the flatland around Florence, without causing any problem. The same is true in Spain.”

Maybe. I find myself unable to have a clear and fixed opinion on wolves. I believe their return is good and inevitable. I also understand why farmers – already beset by so many other problems – are terrified of them.

In any case, the advance of the wolf through France – 1,200 kilometres in less than 30 years – is almost complete. The Channel coast is only another 100 kilometres away – perhaps less. Wolves have also been spotted recently in the forests of the Bray region near Dieppe.

Resourceful and determined as they are, the wolves can go no further. They are unlikely to climb aboard rubber dinghies and set sail for Sussex or Hampshire.