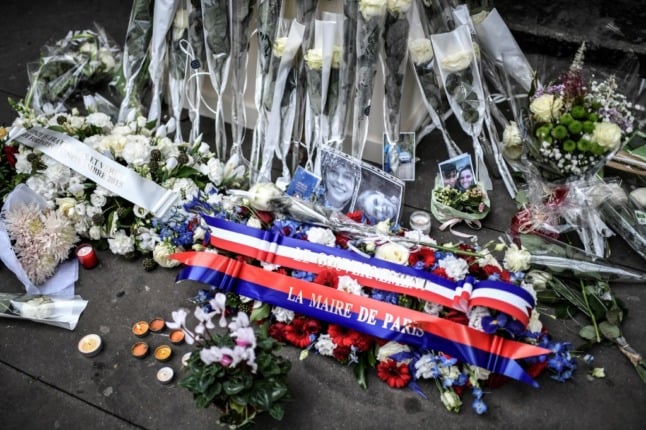 It was France’s worst post-war atrocity, a combined suicide-bombing and gun assault carried out by three teams of jihadists and planned in Syria.

Here’s what happened on that mild Friday evening in November.

The attack began at France’s national stadium, the Stade de France in the northern suburbs of the city.

Then-president François Hollande was among the crowd watching a football friendly in which France took on Germany.

Between 9.20pm and 9.52pm, three suicide bombers blow themselves up at the gates to the stadium.

Hollande, one of the 80,000-strong crowd watching the match, was discreetly evacuated from the stadium to avoid triggering a mass panic among supporters, most of whom were initially unaware of what had happened.

As the explosions went off at the Stade de France, gunmen opened fire in the trendy 10th and 11th arrondissements of Paris.

The unusually warm night saw many people sitting outside on café terraces enjoying meals and drinks.

A group of black-clad gunmen riding in a black Seat car sprayed bullets at the terraces.

In a deadly half-hour 39 people were gunned down by assault rifles.

Le Petit Cambodge restaurant and Carillon bar near Saint-Martin canal were the first to come under attack at 9.25 pm, followed by the Bonne Bière café, the Casa Nostra pizzeria and the Belle Equipe restaurant.

At another bar, Le Comptoir Voltaire, one of the gunmen blew himself up, but no one else was killed.

Two kilometres away at the Bataclan music hall, a 1,500-strong crowd were enjoying a concert by American rock group Eagles of Death Metal.

At 9.40pm a black Volkswagen Polo with Belgian number plates drew up outside the venue. Three men got out, guns in their hands and wearing explosives belts.

The song Kiss the Devil was in full flow when the gunmen broke into the main hall and started shooting into the crowd.

Shortly before 10pm a police officer entered the building and fired at one of the gunmen who had remained downstairs, blowing up his suicide device.

The two other gunmen were holding hostage a dozen people upstairs, telling them they were from the Islamic State group.

Both gunmen were killed when elite security forces put an end to the assault at 12.18am. One of the men blew himself up while the other was shot dead.

As Islamic State claimed responsibility for the attack and Hollande addressed the nation on TV, saying simply: “It is a horror”, police began a massive manhunt to track down the attackers who were still at large.

After four days of police activity, the two surviving café attackers were tracked down in Saint-Denis, a suburb to the north of Paris, on November 18th. Both died in the ensuing police shootout – one was shot and the other blew himself up. Abdelhamid Abaaoud, a Belgian national and the suspected mastermind of the attacks, was one of the two.

Four months later the only surviving attacker, Salah Abdeslam, was arrested in Brussels in March 2016. He was found hiding in a building close to his family home. His role in the attacks is still unclear, but he is believed to have driven the Stade de France attackers. Police also believe he was originally intended to take part in another attack in the north of the city, which never happened.

A trial of 20 suspects began in Paris on September 8th, 2021. Thirteen of the defendants are present in court with the other six tried in abstentia – five of them are believed to have been killed in airstrikes in Syria over the past seven years while the sixth is in a Turkish prison.

Only one of the attackers is still alive – Belgian-born Salah Abdeslam. The other nine attackers either detonated their explosive belts or were killed by police.

The others are charged with either being involved in the planning of the attacks, aiding the attackers or providing weapons, or helping Abdeslam while he was on the run from the police.

Over the course of the trial, nearly 1,800 victims, either injured or witnesses to the carnage that night, or who lost loved ones, will be present. The trial is expected o last until May 2022.