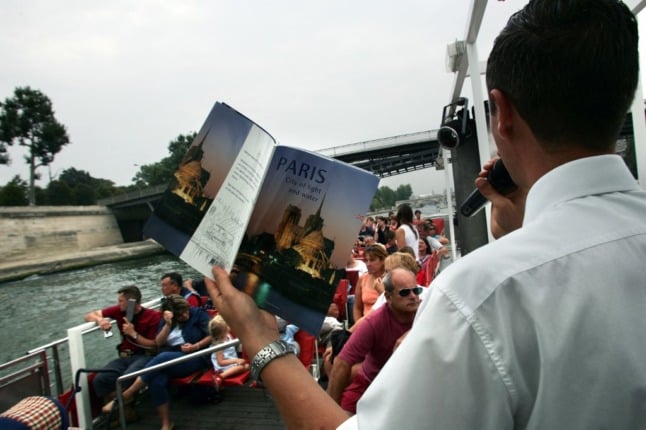 All tour guides have their favourite pieces of 'history'. Photo: Jean-Pierre Muller/AFP

The recipe for a good story from French history became clear: sex scandals, vice and violence. We used to call it the Game of Thrones formula.

We cut it fast and loose with the truth. We gave the people what they wanted.

Here are some of my favourite ‘facts’ from my time spent working as a Paris tour guide: A painting of the Martyrdom of Saint Denis on display in the Panthéon. Photo: The Local

Saint Denis is the patron saint of France. There are statues of him at several historic sites – including Notre Dame and Les Invalides.

Saint Denis was the very first Bishop of Paris in approximately 250 AD. An incredibly charismatic preacher, Denis built up a significant following in the otherwise pagan society.

Before long, the power went to his head. He encouraged his supporters to smash statues of Roman Gods, considering them ‘idols’.

The Romans were pissed. They took Denis to Montmartre, an area of Paris whose name can literally be translated to ‘mountain of the martyrs’, and decapitated him.

As a man of God, Denis didn’t let this set-back get to him. As blood spurted from his neck Denis slowly rose to his knees, picked up his severed head and attempted to walk back into the centre of town to meet his congregation.

Understandably disorientated by the loss of his head, he lost his way and accidently marched north, eventually collapsing in a suburb outside of Paris. Today this suburb bears his name: Saint-Denis.

You may have heard of The Sun King – a nickname given to Louis XIV.

But have you heard of the ‘Fun King’ – a nickname that tour guides have subsequently bestowed upon Louis XV?

Most French monarchs lived wild lifestyles. There was the hunting, lavish spending and partying. But never had there been such a promiscuous playboy at the helm.

Louis XV was rumoured to have hosted wild sex parties and kept a harem of hundreds of women. We know that he certainly had several mistresses.

It should come as no surprise that he eventually contracted syphilis (which the British used to refer to as ‘the French disease’). Without basic antibiotics, this was essentially a death sentence.

The Fun King’s advisors told him to build a church to demonstrate his devotion to God. This, he was told, could bring salvation.

And so, the Fun King hurriedly commissioned the construction of the Church of Saint-Genevieve (today, the building is known as Le Panthéon).

During its construction, Louis XV’s symptoms died down. Failing to realise that the symptoms of syphilis appear intermittently, he told the workmen not to rush.

Eventually the symptoms came back, the Fun King got sick again and by the time he died, the church was still incomplete.

The great resting place of the heroes of France was once a shoddy tribute to one man’s sexual promiscuity. The Panthéon, the secular temple of France. Photo by CHRISTIAN HARTMANN / POOL / AFP

Talking of promiscuity, when the famous writer Victor Hugo died in 1885, all the brothels in Paris closed for 24 hours, out of respect for one of their greatest customers.

Hugo’s spirit lived on even after his death. His funeral turned into a massive party, reportedly leading to a baby boom in Paris some months later.

One of his most famous works, The Hunchback of Notre Dame, inspired massive renovation works on the cathedral.

The architect charged with the task reportedly carved one of the gargoyles to resemble his mother-in-law.

As much as The Simpson’s may have engrained the image of the ‘cheese-eating surrender monkey’ into popular culture, the French military was arguably the strongest in the world for much of Napoleon’s reign.

The diminutive emperor was a graduate of the Ecole Militaire, still one of Europe’s leading military training facilities which has also spawned elite leaders like Commander Joffre and Charles De Gaulle, all of whom made the country proud.

Today it is essentially a finishing school for the crème de la crème of the French military establishment. It is fully equipped with cutting-edge technology and the latest strategic deployment material.

Officers learn the latest in counter insurgency tactics, intelligence and perhaps most importantly – how to lift up and then wave around the white flag. The Eiffel Tower – not loved by everyone. Photo by Sameer Al-DOUMY / AFP

Today it is the undisputed symbol of Paris, but many of the city’s cultural elite were viciously opposed to the construction of the Eiffel Tower (part of an ongoing theme as both Sacré-Ceour cathedral and the Louvre’s iconic pyramid were also the subject of fierce protests).

Opponents of the Eiffel Tower thought it was ugly and at risk of falling over and crushing unsuspecting residents below.

One of the leading critics was writer Guy de Maupassant, who penned petitions, newspaper columns and even books lambasting the giant metal structure.

Once construction was completed, a friend begged de Maupassant to climb the tower. At first he complained. But eventually he was persuaded.

The pair ate a fine meal of lobster and wine gazing down on the sprawling metropolis below.

After that, de Maupassant visited the same restaurant every day for the rest of his life. Many years later, when the writer was drawing his final breaths, the friend asked him: “So you changed your mind about the tower then?”

De Maupassant replied: “I never changed my mind. I only visited because it is the one place in Paris where I don’t have a view of the fucking thing.”

(Actually there are loads of places in Paris where you can’t see the Tower, he could have just moved to the suburbs, but that would have been a less good story). Adolf Hitler looking at a tiara and a sculpture of his hero Napoleon Bonaparte. Photo: FRANCE PRESSE VOIR / AFP

Napoleon was average height for a man of his time (1.68 metres or 5ft 6ins, roughly the same height as Tom Cruise).

His ashes lie inside an urn, inside a series of coffins, each larger than the next, inside the church at the back of Les Invalides.

To see the coffin, visitors must climb the stairs to a raised platform. It is said that Napoleon was such a great man that even in death, he wanted people to bow down to see him.

One visitor to the coffin didn’t want to follow the rules though. Apparently, when Adolf Hitler went to visit the tomb in 1940 (Napoleon was a great hero of his), he ordered his SS guards to hold up mirrors. This meant that Hitler could look up and see the reflection of the coffin over his shoulder.

Those ashes are not all that remains of Napoleon’s body.

When he died in exile on the island of Saint-Helena, the doctor tending to the body cut his penis off (he did at least wait until he was dead).

Napoleon’s penis changed hands many times in the subsequence centuries. Most recently, it was purchased by an American urologist in the 1970s for $3,000 (€2,500).