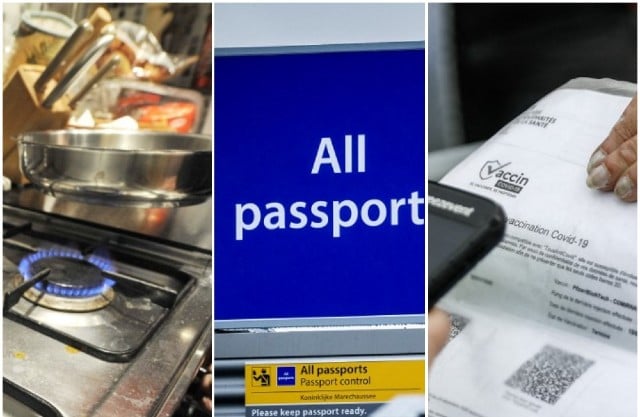 The new school year starts on Thursday, September 2nd, while universities start their new academic year later in the month. Both schools and universities have a strict health protocol in place, but both will begin the year with full in-person teaching. Health passports will not be required and while vaccine centres will be set up for both school pupils and students, vaccines will not be compulsory for either pupils or teachers.

La rentrée means more than just schools going back though, it’s when a large chunk of the French workforce returns from holidays, while parliament and the business of government resumes in earnest.

The health passport is already in place for most people, with proof of either vaccination, recent recovery from Covid or a negative test required to enter a range of venues, including cafés, bars, sports stadiums, museums and hospitals – find the full list HERE.

However, there had been a couple of exemptions which will end in September. From September 1st the health passport will be required for employees at health pass venues, as well as visitors. For staff members this more or less amounts to compulsory vaccination, unless they are willing to take a Covid test every three days. From October ‘convenience tests’ will also cease to be free.

At present the health passport is required only for over-18s, but that changes on September 30th, when it will be required for over 12s. France has been vaccinating its teenagers since June, but for visitors from countries that are not yet vaccinating under-18s this could present a problem.

Vaccinations are compulsory for healthcare workers – this covers all workers in the health or care sector, as well as volunteers working in those sectors.

France will begin giving a third dose of the vaccine to high risk groups in September.

Bookings open on August 30th for the first appointments from September 1st for people aged 65 or over or in a high-risk group.

From September 13th a third vaccination campaign will begin in Ehpad nursing homes.

Reader question: How can I get my Covid booster shot?

UK nationals who were living in France before December 31st 2020 have until September 30th to apply for a carte de séjour residency permit. This deadline has already been extended once (from June 30th) so is unlikely to be extended again. Brits who fail to apply for the residency card in time become undocumented migrants, so this is a very important date to know about and tell any Brits that you know.

You can find out how to make the application HERE.

September 30th also marks the day that national ID cards will no longer be accepted for travel into the UK. So if you are travelling to the UK with French partner, friend or relative, remind them that they will need a passport after this date.

The hunting season in France opens in September – exact start dates vary between areas but it begins from September 12th. For more details on the hunting calendar and how to stay safe in rural areas when la chasse is about, click here.

Discussions restart between the government and unions on pension reform in September. At issue are major changes to the French pension system, a highly controversial topic which lead to almost two months of transport strikes back in December 2019 and January 2020. In the face of determined protest some of the original proposals have been changed, and Macron has also vowed not to implement big changes while the economic effects of the pandemic are still being felt (which is likely to mean they don’t come into effect before the presidential election in April 2022).

If you benefit from tickets restos through your work, you can continue to use old ones. September 1st was originally the deadline for all vouchers received in 2020 to be used by, however the government has decided to extend this until February 2022, because the health situation has meant that many people were not in a position to use up their unspent vouchers. The maximum spend per meal will also remain at €38, before going back to the usual limit of €19 in February.

Tariffs for household gas will rise on September 1st. The increase will be 2.7 percent for households which use gas for cooking, 5.5 percent for those who have dual use, cooking and hot water, and 9 percent for households that have gas central heating, the energy regulator has announced. An unprecedented single-month increase, the price hike was blamed on a global rise in gas prices linked to the economic recovery after the pandemic.

No change to medical costs

A new fee for emergency medical treatment in France was due to be introduced on September 1st, but has now been postponed until 2022 – find out about how it works here.

For any employees who are still on chômage partiel (furlough) as a result of the pandemic, the proportion of their salary that the government reimburses falls from September 1st. From a previous rate of 72 percent of their gross monthly salary, this falls to 60 percent. The government has also reduced the rate paid to companies affected.

Any students studying at a lycée (high school) in the next academic year are entitled to apply for a bourse (grant) to help with the cost of studying. The grant varies depending on the level of study and the income of the student or their parents up to a maximum of €936 and is paid in three installments throughout the year. Applications for the grant can be done online from September 2nd to October 21st.

Employees now have income tax deducted straight from their salary at source, and the yearly rate for this is set on September 1st. If your personal circumstances have changed – eg you got married, divorced or had a baby – you need to tell the tax office about this immediately so they can calculate your new rate. If nothing has changed, or if you informed the tax office of the change in your most recent tax declaration, then you don’t need to do anything.

From September 1st, the French labour ministry is no longer officially advising people to have a minimum number of days of télétravail (home-working).

Previously the government had recommended that employees split their time between home and office work if possible, with a minimum of two days per week working remotely – although this was always a recommendation and not a rule. This guidance has now ended, and it is between employees and their employers to decide on télétravail days. Health guidelines remain in place in workplaces, however, including masks indoors, ventilation guidelines and limits on coffee breaks and after-work drinks.

The price of a packet of 20 Lucky Strike bleu et rouge, News Rouge and Gauloises Blonde bleu will fall by 10 cents to €9.90 a pack from September 1st. Camel is also lowering its prices by 10 cents, to a round €10 per pack of 20.

Monthly subscription costs for Netflix are rising, both for existing subscribers and for new members. The monthly cost of the basic package goes up by €1 to €8.99 a month.

The section of the AP-7 highway leading from Le Boulou in south west France to Barcelona will become free for all motorists in September, although the exact date is yet to be confirmed. The motorway, one of the busiest in Europe, is dropping its toll charges in line with many other Spanish autoroutes. Charges on French highways will remain in place.