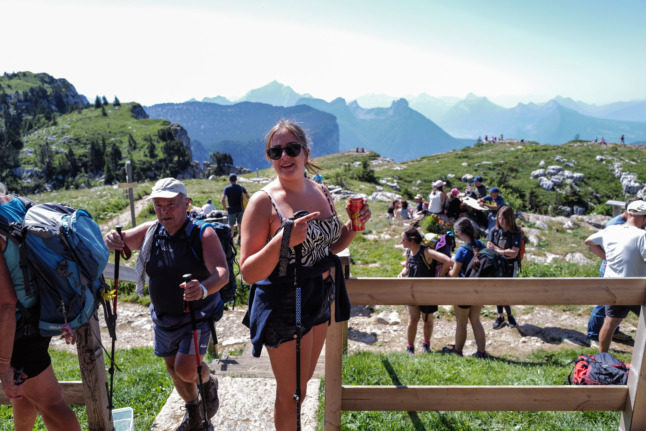 The European digital health pass was introduced on July 1st, making it easier for fully vaccinated EU residents to travel across the continent, and France’s airports and holiday destinations are already seeing the fruits of that project.

“We were at a 79.6 percent fall in traffic in the first trimester of 2021, compared to the same period in 2019, then 77 percent less in the second trimester” Thomas Juin, president of the Union des Aéroports Français told the newspaper.

“We are at 50 percent less in July. The current bounce is encouraging, but we should be cautious, this recovery is above all a reduction in the downturn.”

According to a special report by Le Parisien, Paris Beauvais Airport reached 80 percent of its 2019 passenger numbers between August 1st and 13th, up from 70 percent in July. Ryanair even opened six new lines departing from the airport this summer, to destinations including Corfu, Ibiza and Naples.

Over at Charles de Gaulle, the country’s largest airport, only half of the terminals are open, but in those that are, traffic has peaked at around 70 percent of 2019 levels.

The call of the wild

The tourism industry has also been boosted by the large numbers of French people opting against travelling abroad. Mountain regions are among the big winners, with people looking for a relaxing break away from the crowds.

“The three winners are the coast, the mountains and the countryside. The big losers are urban areas, even if they have progressed slightly compared to last year,” Christophe Marchais, Deputy Managing Director of ADN Tourisme, a federation of local tourist boards, told The Local.

“Activities which continue to be very popular, even compared to last year, are everything related to hiking and bicycle touring. Sellers of hiking equipment like shoes have been besieged with demand.”

Initial figures from the Association Nationale des Maires des Stations de Montagne (National Association of Mayors of Mountain Resorts) and G2A Consulting show that holiday accommodation occupancy rates were up by 9 percent across France’s different mountain ranges in July compared to last year. Occupancy rose by 24 percent in the Pyrenees.

In the Isère département in south-eastern France, 3 million overnight stays were booked for July, 6 percent more than last year according to a report from the local tourist board, and just 7 percent down compared from the pre-pandemic year of 2019.

However, the report also highlights the negative impact of the fourth wave of Covid cases as well as poor weather and competition from destinations in the south of France and further afield.

There is similar uncertainty in Brittany, where the number of reservations for August has so far been similar to last year. “The rest of the season is difficult to predict, with last-minute reservations and an expanded health pass from August,” a report from the local tourism board warns.

Much of the demand has been driven by French people hoping to discover their own country, while the introduction of the European health passport has also had an impact.

READ ALSO How tourists can use France’s health passport to access museums, cafés and trains

“The other trend is the lack of non-European clients – Brits, but also Americans and Asians,” Marchais said.

“On the other hand, European clients are present in large numbers – Dutch, Belgians, Germans, and then also some Italian and Spanish.”

In Isère, 40 percent of visitors in July came from the surrounding Auvergne Rhône-Alpes region, while “the Dutch and Belgians made a noticeable return to mountain resorts over the month”, according to the tourist board.

In the nearby Ardèche département, Dutch and Belgian tourists made up the majority of foreign reservations for overnight stays (38 percent and 37 percent respectively), while Brits were responsible for just 2 percent of bookings. French tourists also booked 9 percent more overnight stays than in 2020.

In May 2021, revenues generated from international tourism were up 62.5 percent on May 2020, but down 60.7 percent compared to 2019, according to Atout France, the France Tourism Development Agency.

One group that has been notable in their absence this summer has been British tourists – until August 8th, all Brits returning from France had to quarantine for ten days upon arrival in England and pay for expensive testing once home.

“The announcement came far, far too late to save our summer season,” Nigel Wonnacott, head of external communications at Brittany Ferries, told The Local. “We’ll be lucky to carry a quarter of our normal passenger numbers this year (across all routes).”

The number of weekly bookings rose 82 percent following the UK’s decision to drop quarantine requirements for fully vaccinated travellers from France – “a drop in the ocean compared to the number of passengers we should be carrying at this time of the year.”

“This year’s reservations will be worse than last year,” Wonnacott added. “By how much, time will tell.”