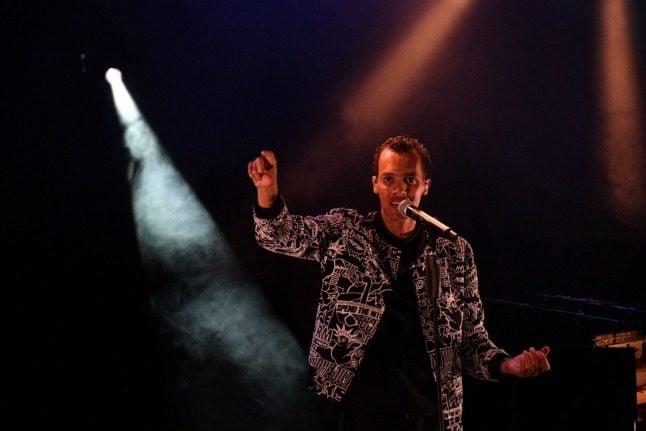 Even if you struggle to understand the lyrics, listening to their songs and being immersed in the French language can have a positive effect on your development.

The following artists all speak clearly and put a great emphasis on their lyrics.

The chanson française genre of music, particularly popular songs released between the 1960s and 1980s, is especially great for French learners. That’s because French performers have a wonderful tradition of creating lyrical, poetic songs that tell a story and aim for the heart.

Christophe is not the most well-known of these outside of France, but his music is a great resource, especially for beginners, because he sings slowly and clearly, using simple but accurate grammatical structures.

His song “Aline” will even teach you the subjunctive: “Et j’ai crié, crié ‘Aline!’ pour qu’elle revienne” (And I yelled, yelled ‘Aline’ so she’d return). And just look at that moustache.

(And if you prefer your French with a slight Sheffield accent, check out Jarvis Cocker’s cover of Aline).

Dutronc, who rose to fame in the 1960s, is another who articulates his lyrics very clearly. Start with “Et moi, et moi, et moi” if you want something that’s fairly repetitive and that will teach you a mix of basic and more complex vocabulary.

His lyrics captured the spirit of May ’68, and the song “Il est cinq heures, Paris s’éveille” became an anthem for the student and worker protests. Not only will it make you want to wander the streets of the capital while most people are still asleep, it’ll also teach you lots of vocab. He gives lots of examples to show what Paris is like in the morning – the beautiful and the ugly aspects – all the while sticking to simple sentences and rhymes.

If you need some inspiration, listen to Alex Turner singing Dutronc’s song “Les Cactus” with The Last Shadow Puppets. Now you have no excuse for not learning the lyrics.

The next signer emerged in the same era as Jacques Dutronc, and they also happen to be married.

Françoise Hardy is a favourite of many French teachers, and for good reason. With a voice that could melt butter, Hardy pronounces each word immaculately and it’s oh so French.

“Le Temps de l’Amour” is perfect for learning to differentiate between those ou and u vowel sounds, which are so difficult for foreigners to imitate (in the words amour and aventure, for example, which feature heavily in the song).

“Tous les garçons et les filles” has the melodic qualities of a nursery rhyme, and you’ll be forced to look up the words you don’t know if you want to add lyrics to the tune that’s stuck in your head.

Belgian-born performer Jacques Brel had an undeniable talent for songwriting, and holds an important place in that French-language storytelling tradition.

Some of his songs will send you into a depression, but he also had a humorous streak, so there’s great joy to be had by discovering the subtleties of the lyrics as your level progresses. The song “Vesoul” gives a good example of his sense of humour – it starts off relatively easy to understand, then challenge yourself to keep up with the lyrics as the rhythm accelerates.

More recently, many artists have picked up and continued the French tradition of lyric-driven songs, and pushed it even further. One of the best examples of this is Fauve, a music “collective” active between 2010 and 2015, who described their own work as “spoken word” (using the English term).

Which makes their songs perfect for more advanced French learners. The singer speaks clearly, in full sentences, and it’s a lot closer to poetry than pop music. Even if you don’t understand every word, it’s easy to tune out and enjoy the music while still absorbing the language as if you were at a party listening to somebody tell a story. You might even pick things up without realising.

Another singer from Belgium, Angèle has become one of the most popular artists in both Belgium and France in recent years for her songs and videos which address modern subjects like social media and Balance Ton Porc (the French equivalent of the Me Too movement). Her popularity is such that she even released a song with Dua Lipa.

She uses plenty of informal expressions which are very common in spoken French, as well as a lot of slang – one of her songs is titled “La Thune”, a colloquial term for money.

And a third Belgian artist – what can we say, Francophone Belgians are popular in France – is the chart-topper Stromae.

He’s often described as a rapper but his more recent albums his style is really more for sung lyrics and he’s another one who has nice clear pronunciation.

He often tackles big issues in his lyrics, so as well as learning the language you can also learn something about France and its social concerns.

Check out Santé, from his most recent album Multitude, which celebrates the low-paid, often invisible but absolutely essential workers who kept the country going through the lockdowns.

Bigflo & Oli are a rap duo composed of brothers from Toulouse. Many of their songs tell either fictional or autobiographical stories, and it’s easy to make out what they’re saying so they’ll teach you loads of good vocabulary, as well as giving a great insight into modern France, shaped by their Argentinian and Algerian heritage.

For example, in the track “Rentrez chez vous”, they imagine having to leave France because of war and arriving in another country only to be turned away.

In “Bienvenue chez moi”, they take listeners on a tour of France’s main cities and their distinctive foods, emblems and rivalries.

Their most poetic song is “Je suis”, in which they put themselves in the shoes of the different kinds of people who make up France, from a student who’s told she can’t wear the veil, to someone struggling to make ends meet, and a man who’s worried about immigration.

In a similar style, Gaël Faye is a rapper known for his poetic lyrics. Who better to guide you through the French language than a songwriter who is also an award-winning novelist, having won the prix Goncourt des lycéens for his novel Petit Pays?

More advanced French learners may find joy in taking the time to translate and understand the words to “Paris métèque” (immigrant Paris), Faye’s love-hate ode to the capital.

Another musician who plays around with spoken word and dives deep into French culture. References on the album La Reproduction include May ’68, Charles de Gaulle and New Wave cinema.

Those references are most numerous in the song “France Culture”, during which Fleurent-Didier speaks more than he sings. He also has a song called “Je vais au cinéma”, a phrase which sounds like something out of a secondary school French textbook and, appropriately, the official video for that song has English subtitles.

Canadian singer and pianist Béatrice Martin, who performs under the stage name Cœur de pirate, has been credited with “bringing la chanson française to a whole new generation of Quebec youth”, and the same could be applied to audiences from other parts of the globe.

Listening to her music is a great opportunity to discover the Quebec accent, which is very different to the way people in France speak, but don’t be put off – her songs are relatively easy to understand and at the perfect rhythm for people trying to parse the lyrics. Begin by listening to her self-titled debut album all the way through – it’s perfect for walking or driving, to be immersed in the language without feeling the need to look up or understand every word.

And of course we couldn’t let this end without mentioning the queen of the French chanson, Edith Piaf. Her diction is particularly immaculate but it’s not her own – she shed her working class Parisian accent and learned a more ‘posh’ French pronunciation before she achieved widespread commercial success.

Have any French artists helped you to learn the language? Let us know in the comments below.