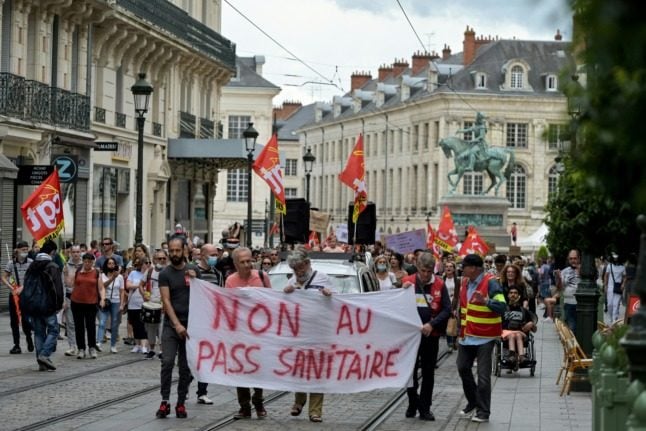 Last weekend, an estimated 160,000 people marched in protests against plans to extend the health pass and the compulsory vaccination of healthcare workers, first announced by President Emmanuel Macron in a televised address on July 12th.

The health pass bill was agreed by MPs, and is now being examined by the influential Conseil Constitutionnel. It will announce its verdict on the law by August 5th.

Ministers expect the extended rules to come into force four days after that decision, from August 9th.

Since the beginning of July, more than 7.75 million first vaccine doses have been administered, according to official figures published on Thursday, July 29th.

But the passage of the bill through Parliament prompted a wave of protests – which will continue this weekend. Some 3,000 police officers will be deployed in Paris alone, where four marches are planned for Saturday. More than 10,000 people are expected to join the four protests in the capital.

The largest march is expected to start at the foot of the Tour Montparnasse, Place du 18 juin 1940, at 2.30pm, and end at Place de Fontenoy at 7pm.

Far-right Presidential candidate Florian Philippot, leader of Les Patriotes, called for the latest protest in the capital, after organising a rally at the Place du Trocadéro last weekend. He will be joined by another hard-right candidate, Nicolas Dupont-Aignan, leader of Debout la France.

Another three marches are planned in the capital. The first will leave from the Place du Palais Royal at 12pm. The procession will take the direction of Place Laroque, where the demonstrators will meet until 7pm.

The second will start from Place Joachim du Bellay at 2pm and end on Place du Palais Royal at 9pm.

A fourth demonstration will begin at the Villiers metro station at 2pm, and will end at 7pm at Place de la Bastille.

There have also been calls on social networks for a march on the Champs-Elysées, leading to fears that a hard core of the so-called yellow vests may be planning to cause trouble.

Protests have also been confirmed in towns and cities across France, as this interactive map shows:

The key marches are at:

Some unauthorised marches could take place in towns and cities, similar to the one in Lyon last weekend, while others have yet to be confirmed.

Since the start of the pandemic in France, Covid-19 has affected more than 6 million people, while 112,000 people have died of the virus.