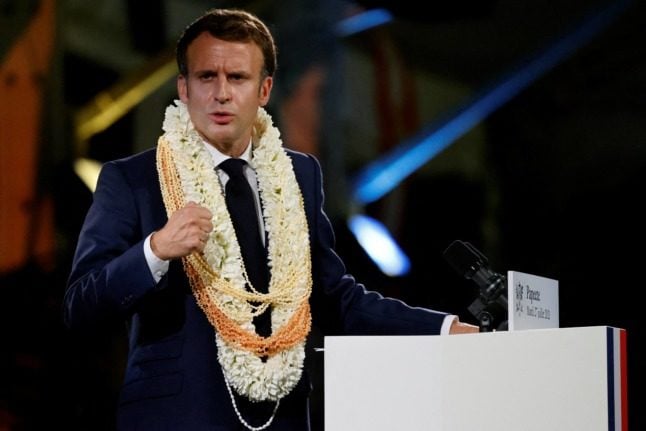 Emmanuel Macron delivers a speech on the final day of his visit in Papeete, French Polynesia. Photo: Ludovic MARIN / AFP.

“I want truth and transparency,” Macron said in a speech to Polynesian officials during his first official trip to the territory, adding that there should be better compensation for victims of the tests.

“The nation owes a debt to French Polynesia. This debt is from having conducted these tests, in particular those between 1966 and 1974.”

The legacy of French testing in the territory remains a source of deep resentment and is seen as evidence of racist colonial attitudes that disregarded the lives of locals.

The tests were conducted from 1966 to 1996 as France developed nuclear weapons.

Officials denied any cover-up of radiation exposure earlier this month after French investigative website Disclose reported in March that the impact from the fallout was far more extensive than authorities had acknowledged, citing declassified French military documents.

Macron echoed the sentiments in his remarks on Tuesday.

“I want to tell you clearly that the military who carried them out did not lie to you. They took the same risks… There were no lies, there were risks that weren’t calculated, including by the military.”

“I think it’s true that we would not have done the same tests in La Creuse or in Brittany,” he said, referring to regions inside France.

Ahead of Macron’s four-day visit, residents in the sprawling archipelago of more than 100 islands located midway between Mexico and Australia were hoping that Macron would apologise and announce compensation for radiation victims.

Only 63 Polynesian civilians have been compensated for radiation exposure since the tests ended in 1996, Disclose said, estimating that more than 100,000 people may have been contaminated in total, with leukaemia, lymphoma and other cancers rife.

“We’re expecting an apology from the president,” Auguste Uebe-Carlson, head of the 193 Association of victims of nuclear tests, said ahead of Macron’s visit.

“Just as he has recognised as a crime the colonisation that took place in Algeria, we also expect him to declare that it was criminal and that it is a form of colonisation linked to nuclear power here in the Pacific.”

Meeting Macron on Tuesday on the island of Moorea, Lena Lenormand, the vice president of the association, renewed the call.

“There are urgent demands, people who are suffering. We’re asking you to own what the state did to these Polynesian people, for an apology and real support,” she told Macron.

“We can’t help but think that you are at the end of your term, so words are one thing, but afterwards, what will be done concretely?” she told Macron.

In response, Macron said he was “committed to changing things” regarding compensation.

“I’ve heard you, and I’ve heard what you are asking of me, and you will see my response.”

In his speech, Macron said that since his election in 2017, there has been progress in compensation claims, but he admitted that it was not enough and said the deadline for filing claims would be extended.