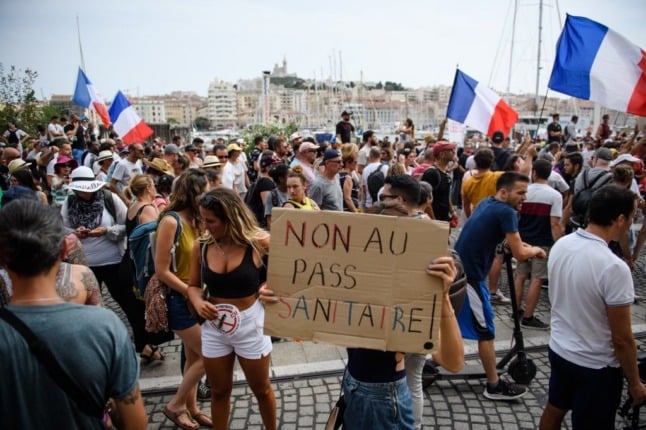 Street protests against the French health pass are continuing – and growing.

Another series of demonstrations nationwide is expected on Saturday, the day before new rules exile the “non-vaccinated” from bars and restaurants.

On the other hand, the French vaccination programme is booming.

The average number of first shots given daily has doubled since President Emmanuel Macron announced two weeks ago that it would become impossible to travel long distances or have much fun in France without being vaccinated or without taking constant – and no longer free – Covid tests.

If Macron’s plan was to force the vax-shy and vax-lazy into the vax-centres, it has been a huge success. In Britain, by comparison, the once once-excellent vaccination programme has all but collapsed. By my reckoning, France (now averaging 330,000 first shots a day) will overtake Britain (averaging 40,000 a day) in the total number of  first vaccinations in about three weeks’ time. A man wears a yellow armband with a star of David reading “not vaccinated” at a demonstration in Nantes. Photo by Sebastien SALOM-GOMIS / AFP

How seriously should we take the anti-pass protests? Is this the beginning of another Gilets Jaunes (yellow vests) movement?

Are the “anti-passers” and the Gilets Jaunes the same people? How much support do they have in the nation as a whole?

There were 160,000 protesters in more than 200 manifs across France last Saturday – a 30 percent increase on the week before. This is about half the number of people who turned out for the first Gilets Jaunes protests in November 2018.

In Paris, there were 11,000 protesters in three separate marches. About 300 people, many of them wearing yellow vests, invaded the Champs Elysées in the evening and were scattered by police water-cannons. Police forces use water canons to disperse protesters on the Champs-Elysées on Saturday. Photo by Alain JOCARD / AFP

In terms of wider support, an opinion poll in the Journal du Dimanche last Sunday suggested that one in three French people – 35 percent of the sample questioned – supported the movement. In the early days of the Gilets Jaunes, popular support was over 70 percent.

One in three sounds a lot. In French terms, it’s fairly feeble. Almost all anti-government protests, whatever the government, whatever the issue, attract at least 50 percent support

According to the IFOP poll for the Journal du Dimanche, support for the anti-passers is heavily concentrated on the hard left (57 percent support) and the hard-right (49 percent) and overlaps to a large degree with the Gilets Jaunes and ex-Gilets Jaunes (67 percent). In other words, it is, in part, an anti-Macron movement supported by the most Macron-hating sections of France.

It is also more than that. Support for the movement among the young is quite strong – 51 percent among 18-to-35s. The people who marched on the last two Saturdays were not all anti-vaxxers or conspiracy theorists (although many were).

The movement is an odd one – even more eclectic than the Gilets Jaunes in their early days. The anti-passers range from the sincere to the selfish, from the apolitical to the very political, from the cynical to the nutty.

There were banners on Saturday which said “masks make children autistic” or “vaccines create variants”. There were also banners saying “pro-vaccine but also pro-liberty”.

A fringe of the movement is violent. Several vaccine centres have been vandalised. One, in a marquee in the western Pyrenees, was burned to the ground. Politicians and pro-vaccine scientists and prominent doctors have received death threats.

Many demonstrators on Saturday again resorted to outrageous comparisons, wearing the yellow stars of David imposed on Jews by the Nazi occupiers of France or suggesting that the health pass was a form of “apartheid.”

This is not just outrageous but stupid. Jews could not choose not to be Jews in 1940-44. Black South Africans could not choose to be white. The fact that they were Jewish or non-white was not a threat to the rest of the population.

On the other hand, some of the people in Saturday’s marches made coherent arguments against Macron’s decision to bring a degree of coercion to French anti-Covid vaccine policy. Macron himself was against coercion until this month, it should be remembered.

To summarise their arguments;

“This is an attack on fundamental liberties…We have a right to decide what to do with our own bodies…This is just the beginning. If we don’t protest now, more freedoms will be eroded…”

“There is some evidence that Covid vaccines are a threat to a tiny minority. Why should young people be vaccinated when Covid is no threat to them?”

“If coercion was not justified before, why is it justified now when so many people are already vaccinated and the new variants are not causing much serious illness/death?”

These arguments are at least rational. They deserve to be addressed. That appears to be the government’s strategy – to separate the reasonable protesters from the cynics and the obsessives.

The counter-argument needs to be heard, more strongly and more clearly than it has so far. As the philosopher Michel Onfray (no fan of Macron’s) points out, to refuse to be vaccinated is not just a personal choice. It effects all of us.

More than a score of vaccines are already compulsory in France. Those rules are also an “attack on personal liberty”. So are the seat-belt and drink-driving laws.

Covid-19 and its progeny will be with us for many months – maybe even for years. The fact that 60 percent of France is now first-vaxxed is good – but not enough. At least 90 percent is probably needed for herd immunity.

The reducing number of deaths and acute illness conceals a vast number of long Covid cases which may leave even young people permanently damaged or diminished.

Should Macron have simply made vaccination compulsory? Maybe. It was, however, a reasonable compromise to say to the non-vaccinated: “It’s your choice to refuse to be protected. It’s our choice not to have to meet you in confined spaces.”

My prediction is that the demonstrations will continue. They may even be somewhat larger this weekend.

The nutters and the diehards and the weekend hobby-protesters will go on indefinitely. The more moderate, sensible protesters will melt away as the peak August holiday season begins.