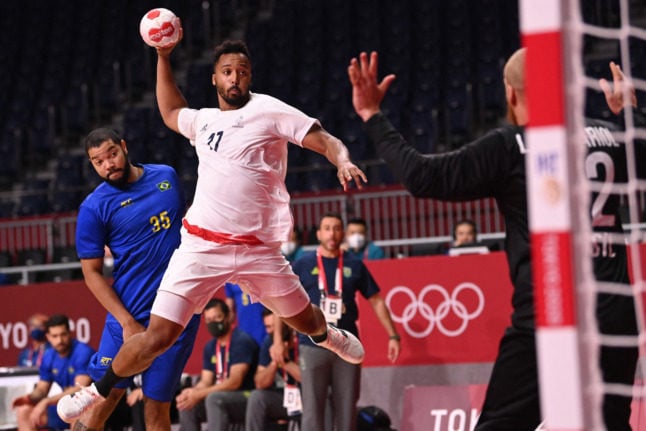 Here are five things you need to know before strapping yourself in to watch the hotly-tipped French teams at the Tokyo Olympics.

1. It’s one of the most popular sports in France

Everybody who is part of a sports club in France must have a licence (permit), which makes it relatively easy to compare the number of people formally participating in different sports using government data.

In 2019, around 492,000 people belonged to a handball club. That made it the sixth most practiced sport in France, behind football, tennis, horse-riding, judo and basketball. It was even more popular than rugby (326,000 licences).

2. The rules are fairly simple

Part of this popularity may stem from the fact that handball is a relatively easy sport to get to grips with. Two thirty-minute halves are played between two teams of seven players.

Once you have received the ball, you are allowed to take up to three steps, and hold onto the ball for three seconds, before having to pass it to a teammate.

You score by throwing the ball into the net. You can shoot from outside the 6-metre zone which surrounds each goal, or you can jump into this goal area, but in that case you have to release the ball before touching the ground.

You are allowed to touch the ball with any part of your body from the knee up, although this restriction does not apply to goalkeepers.

The rules of handball mean that the game is played at a very fast pace. Not only do you have to release the ball after three seconds, but “passive play” is also banned, meaning a team is not allowed to simply throw the ball amongst themselves to run down the clock with no intention of scoring.

It’s also a high-scoring sport – France beat Brazil 34-29 on Monday – making it easy for beginners to become engrossed even before understanding all of the intricacies of the game.

Handball has its origins in northern Europe before spreading to the rest of the continent. According to the Olympics website, “Handball was created and developed in Denmark, Sweden and Germany in the late 19th century”.

And that history is reflected in the medal tables: the Republic of Korea is the only non-European country to win a medal with the men’s team, taking silver in 1988. The Korean women’s team, however, has won six medals, including two golds, since women were first able to compete at the 1976 Olympics.

The United States has competed several times in the past, but has not sent a men’s or women’s team to the Olympics since 1996.

5. France is a powerhouse

Since indoor handball was introduced at the 1972 Summer Olympics in Munich, no country has been more successful in the men’s game than France. The French men took gold in 2008 and 2012, silver in Rio in 2016, and bronze in 1992.

The women’s team has also tasted success, becoming world champions in 2017, and taking the silver medal in the 2016 Olympics.

Both French teams will therefore be hoping to make it all the way in Tokyo.