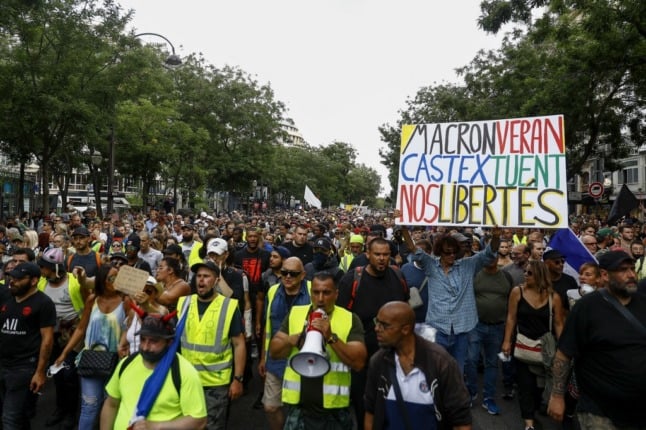 French activist Jean-Baptiste Redde also known as Voltuan holds a sign reading "Macron, Véran, Castex are killing our freedom" during a demonstration against the compulsory vaccination for certain workers and the mandatory use of the health pass called by the French government, in Paris on July 24th, 2021. Since July 21st, people wanting to go in most public spaces in France have to show proof of Covid-19 vaccination or a negative test. (Photo by Sameer Al-DOUMY / AFP)

In France, where police deployed teargas and water cannon against some protesters, an estimated 160,000 took to the streets in nationwide protests against President Emmanuel Macron’s health pass that will drastically curtail access to restaurants and public spaces for unvaccinated people. Demonstrators hold up placards and banners, one of which reads as ‘Macron = Treason’ during a protest against the vaccination and the compulsory health pass called for by the French government, in Toulouse, southwestern France, on July 24th, 2021. (Photo by Fred SCHEIBER / AFP)

The demonstrations highlight the conflict between people caught between the advice of the World Health Organisation and other public health agencies and the need to earn a living — or simply to return to a pre-pandemic lifestyle.

In Indonesia and the UK, governments have pressed ahead with easing of restrictions even in the face of surging case numbers.

In France, as elsewhere in Europe, the government is making it harder for reluctant citizens to put off getting the jabs.

Legislation now being considered by lawmakers will make vaccinations compulsory for certain professions, while the controversial health pass will severely restrict social life for holdouts from the end of July. A mask of French President Emmanuel Macron with “liar, manipulator” written on it is displayed during a demonstration against the compulsory vaccination for certain workers in Paris on July 24th, 2021. (Photo by Sameer Al-DOUMY / AFP)

There were signs the tougher measures announced on July 13th were having the desired effect: 48 percent of the population were fully vaccinated as of Friday, up eight percentage points from July 10.

While more than three-quarters of French people backed Macron’s measures, according to a July 13th Elabe poll for BFMTV, a sizeable and vocal minority do not.

Elodie, 34, a care assistant at a Strasbourg nursing home, denounced “the blackmail of caregivers who were at the front line” during the first wave and who are now threatened” with “no more pay” and even being fired.

“They’ve been lying to us since the beginning,” she said.

Protests also took place in Italy, with protesters gathering in Rome to demonstrate against a mandatory “green pass” for indoor dining and entertainment. 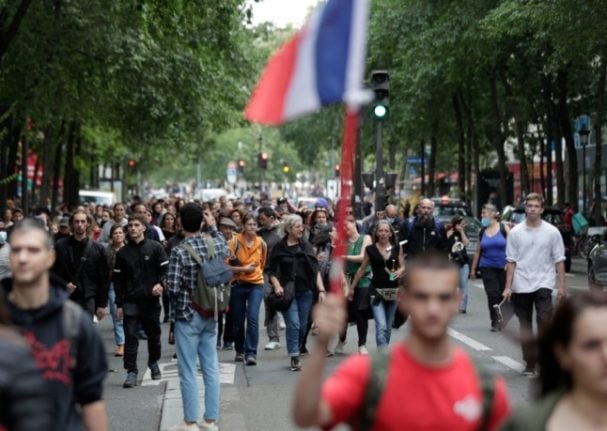 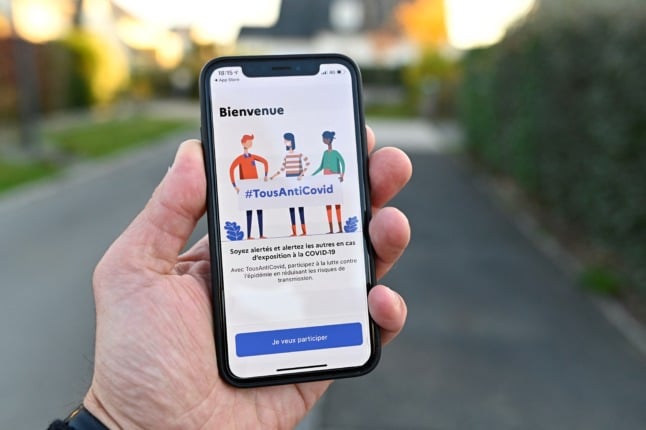