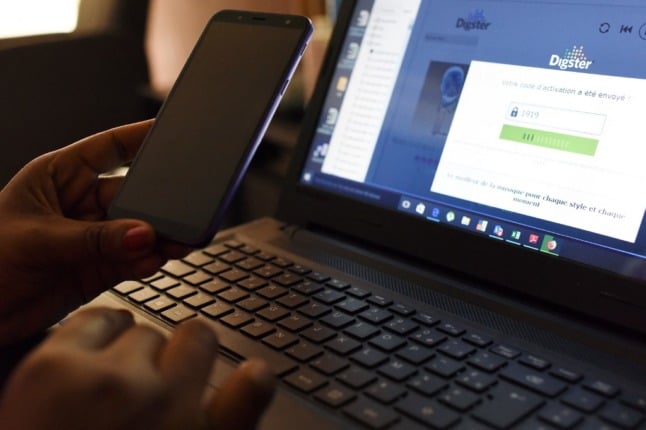 ORF content can be easily found and watched online on a smartphone or computer. (Photo by ISSOUF SANOGO / AFP)

It also said that those aged 75 or over were more likely to fall for the less common but more lucrative ‘trick’ scams – those that hint at lottery wins, for example – which account for 13 percent of recorded online scams, but cost the victim more than €500 in some 26 percent of cases.

Here are some of the most common scams doing the rounds in France this year.

The pandemic has prompted an increase in online shopping and scammers have been taking advantage by posing as delivery operators.

People may receive fake emails or text messages informing them how to track their ‘orders’, or claiming there is a problem with delivery. The emails contain a link that takes victims to a fake website designed to steal personal and financial data.

A notable scam: Criminals send you an order confirmation pretending to be from Amazon. When you click on the link, you are taken to a fake page asking for your log-in details. If you enter them, scammers may be able to access and buy things on your account, as well as stealing personal details.

Fake emails from the French tax agency or other official bodies

Tax season always brings a raft of scams. There are usually several variations on the theme, but in general cybercriminals pretend to be from the Direction générale des Finances publiques (DGFiP).

A common one informs the recipient they are in line for a ‘refund’, if they confirm their bank details via a fake web page.

Some include attachments that install malware when downloaded.

If you receive an email from a French or European law enforcement agency accusing you of pedophilia and asking you to hand over personal information, it is probably a scam.

Commonly, these emails appear to be sent by the gendarmerie, police or even Europol. The messages often look official, bearing an electronic signature and seemingly legit logos. Some of the senders even try to usurp the identity of real police chiefs.

Bear in mind that French law enforcement agencies would never ask for personal information or summon you for questioning via email. The objective of this scam is simply to get money out of you. You can read more HERE.

Beware of holiday home rental offers that look too good to be true. They very probably are. An entire villa for the same price as a relatively small studio is an offer that is likely to be a scam – even if it says ‘last-minute promotion’, or something similar.

Watch out for deposit amounts, too. The average is around 30 percent of the total cost of the holiday home. Any higher amounts – or requests you pay by unprotected bank transfers – should set alarm bells ringing.

Cryptocurrency scams are on the rise, as ordinary people try to profit from a boom that has lasted since the start of the year.

Scams often take the form of platforms that do not exist. It usually starts with an advertising banner and phishing, on social networks or by email. The most common contain an image of a well-known person.

The objective is to get the Internet user to fill out a questionnaire for which he must provide personal information, notably a telephone number which allows con artists to pressure their victims into sending money.

Another classic scam is that of fake discount codes from popular companies. These spread quickly because cybercriminals often say that if you share the codes you will get a greater discount. Clicking on any link, however, leads to a page requesting personal and financial details.

Earlier this year, Orange subscribers in France found themselves facing large telephone bills after following the instructions of a fake technician who had contacted them by telephone.

The ‘technician’ had persuaded their victims to telephone a certain number as part of a ‘test’ of their phone line. But the caller was directed to ring a premium-rate phone number overseas set up for the sole purpose of scamming victims. The longer the victim waited on the phone, the higher their bill. One woman was charged €400, according to consumer association UFC-Que Choisir.

Unfortunately, there will always be someone ready to profit from the fears of others. Numerous websites have been set up claiming to sell ‘cures’ for Covid-19, or pretending to be official bodies sending notifications about border restrictions, vaccines or aid for companies.

The messages either redirect you to a fake page to steal your details or send you an attachment to download, installing malware on your device. This could be through email or messaging services such as WhatsApp.

Earlier this year, cybersecurity company Proofpoint said that some 70,000 Netflix users in France were among those targeted by a global scam involving the streaming platform. Victims were targeted by one of two fake emails – one claiming their account had been suspended, the other seeking confirmation that a subscription was to be cancelled.

READ ALSO Are cheques finally falling out of favour in France?

Both scams required users to click a link leading to a fake web page, from where criminals hoped to mine personal details.

Not all scams are online. Some criminals have been going door-to-door, claiming to work for electricity network operator Enerdis, and gaining entry to victims’ houses to ‘update’ their smart electricity meters.

They then either steal property, or – unknown to the victim – use information easily obtained from the meter to change suppliers, without the property owners’ consent.

How you can avoid falling victim to these scams

In most cases, cybercriminals pretend to represent official companies to try and steal your details.

Basically, if you receive a message from a company and it looks suspicious or it says you’ve ordered something that you have not, then check the address the message has come from to find out if it is an official source. Be careful: sometimes the fake address is obvious. Sometimes it is less clear.

If links send you to other websites, always check these addresses to ensure they are the official web addresses of these companies.

If you spot a phishing or other type of online scam, you can report it to the government’s cybermalveillance.gouv.fr platform.

All may not be lost. Under certain conditions, banks are obliged to refund money paid for goods and services that are not provided. Full details of the chargeback – or rétrofacturation – scheme are available here.

France also operates a free Info Escroqueries telephone service on 0 805 805 817 (Monday-Friday 9am – 6.30pm) to allow people to report this sort of crime.

Consumer associations can also offer help and advice. You can find the offices of one near you via this link from the Institut national de la consommation (National Consumers’ Institute).

The reform is the flagship domestic policy of Macron’s second and final term in office, with the president determined to implement it despite fierce opposition from the political left and unions, but also the wider public.

At the start of the parliamentary debate, Labour Minister Olivier Dussopt struggled to make himself heard above loud booing and shouting.

READ MORE: LATEST: How Paris transport will be hit by Tuesday’s pension strikes

“Our (pensions) system is structurally in deficit… Doing nothing is not an option.”

Speaker Yael Braun-Pivet urged lawmakers to keep quiet, telling them: “We’re not at a protest, we’re in the assembly”.

Macron’s ruling party lost its overall majority in elections last year, even though it remains the largest faction.

His government under Prime Minister Elisabeth Borne wants to pass the legislation with the help of allies on the political right.

The government is also trying to avoid using clause 49.3 of the constitution — an article which allows the automatic adoption of a law without a vote.

Such a move would risk stoking further protests.

Left-wing opponents of the administration filed thousands of amendments ahead of the parliamentary debate beginning.

Walkouts and marches are planned for both Tuesday and Saturday, although unions for rail operator SNCF said they would not call for a strike at the weekend, a holiday getaway date in some regions.

Trains and the Paris metro are again expected to see “severe disruptions” Tuesday according to operators, with around one in five flights at Orly airport south of the capital expected to be cancelled.

“We’re counting on there being rallies so that the country’s elected representatives take into account the opinion of citizens,” Philippe Martinez, leader of the hard-left CGT union, told the France 2 broadcaster on Monday.

Last week’s demonstrations brought out 1.3 million people nationwide, according to a police count, while unions claimed more than 2.5 million attendees.

Either way, it marked the largest protest in France since 2010.

With pressure growing, Borne on Sunday offered a key concession to win support from the conservative Republicans party in parliament.

While the reform will set a new retirement age of 64 for most workers — up from 62 — Borne said people who started work aged 20 or 21 will be allowed to leave work a year earlier.

Calling the offer a “band aid”, the head of the CFDT union Laurent Berger said that the move was not “the response to the huge, geographically and professionally diverse mobilisation” that has swept France.

But Republicans chief Eric Ciotti told newspaper Le Parisien that he would back the reform, potentially securing a majority for the government.

After an attempted 2019 pensions reform that was stymied by the coronavirus crisis, the changes mark another step by reformist Macron in aligning France with its EU neighbours — most of which already have higher retirement ages than the proposed 64 years.

He aims to lift the pensions system out of deficit by 2030 by finding around €18 billion of annual savings — mostly from pushing people to work for longer and abolishing some special retirement schemes.

But while Borne and others have insisted theirs is a fair reform, critics say that women will on average have to wait still longer for retirement than men, as many have interruptions in their careers from childbearing and care responsibilities.

Opponents also say the reform fails to adequately account for people in physically strenuous jobs like builders and doesn’t deal with companies’ reluctance to hire and retain older workers.

Borne said the government would pile pressure on companies to end the practice of letting go of older employees, which leaves many struggling to find work in their final years before pension age. 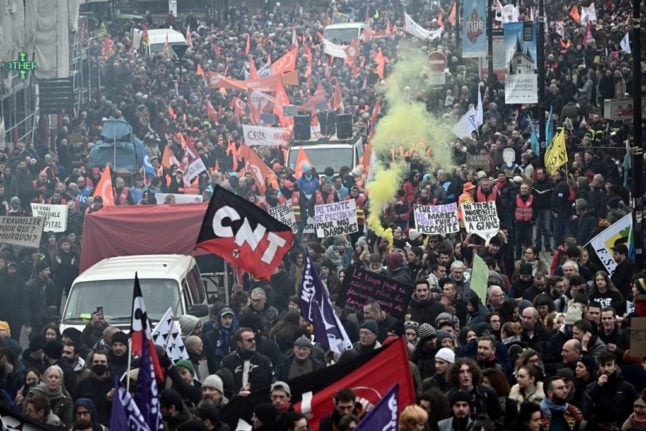